A flying car crashed near an elementary school in Vernon, British Columbia on Friday, according to a report from CBCNews. The car, which is kept aloft by a parasail and driven forward by a rear propeller, hit a fence and then a tree. Both the pilot and passenger were injured.

The experimental car is named Maverick, and CBC calls it “the fifth-ever flying car” in Canada. The Transportation Safety Board confirmed the crash, calling the vehicle an “I-Tech Maverick SP Powered Parachute.”

The pilot and passenger had to be pulled out of the tree and taken to a hospital where they were treated and released. 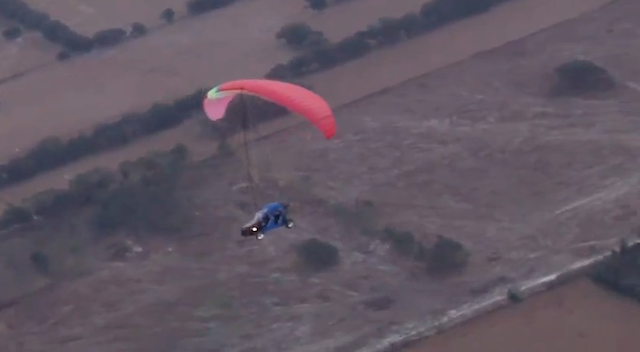 Not how I would think a flying car would operate. Kinks...I think it is one big link.
edit on 5/12/2013 by roadgravel because: Move my comment to bottom

posted on May, 12 2013 @ 08:33 PM
link
We were test flying these things around Pinal when I was but a lad. They can be a lot of fun, but are also quite dangerous in the wrong situation. I can't imagine Joe/Jane Sixpack being safe in one.

...Sorry. You had to know it was coming.

posted on May, 12 2013 @ 10:53 PM
link
I have 3600 hours flying paragliders. That motorized rig is best flown in the calm early morning or the calm early evening. That someone hit a fence is no surprise as gliders are limited to a maximum speed of about 22mph. Anything winds more than 11mph cute the glide ratio in half. Lose power or come don in a sinkhole and it becomes tough to make landing sites

posted on May, 13 2013 @ 06:44 AM
link
Flying car??? No, powered parachute. All the 'flying cars' that actually fly are nothing more that either a hovercraft, gyro-copter or airplane with folding wings. None are actual flying cars. An example of a flying car would be like those depicted in the movies Blade runner, Star Wars or the Fifth Element. None of those cars had wings.

Is it possible to have a real flying car, yes, the technology has been around for awhile but not released to the public and most likely will not be until it becomes common fare with the military. I don't see that happening anytime soon. Even if it was available to the public it would be highly automated and running on HITS. The last thing you need is car(s) falling from the sky due to some idiot thinking s/he do not have to follow the rules.

It's nice to dream though.

...Sorry. You had to know it was coming.


No wait, that must be Fred and George pulling a prank.


That looks more like a fancy parachute to me than an actual flying car. Terrafugia is building many prototypes that actually look like a car/plane hybrid, and can retract its wings. That, in your OP, is a... a... a fancy parachute, if you know what I mean... It can't take off very easily. Terrafugia's prototypes can actually make vertical takeoff. They are really neat.

Not the futuristic, $94K flying car I had in mind!

Originally posted by below
Darn.

Not the futuristic, $94K flying car I had in mind!


That looks more like a fancy parachute to me than an actual flying car.

I can't see how commuter traffic would work very well with a heavy traffic pattern full of parachutes.

A person could hurl a car through the air with a catapult and it would technically be a 'flying car'.

Originally posted by roadgravel
A person could hurl a car through the air with a catapult and it would technically be a 'flying car'.