posted on May, 11 2013 @ 01:29 PM
link
I was at a customer's home in West Tennessee repairing his internet service. He had a huge picture on his wall of Obama and several pics all over his home. The large one was the same as one on his mouse pad and I will show the pic. It quotes the Christian Bible and claims Obama was prophesied about in the Bible. It was odd because the customer was a Muslim. I questioned his pictures and he said that most Muslims believe Obama to be an Imam and even further that he is their final Imam. He showed me the Bible quotes and then began talking about how and why he is believed to be their final Imam or Al Mahdi. I just want to see what you guys think. 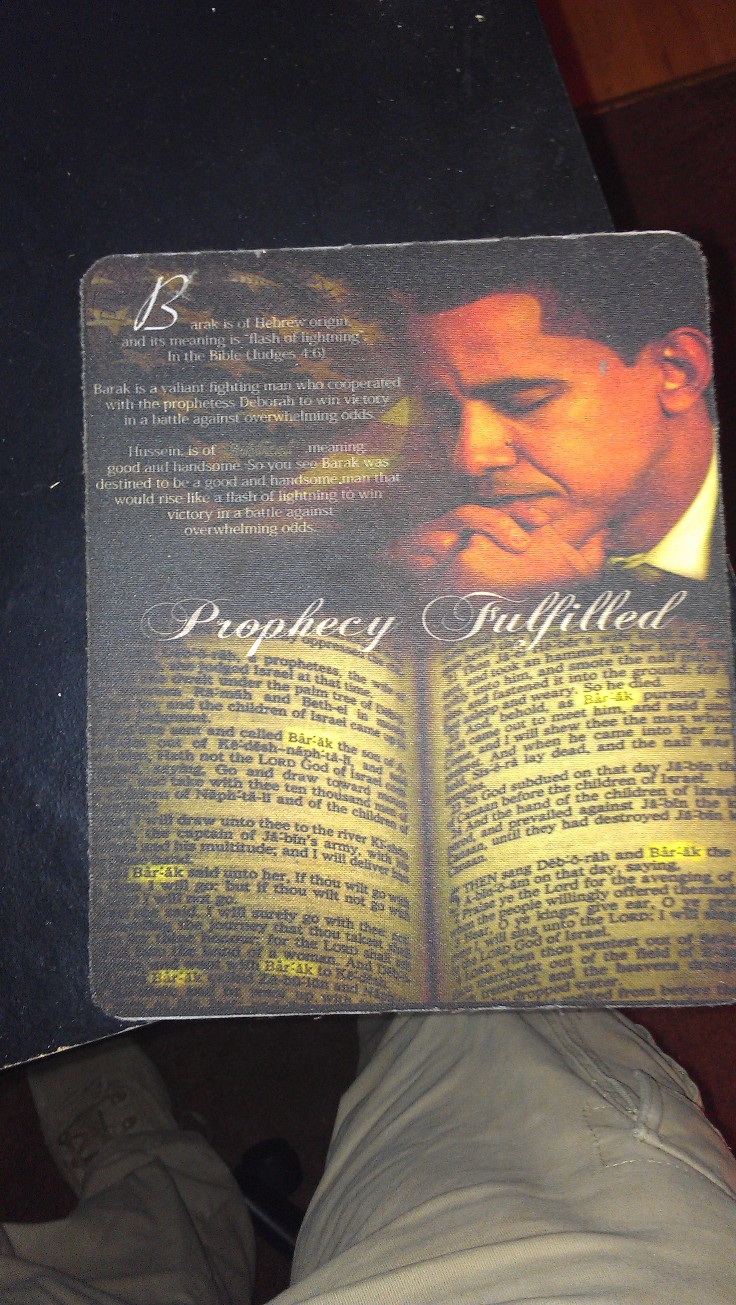 posted on May, 11 2013 @ 01:49 PM
link
Whatever it is intended for doesn't really matter to me. It's the sickening photo of him in the pose of a God/Angel/Saviour that turns my stomach because he is far removed from being even close to any of these.

I do however believe that there is a special place in Hell reserved for him.

posted on May, 11 2013 @ 01:54 PM
link
It's from a poster that was being sold at the Democratic National Convention last year. Don't take it seriously. I've seen commemorative plates that deify Elvis as the saviour. People can put whatever they want on posters. It doesn't mean he's Christ or anything.

And I wouldn't put much faith in one dude telling you that all Muslims consider Obama an Imam. For one, Obama, is not a Muslim. Two, if an Imam were in the White House I don't think the entire Muslim world would be so pissed at the US right now.


Where is the proof positive that he is not a Muslim? I have always believed he is Muslim. That can be discussed elsewhere though. The issue is not the picture so much but how much faith these people are placing in Nobama. The man I spoke with is some form of importance at the Islamic community center across the street from his home. I service their internet as well and had a ticket for it the same day. They have things there alluding to the same things as in that man's home.


People think a WHOLE LOT of things about Obama. Doesn't mean they're true.


Originally posted by jude11
It's the sickening photo of him in the pose of a God/Angel/Saviour that turns my stomach because he is far removed from being even close to any of these.

If some random group with no affiliation with the admin created it, its nothing more than ho-hum.

If it came from the admin itself, then it deserves some attention.


I kinda just brushed it off. I threw in alot of "Oh ok", and " really", and "oh wow"s
It was not worth risking my job over by any means. West TN are primarily black areas. Bolivar, Jackson, Memphis, Somerville, and most other areas are primarily black. I work all over West TN and go into customer homes and businesses everyday and I tell ya at least in this part of the country racism is very much alive and on both sides of the fence. However an email sent to us regarding customer statistics a few months ago stated that 80% of all new internet, cellular, and home phone customers in West TN are black. 80% of all disconnects due to non payment in West TN are black. I am in there homes everyday and I'm telling ya it's crazy what I see. I honestly think most people voted for him solely on his color. I was kicked out of a black woman's home because I would not give her my opinion on Nobama the day after the Benghazi incident. She said by my refusal to give my opinion I obviously hate black people. The few times I decided to engage in some form of conversation about him with a customer they knew nothing at all of his politics or his stand on any issues. They explained to me that Obama was going to save them or Obama was going to pay their mortgage for them or they didn't care about his stance as long as he would deliver their "people" from the gutter as one woman put it. It is really hard to see these things daily.
I actually had a teenage black girl answer the door and yell to her mother " MA SOME OLD WHITE MAIN AT DE DOE"!! Why I gotta be old or white? If I ever addressed a customer as old or black I would be sued in a heartbeat.

he said that most Muslims believe Obama to be an Imam and even further that he is their final Imam.


I'm not sure who created it. I looked at the back and it was really worn and had some publishing company listed on it but it was not readable. Kinda funny though they had a stack of paper money sitting on a table that had Obama's face on it and it said in Barack we trust and a huge picture of Mandela on their bedroom wall yet at the same time had an apartheid symbol hanging on a doorknob. I actually enjoyed speaking with him but he was way out there in alot of things he said.


Are you calling me a liar?

Are you calling me a liar?

no just your source


My source has publications depicting Nobama as a prophesied savior. My source is a muslim who has the keys and other resources for the Islamic Community center across the street. Just Google Obama the Mahdi? and see what you find. I'm sure they do not all believe this but apparently some do.


are you really trying to say that Obama is the Mahid, Isa, or to put simple "the second coming of Jesus"?


Shoot no! By the way the Mahdi will not be the second coming of Jesus. Muslims believe Jesus was simply a prophet.

Originally posted by Christian Voice
reply to post by OtherSideOfTheCoin


Shoot no! By the way the Mahdi will not be the second coming of Jesus. Muslims believe Jesus was simply a prophet.


sorry my mistake you are correct, was working of the top of my head, even so to claim that he is the Mahdi is crazy, and it does imply that the secon coming of Isa is coming.


Believe me I believe this is all craziness. Just wanted to see what ATS thought of it. I truly see some crazy stuff going into people's homes.

posted on May, 11 2013 @ 09:03 PM
link
Somebody is trying to make a buck.. You forget the G Bush action figure in his Mission impossible flight suite.

Or the papal bobble heads Give it a rest.

An individual's opinion about who is, or is not, a religious savior is about as relevant to the rest of the world as that page is to Chuck Norris's actual super powers.

A friend of mine was attending a 12-step rehab program. When he was told that he needed to pray to a higher power he chose to pray to the rain gutter above his porch because he's an atheist. Whatever works!

posted on May, 12 2013 @ 02:07 AM
link
I wouldn't mind hearing some more stories from your job, I'm sure you get the old white guy alot, I know at my job I get called white all the time but if I turn it around I'd be sued in a heartbeat.