Authorities say a 3-year-old Florida boy has died after shooting himself with a gun he found in his uncle's backpack.

The shooting happened Tuesday night in a bedroom Jadarrius Speights shared with his uncle at an apartment complex in Tampa. Authorities say the uncle, 29-year-old Jeffrey D. Walker, has been charged with culpable negligence.

posted on May, 9 2013 @ 01:22 AM
link
Very sad that the child died. I've been hearing a lot of these kind of stories lately. Too many kids dying because of guns left lying around

I just hope accidents like this won't be exploited by the government for their gun agenda. These kind of accidents can be prevented from gun safety courses, not gun "safety" laws.

And the fact that so many accidents similar to this are happening in just a couple of weeks make me rather suspicious.

usnews.nbcnews.com
(visit the link for the full news article)

You can want in one hand and s@#$ in the other and see wich one fills up first because there is no way they wont exploit stories like this to further their agenda
edit on 9-5-2013 by goou111 because: (no reason given)

posted on May, 9 2013 @ 02:06 AM
link
Why are Patriots and Preppers being molested by Gun Laws, yet Gang-Bangers are becoming more armed, without interference?
Fast and Furious Gun Running to the Poverty Stricken maybe?
Is this population control for America's Poor? 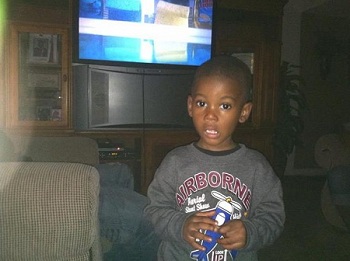 
#BREAKING: A 2-year-old boy has died after a self-inflicted shooting in Corsicana. We have a crew in Corsicana now gathering details

#BREAKING - more - Police tell CBS 11 News the child found a handgun and accidentally shot himself in the head.

posted on May, 9 2013 @ 02:21 AM
link
The gun wasn't just laying around. It was in a backpack. Children are curious. This kind of thing happens. Children sometimes walk out in the middle of the street and get hit by a car. Unless we start banning cars on roadways, I dont see anything more in this than a beautiful child accidently pulling the trigger of a gun he found while digging, killing himself. It's a horrible thing. No child or family should come to that fate, but things like this happen. I dont see the fault in the owner except that he didn't anticipate what took place. He was certainly short sighted, but that shouldnt be a reason to be thrown in jail. He'll be in his own prison for this for the rest of his life. That should be enough.

This is in the media in attempt to make people believe that we need more regulation on firearms, nothing less. The reason you hear more about it in the news is, it's become an agenda and nothing else. If it wasn't you wouldn't hear one thing about it. It's happened always since there were guns. You only hear about it now because of what is trying to be pushed upon us.

Even still... Gun deaths have FALLEN. News like this plays upon emotions to hide that fact.

My prayers and heart felt sorrows goes to that child and his family that will have to endure this all of their lives. Anything more is simply pouring salt on an open wound. I'm certain the uncle didnt mean for the child to find the gun. It's not like throwing him in jail is going to do a damn thing to ever prevent it from happening again. Even if the uncle walked free, does anyone honestly believe that he would ever have that gun in his backpack again? Or even own another one for that matter (unless he's a gangbanger... then that's a whole different story and still nothing worthy of more gun laws but against them).

I dont feel that this should be a hidden story tucked away in obscurity, but I think these same stories are used against gun owners and are agendas being forced upon us. That simple.

Also, why did the first thing he think to shoot was himself? Not impossible but improbable

Don't want to speculate too far, but maybe the uncle did him in...I mean, his finger prints would of been on the weapon in either cases. He would of just needed to make the child touch it first...

posted on May, 9 2013 @ 02:52 AM
link
this is an unfortunate event. when someone owns a handgun, there are certain responsibilities that go with it.

just as owning a car, or motorcycle. they may be shiny and cool to our children, but we as adults, have to be responsible enough to teach the children the proper should and should nots about the shiny new toys. everything looks like a shiny toy to a toddler. if we leave our keys in the ignition, and the car running, should we let our toddlers play inside of it, absolutely not! I see this as an unfortunate event, but a preventable one. unfortunately this will further the gun debate with more restrictions/freedoms taken from us.


Why are Patriots and Preppers being molested by Gun Laws, yet Gang-Bangers are becoming more armed, without interference?
Fast and Furious Gun Running to the Poverty Stricken maybe?
Is this population control for America's Poor?

Why do you assume that because the family was black that they are automatically "Gang-Bangers"?

Police say he has a concealed weapons permit.

I think your blatant racism is showing. So if a white guy with a gun is a patriot and a prepper, but a black guy has a gun, he's automatically a gang banger?

think your blatant racism is showing. So if a white guy with a gun is a patriot and a prepper, but a black guy has a gun, he's automatically a gang banger?

This is Americal everyone has a gun lol

You can want in one hand and s@#$ in the other and see wich one fills up first because there is no way they wont exploit stories like this to further their agenda
edit on 9-5-2013 by goou111 because: (no reason given)

When does this agenda stop being an agenda and start being common sense applied to an horrific situation?

And don't tell me they had cias and actors sneak into the house and put the gun in the kids hands to fake it.

When do you stop and think, something isn't working properly. How do you fix it.

At some point, if you don't apply the breaks, your "that brick wall is an agenda to make me hit the breaks." argument becomes a fatal accident.

I know there are people who want to see guns completely off the streets of America. I hope that common sense keeps them at bay, just as it should also keep you from throwing everything into the "must not let the government win!!" basket and turning everything into a plot to attack your rights.

As the kids keep dying, I hear rising concern for everyone but the victims. It should be the other way around.

Originally posted by BoogieMan911
Why are Patriots and Preppers being molested by Gun Laws, yet Gang-Bangers are becoming more armed, without interference?

Because patriots and preppers are law abiding and gang bangers are criminals?

At least that makes sense.

Bit like asking why you are having people tell you to put the fire in your house out, while you criticise them for letting the house in the next neighbourhood burn to the ground.


This is Americal everyone has a gun lol

The man was a "law abiding gun owner" with a legal firearm, but the poster I was replying to, assumed that the man was a "gang banger" simply because he is black.

The pathology of that member's post is very telling about the kinds of people who support gun rights.


Originally posted by theRhenn
This kind of thing happens.
...
I dont see the fault in the owner except that he didn't anticipate what took place.

Let me tell you, then. A responsible gun owner doesn't leave a loaded gun ANYWHERE that a child has access. This is negligence on the part of the adult.To say "this kind of thing happens" is a cop out. The uncle should be criminally charged.


Originally posted by theMediator
I find it a bit surprising how a 3 year old had the strength in his fingers to properly shoot himself?

Also, why did the first thing he think to shoot was himself?

I doubt he intended to shoot himself. He was probably playing with the gun and accidentally touched the wrong part while it was pointed in the direction of his head.

BS, he should be charged with manslaughter or something more serious. I'm tired of reading stories of irresponsible folks who leave LOADED and UNLOCKED guns just laying about, when in the presence of small children! It is ridiculous, that just a TINY BIT of common sense could have prevented this tragedy.

I'm a gun owner myself, but would NEVER presume to have LOADED or UNLOCKED guns anywhere a child can get to them. I keep my weapons UNLOADED and LOCKED up, and I don't even have small children in the house (though my friends and their kids come over). Still, I know they are safely hidden and locked away from curious little ones.

The gun wasn't just laying around. It was in a backpack

It was LOADED and UNLOCKED, which to curious kids is the equivalent of just laying around.

No child or family should come to that fate, but things like this happen. I dont see the fault in the owner except that he didn't anticipate what took place. He was certainly short sighted, but that shouldnt be a reason to be thrown in jail.

BS, he shares a room with a 3 year old, but leaves a LOADED and UNLOCKED weapon in his bag? Short-sighted? No, blatantly irresponsible, and shy of pulling the trigger himself, he killed that kid. Things like this don't just "happen". If he was a responsible gun owner, the tragedy never would have occurred. As one who has been through his CCW class, he would have learned proper safety steps (and for less than $10 for a trigger lock, he could have prevented it), he simply chose to ignore them, and now his nephew is dead.

To be honest, I'm kind of taking all of these recent stories as an omen, and this week, I'm going to buy some trigger locks for my guns, even though they are already secured in a well-locked closet. I have a moody 18 yr old stepson, and even though it is an exterior door lock, not sure I trust in that alone to keep them secured. Of course, he isn't aware that they are kept there either, but I think I'll feel better with this extra layer of security.
edit on 9-5-2013 by Gazrok because: (no reason given)