posted on Apr, 30 2013 @ 02:21 AM
link
We, the citizen scientists of Quake Watch on ATS noted that there was a global slow down in magnitude 5 quakes just before the double mag 8 (8.6/8.2) off Indonesia last April. It is looking like the same lull in activity is occurring again.

Before anyone who does not know me says I am being sensationalist, I am not. That is not my way. I am asking what others think based on the evidence of last year, and not predicting anything or stating it is about to happen. 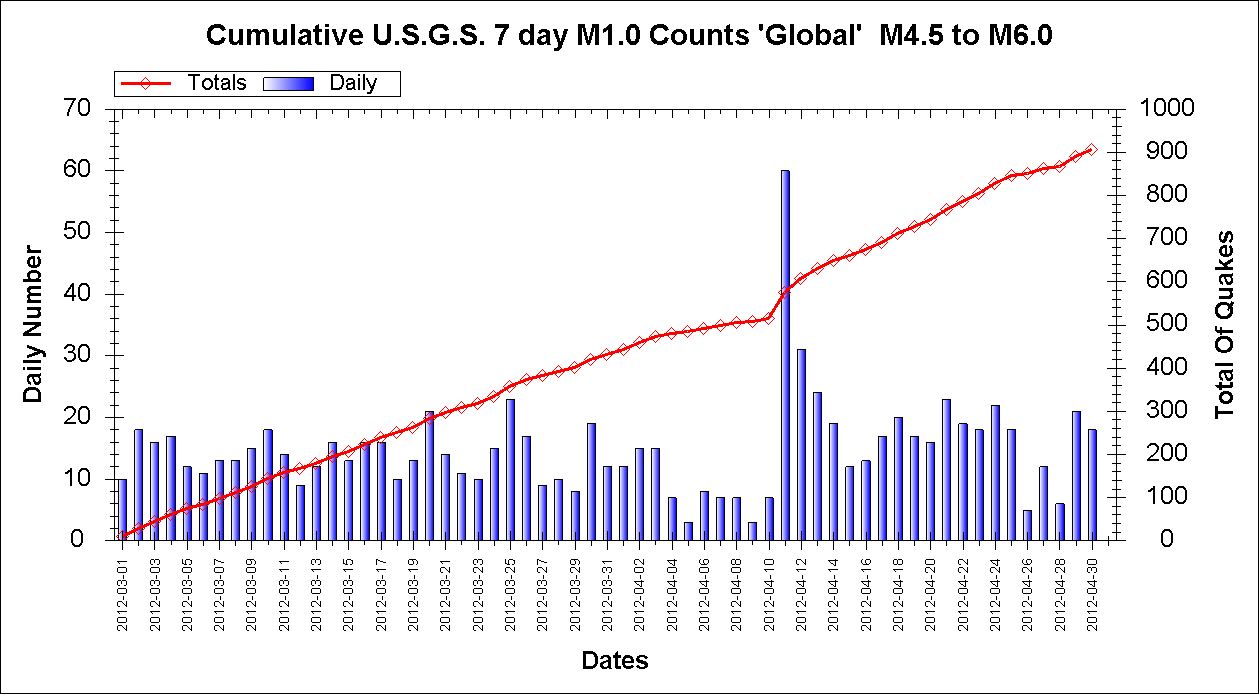 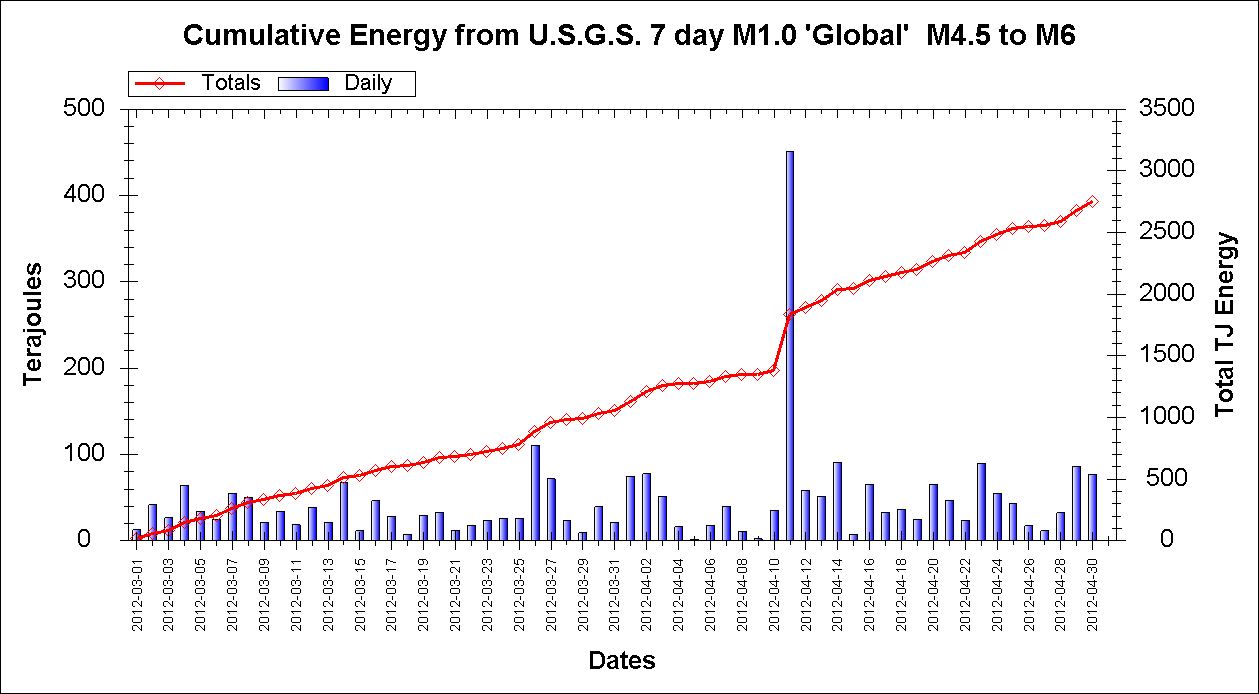 You can clearly see the slowdown right before the double mag 8 quakes. Basically from 04 Apr 2012 to 10 Apr 2012 the global rate of mag 4.5 to 6.0 flattened. The same is visible on the energy graph, but it is not quite as clear.

Now we move to this year 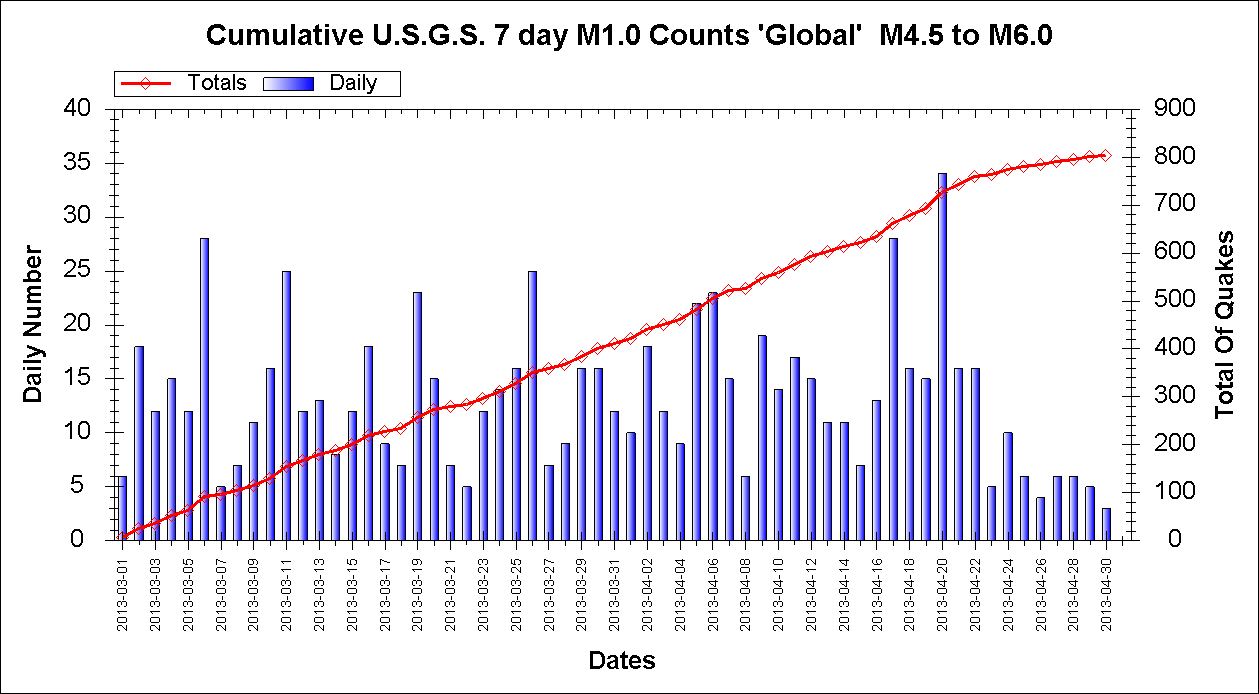 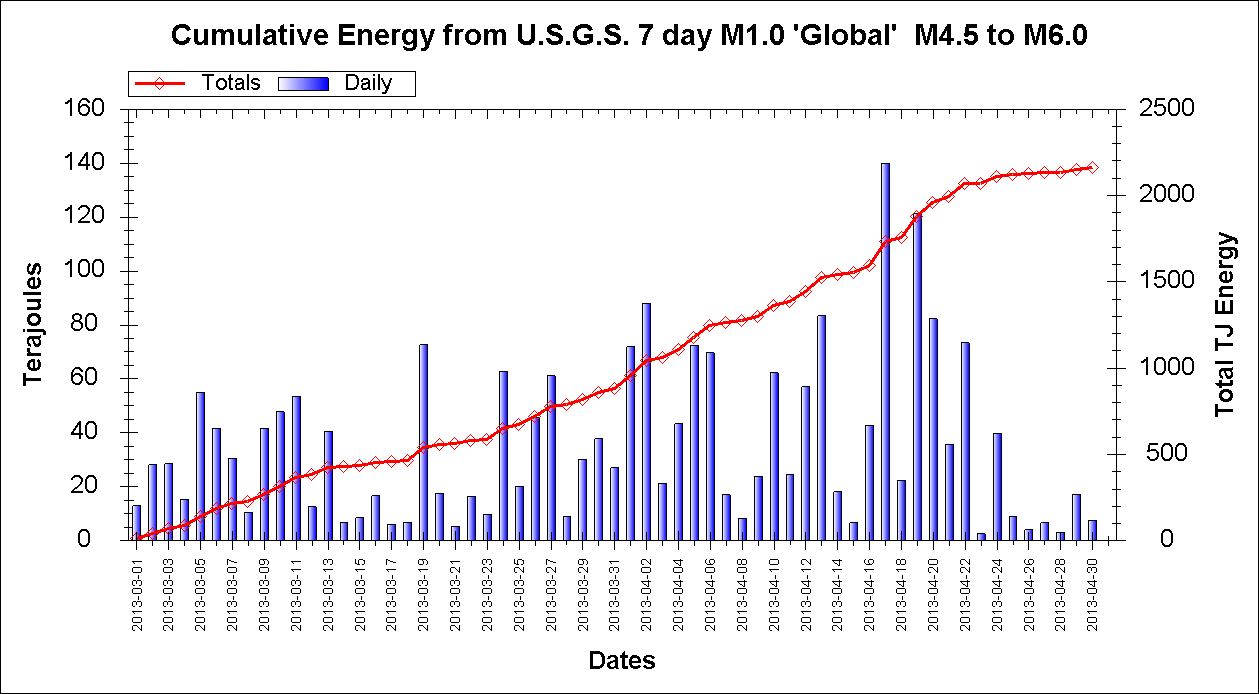 Before the Mag 8 this year we can see a similar, but not quite as marked, lull in energy and counts. 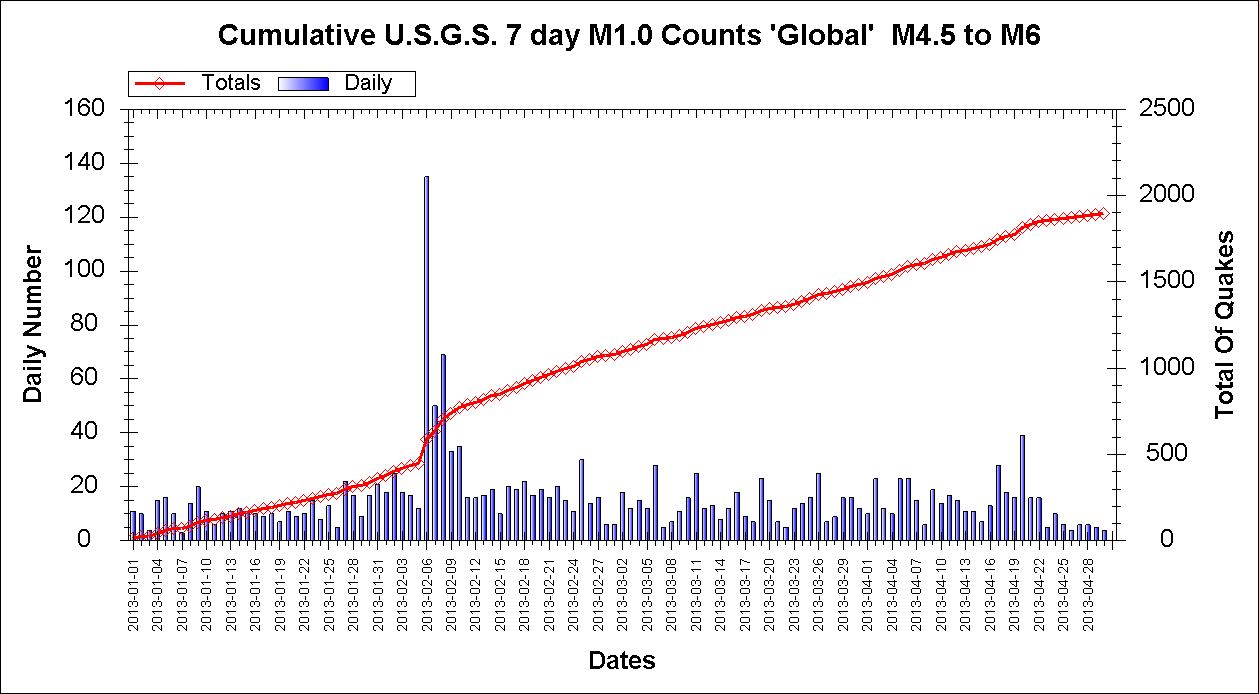 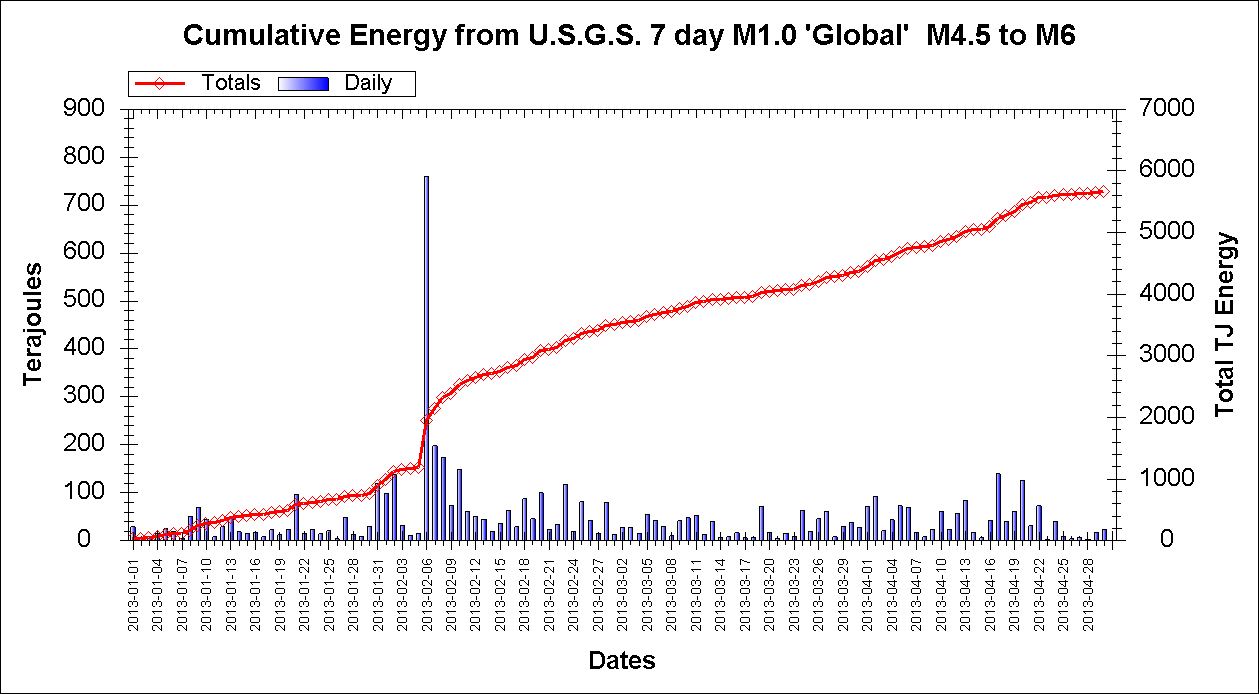 Note the very flat energy curve just before the mag 8.

So, are we due another? My own feeling is no, however I would say that we do not so often see this flattening of the curve and more often than not this precedes a large quake when it does occur. It is possible we could be in for something in the mag 7 range, but not in my opinion a mag 8. If we are then it is likely to be within the next few days.


As always, an interesting thread!

I would be curious to see if this plays out for other notable quakes. Do you plan on stretching out the dates and taking a look for a bigger pattern? (in your spare time. )

As you know, I like to pick up on patterns but am not as nearly scientific about it as you and often can not even explain clearly the pattern I am seeing. However, I have been noticing some odd stuff the past couple of weeks and while I am not predicting anything either, I have been waitin for that dark maroon number to pop up again.


I would be curious to see if this plays out for other notable quakes. Do you plan on stretching out the dates and taking a look for a bigger pattern? (in your spare time. )

Amongst the myriad of other things that I take upon myself, yes. I think my weekly geophysical report may have to stretch to monthly even though I have automated quite a bit of it. It is the images that take the time.


Now that is very strange. I don't seem to have that one in my lists

Found it! (NOT just in case anyone is worried) 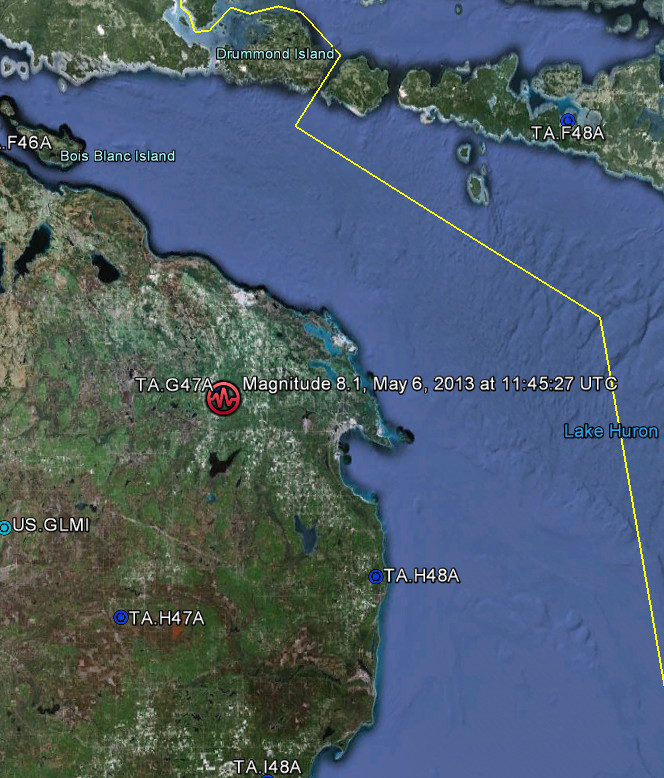 I havn't been watching for a long time now, so i am not up to date, but will keep a look out on the area

I don't seem to have that one in my lists

Oh I guess this one will be revised three times.


I also hope you're wrong.


Hi kdog. Yes I have tried contacting those guys with no success. It would be great to get access but perhaps they don't want people seeing their errors?

I have to say IF it was California then it would not be a mag 8 almost certainly.

ETA: By the way M8 on that site is the algorithm and not the magnitude.
edit on 30/4/2013 by PuterMan because: (no reason given)

Originally posted by PuterMan
reply to post by kdog1982


Hi kdog. Yes I have tried contacting those guys with no success. It would be great to get access but perhaps they don't want people seeing their errors?

I have to say IF it was California then it would not be a mag 8 almost certainly.

ETA: By the way M8 on that site is the algorithm and not the magnitude.
edit on 30/4/2013 by PuterMan because: (no reason given)

Yes,I know what the M8 is,but thanks for pointing it out.

After playing around there for awhile,I have a question.

When was the last big one in Afghanistan?There numbers where pretty high for that area,although I do not know how old the data is.

The Beta search on USGS gives these since 1973

You probably know what I am going to say

The only quadrant of the circle of fire that has not seen some decent stress release is the North Eastern section, ie, West Coast USA. That zone has to go off soon. I just hope the quake stays away from the major cities.

There has been no quake as yet to balance what the Japanese Quake did. To put it very simplistically, if Japan moves however far it did, then the whole plate has to move eventually to compensate.

Scary thought and since it's you as the OP, bloody scary thread.


You also know that I too agree with you about Cascadia.

This may just pass through with no notable effect, but if it does not then we need to look at previous patterns such as this - I need to do that anyway.

The problem for humanity is understanding time as we see it and time as Mother Nature sees it. We think in terms of short term, Mother Nature has a longer term idea of time.

The problem I have is that the longer Cascadia and associated faults wait, the more potent the quake will be. There has been little meaningful relief in this area for a long time as humans view it.

It WILL happen. That is a scientific certainty. The question is when. It seems to me that there has been an uptick in Government preparedness in the past several years. Perhaps they know something we don't. They certainly would not warn anyone if they did know.

posted on Apr, 30 2013 @ 08:00 AM
link
I think you may be right about a bigger quake in the near future. There are patterns to these quakes, we just haven't been able to pin down the pattern. I think as there is something with the earth's locked alignment with the North star area that makes stress on the earth at the spring and fall equinox times. In the fall here in the north it causes hurricanes, in the spring here in the north it causes tornadoes and earthquakes. It has to do with the gradual pull and push of the sun on the earth as it crosses the equator. The tilt buffers it a little spreading it out as the earth turns though. If the earth wasn't tilted it would be more aggressive, but then again the forces wouldn't be there. I am sure the moon position also has something to do with this sometimes to. There are a lot of things connected with this, piecing this together is the hard part.

What you say about a reduction of 5 plus events can possibly be a way of telling of an increased chance. It may not be completely accurate but may be a warning sign of increased probability. That in itself is worth it.


Can you prove that?

Technically speaking it is possible that they still might at this stage add earthquakes to the lists - in fact anything up to 2 years.

What I actually said in the title was

Agreed not the best constructed headline and I even did a double take myself after I posted it.