posted on Apr, 21 2013 @ 12:50 AM
link
Well this just came up on my news feed and thought it needed attention. I was glad when I heard he was captured because then maybe we could get some answers. This whole thing is fishy to me, his brothers dead and now hes sedated and his throat injured? Just abit too convenient for me.

edit on 21-4-2013 by ProspectPhilosopher because: (no reason given)

So much for miranda & due justice

I dont see how Americans can keep paying taxes and funding this crap, after being victim/witness to one manufactured Satanic sacrifice, after the bloody next.


Yeah it ridiculous things seem to be getting really weird down there. They couldn't kill him but they still silenced him.

posted on Apr, 21 2013 @ 01:08 AM
link
Hopefully it will work out for him. Give him enough time to get over the cop-hate after what they did to his sibling, let him not say stuff that would make him a pushover. Because the evidence is piling up he didn't do it. He went out with a backpack.

Most likely they punished him with an antypsychotic. The first dose is the worst.


What if he actually did suffer an injury to his throat area. Jeez..he was in almost critical condition last night when taken in.

What's the matter with you all, who can't conceive of the fact, he had serious injuries...we're not the Doctors who treated him, we don't know the extent of his injuries. Healing takes time. Patients are sedated to help them heal.

survived 20 hours with a bleeding bullet hole in his neck

Originally posted by Lakeview
Reply to post by Darth_Prime


that is what i thought, but it seems in situations like these many things are defied,

take for instance the passports found in the burned rubble of 9-11, an dnow surviving for 20 hours with a neck wound from a bullet

Or just install a "stephen Hawking speaking device", and everything will be said in an "annoying" robotic voice.

Silence can be bypassed.

posted on Apr, 21 2013 @ 01:51 AM
link
I am curious about the possible discrepancy between Watertown Police Department's claim that the F.B.I. negotiated with D. Tsarnaev for 20-30 minutes, yet recent reports suggest his wounds prevent him from speaking.

Police use "flash-bangs," devices meant to stun people with a loud noise, and start 20 to 30 minutes of negotiation with Tsarnaev.

Perhaps the "negotiation" was one-sided; in which case, this discrepancy only rises to the level of hyperbole

The wounded teen, who was lying in his own blood, didn’t surrender easily. An FBI agent negotiated with him for more than 20 minutes, Deveau (Watertown Police Chief) told CNN.

posted on Apr, 21 2013 @ 02:14 AM
link
Heres what Tsarnaev could tell us.. how FBI was investigating him since he was 12 and placed him at the Marathon thus saw the perfect opportunity to nail him & big bro for this publicly staged event..

In addition to being hunted down like a rabid dog, among other government atrocities.

Originally posted by Lakeview
Reply to post by Darth_Prime


He wasn't bleeding for 20 hours weird. He was just bleeding.

It's quite convenient, isn't it. They could have said he died from his injuries. But that's too conve. I mean, that's too obvio.. I mean that's too silly to consider. So they shoot him in the neck, then sedated him so he cant talk, and this is so they can't ask him questions. Which they would have done, to .. umm, oh yeah, tell the media that he is a jihaddy maniac.

It's in the fbi handbook on how to control the masses with confabulation. It works. You can see it working on ATS.


... do you people not listen to yourselves..

posted on Apr, 21 2013 @ 02:23 AM
link
Not only does he have a throat injury , and is sedated, he's also intubated....kinda hard to speak on all three ....so either he really is hurt or they need time to concoct a story , BUT I would think IF this were manufactured they would have the entire plan laid out long before executing it......OR....maybe they really were 2 misguided , hateful foreigners....who the hell knows , not us, and we never will...I love my country (USA) but I do not trust my government AT ALL.
edit on 21-4-2013 by ujustneverknow because: typo

Originally posted by Mianeye
Well luck is, he didn't loose his hand, so he will be able to write, or learn him some sign language.

Or just install a "stephen Hawking speaking device", and everything will be said in an "annoying" robotic voice.

Silence can be bypassed.

If the bullit didn't hit any main ateries, the bleeding will stop after a short time, or at least slowed, people have survived bigger damage for longer time in historie.
edit on 21-4-2013 by Mianeye because: (no reason given)


Sure they have. And next week you'll be saying that people can have their legs blown off and not die on the spot.

Or that people can fall out of planes and hit the ground when their chute fails, and not die.

Or that someone can be attacked by a shark and not die.

posted on Apr, 21 2013 @ 02:25 AM
link
I'd want to be sedated too If I was under that much stress and that badly beaten. He'll talk in time.
Remember people, guy is hurt pretty bad so don't start bitching and moaning in 5 days when he still hasn't said anything. - let's all use a little common sense. Amen.

posted on Apr, 21 2013 @ 02:44 AM
link
What about this pic when he is sitting on the side of the boat appearing to surrender yet he still suffered multiple shots to the neck and stomach 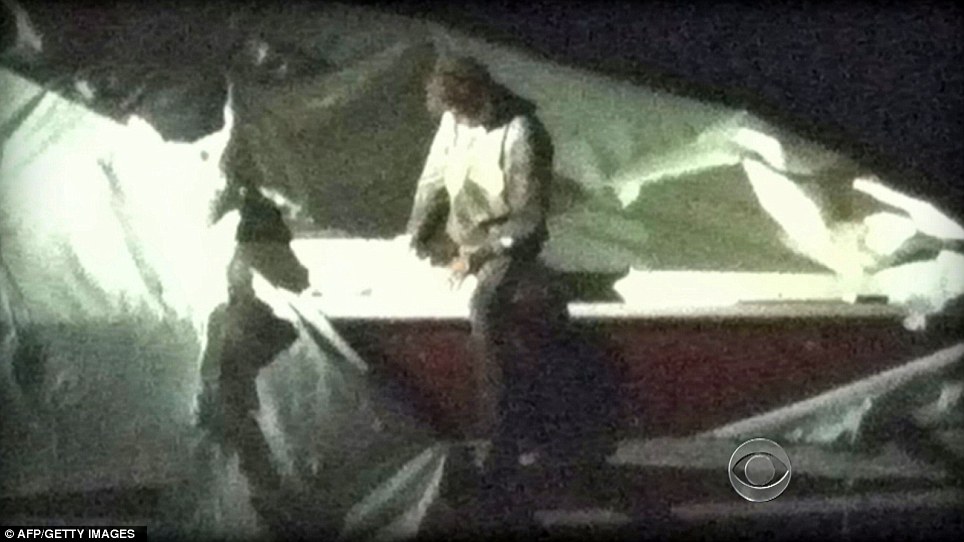 they said he got shot in the neck during the alleged gun fight after which he evaded police for 20 hours,


And the scanners said he was holding weapons well the picture even the helicopter ones dont show him holding any weapons.


Every image released so far during the arrest / capture is framed in such a way as to almost entirely obscure the suspect's face.

Also, as far as resolution, the released photos all seem to be very low resolution, further obfuscating things.

What legitimate motivations on the part of the various agencies involved would explain this? I am at a loss.


edit on 21-4-2013 by PointDume because: Clarified what images I am referring to