This was brought to the member's attention by Iambros56 in the following thread but I thought it deserved its own thread.


I also made a thread about this Here

posted on Apr, 20 2013 @ 11:16 PM
link
I'm fine with the other threads. Mods please act accordingly. The important thing is just to get the info out and for people to archive the video and if possible get the original photo.

Originally posted by ipsedixit
I'm fine with the other threads. Mods please act accordingly. The important thing is just to get the info out and for people to archive the video and if possible get the original photo.

posted on Apr, 20 2013 @ 11:44 PM
link
I cannot say definitively one way or another, but in the high resolution pics I have to say it does appear to be his elbow. And I'm no shill, I fully believe that this whole thing stinks to high heaven.

Now... What I do find interesting, in every copy of the pictures of this suspect leaving the scene, directly behind him and his arm there appears, to me, to be an edited portion of the picture - directly where his backpack WOULD be. If you look closely, it almost looks like a discoloration in the bricks in the building behind him. It's very strange.

I'm sure some will say it is a part of the bricks or building, but to me it looks just like an edit job. To remove the backpack maybe? From the security photos released of the suspects we know Suspect 2 had his backpack slung over his right shoulder. So this area edited out would be where it would be sticking out.
edit on 20-4-2013 by PatriotGames2 because: (no reason given)

Originally posted by elouina
Umm... That is his left arm that is being called a backpack. This thread is a fail.

I tend to agree.

Originally posted by ipsedixit
I am no longer convinced Dzhokhar Tsarnaev (Chechen 2) has his backpack with him.

His pack was white and carried on his right shoulder, which would put it behind his body in the photo in the video.

Apologies, if I have mislead people. I am sorry, but the whole question is back up in the air for me.

Of course I still haven't heard an explanation of the two unexploded bombs found on the scene. Who planted those?

In the photo in question, his right shoulder does look as if it might be laden with something, i.e., the backpack. For what it's worth. 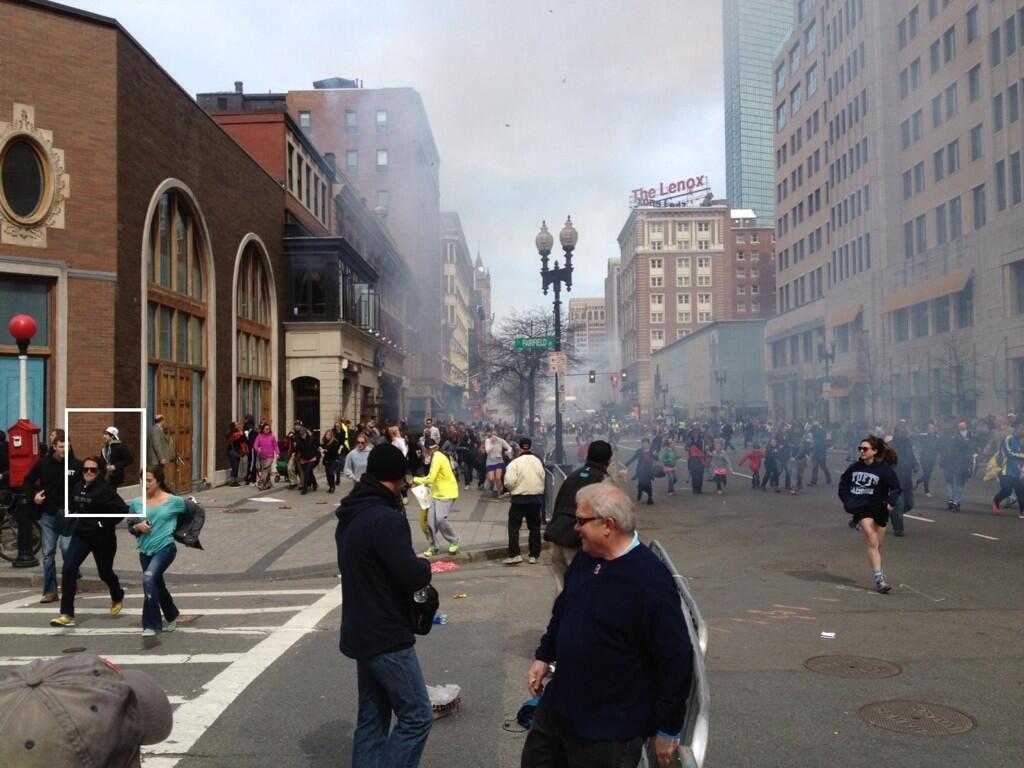 Originally posted by ipsedixit
Of course I still haven't heard an explanation of the two unexploded bombs found on the scene. Who planted those?

posted on Apr, 21 2013 @ 02:01 AM
link
Dzhokhar Tsarnaev, the younger brother of the two, was carrying a white backpack and was photographed at the scene of the 2nd bomb explosion. People looking for photos of him might remind themselves of that fact if they are looking at tons of photos. It would help to narrow things down a little.

The backpack associated with the first explosion was said to be black in some reports.

Just wanted also to include a reference to a report that two unexploded devices were found. Warning: Graphic content on the page.

CBS reported that Rep. Bill Keating confirmed there were two unexploded devices found - one at a hotel in Copley Square and another at an undisclosed location, possibly beneath bleachers.

posted on Apr, 21 2013 @ 03:46 AM
link
In this video a doctor describes the wounds that Tamerlan Tsaraev was observed to have suffered. Shrapnel, thermal trauma possibly from blast, multiple gunshot wounds “couldn’t count”.

This is an excerpt from an Associated Press story dated April 21, 3:30 AM EDT, in which the Watertown Police Chief describes the shoot out with the Tsaraev brothers:

During the long night of violence leading up to the capture, the Tsarnaev brothers killed an MIT police officer, severely wounded another lawman and took part in a furious shootout and car chase in which they hurled explosives at police from a large homemade arsenal, authorities said.

"We're in a gunfight, a serious gunfight. Rounds are going and then all of the sudden they see something being thrown at them and there's a huge explosion," Watertown Police Chief Edward Deveau said Saturday of the melee.

The chief said one of the explosives was the same type used during the Boston Marathon attack, and authorities later recovered a pressure cooker lid that had embedded in a car down the street. He said the suspects also tossed two grenades before Tamerlan ran out of ammunition and police tackled him.

But while handcuffing him, officers had to dive out of the way as Dzhokhar drove the carjacked Mercedes at them, Deveau said. The sport utility vehicle dragged Tamerlan's body down the block, he said. Police initially tracked the escaped suspect by a blood trail he left behind a house after abandoning the Mercedes, negotiating his surrender hours later after an area resident saw blood and found the suspect huddled in his boat.


Do these two accounts agree with one another? Are there gaps that need to be filled into the Chief’s account?


At the end if the day, conspiracy or not, these guys were muslim extremists that spent their time listening to sheiks on YouTube preach violence against Americans. It was only a matter of time before they acted or inspired others to act against America. I feel safer today that they are both off the streets. Are they scapegoats of a large Craft-Blackwater-Government conspiracy? A few pics of bacpacks are not enough proof.

posted on Apr, 21 2013 @ 04:02 AM
link
You could almost see the two brothers as being somehow involved in the drill, but something goes wrong and Tamerlan, who doesn't know he put down a real bomb, didn't clear the area according to plan. When the bomb goes off he is injured with shrapnel, but gets away. The younger brother, Dzhokhar, leaves the scene with an undetonated bomb in his pack and gets together with his brother later, who tells him what happened.

Originally posted by curlygirl
reply to post by ipsedixit


At the end if the day, conspiracy or not, these guys were muslim extremists that spent their time listening to sheiks on YouTube preach violence against Americans.


Like Lee Harvey Oswald was a commie sympathizer who supported Castro . . . at the behest of somebody?

It was only a matter of time before they acted or inspired others to act against America. I feel safer today that they are both off the streets. Are they scapegoats of a large Craft-Blackwater-Government conspiracy? A few pics of bacpacks are not enough proof.

They may be bad but I'm not convinced that there isn't more to this.


Originally posted by ipsedixit
Of course I still haven't heard an explanation of the two unexploded bombs found on the scene. Who planted those?

Is it not possible the reports of 'devices' found (areas were Newton and St James/Trinity street I think) turned out not to be devices after all? At that particular time any unattended bag or suspicious object could have been investigated, leading to reports of more 'bombs'.

I don't think it is right to presume A) that these 'devices' must also have been pressure cooker bombs and B) someone must have 'planted' them or carried them in a rucksack.

There is a source saying one of these reports was not accurate.

The Boston Globe writer Neil Swidey says "Newton Police captain tells me it's not true that one of the unexploded devices was found in Newton. # of bags checked out, nothing found."

posted on Apr, 21 2013 @ 07:04 AM
link
Whether or not other devices were found is probably not completely clear and might never be clear, especially if there were unexploded devices found and their existence is being denied by authorities.

Be that as it may, a more pressing problem for the authorities is how did Tamerlan Tsarnaev get shrapnel wounds?

The obvious answer is that he's just a dumb bomber whose bomb went off before he could get away from it. That happens sometimes. Bombers blow themselves up, or come close to doing so.

Unfortunately both explosions happened within a few seconds of each other. That argues against a misfire of one of the bombs or a miscalculation on the part of the bombers. Errors don't generally coordinate themselves.

If there was no error, why did bomber Tamerlan get caught in his own bomb?

Because he didn't know he was a bomber.

The shrapnel wounds to Tamerlan are a big problem. The next important press conference will be the one where the doctor revises his opinion and says there were no shrapnel wounds on Tamerlan.

posted on Apr, 21 2013 @ 07:22 AM
link
It seems like every attack that happens these days, you guys try to defend their innocence by claiming that theres a conspiracy. Im not saying that there is or isn't a conspiracy here but, couldn't atleast one of the latest crazies be responsible for the attacks that are claimed they committed? If judgement was left up to ATS to make, then all the latest killers would walk free...

edit on 21-4-2013 by strafgod because: Got my theres and theirs confused

If the US government wasn't so habituated to framing people for "political crimes" I would say you were right.


Well like I said it was a good question though that needs answers. I just hope the government answers all of our questions so we know with 100% certainty if there were others at the race or not. Likely not, but I think it would be prudent for them to investigate this further.

The real conspiracy here is, is the government hiding info from us to prevent fear and panic? Perhaps there are folks sitting in their homes thinking they are safe now and they are not.