Looking for life beyond our own planet

posted on Apr, 20 2013 @ 05:25 PM
link
Right now, I'm watching all kinds of YouTube videos about aliens, UFOS, the men in black, etc. All conspiracies relating to aliens. But I do not want to discuss that because it has already been covered many times before. What I want to discuss is scientific thought of alien life beyond our own planet. Even though I'm a person who loves a good conspiracy; I know that most likely they're either hoaxes or taken out of context. However, that doesn't mean life doesn't exist beyond our planet. We just haven't found any evidence and currently science has hypothesis that life most likely exist out there. These hypothetical forms of life range from simple bacteria-like organisms to beings far more complex than humans. What is a scientific hypothesis?


The basic idea of a hypothesis is that there is no pre-determined outcome. For a hypothesis to be termed a scientific hypothesis, it has to be something that can be supported or refuted through carefully crafted experimentation or observation.


The primary trait of a hypothesis is that something can be tested and that those tests can be replicated. A hypothesis, which is often in the form of an if/then statement, is often examined by multiple scientists to ensure the integrity and veracity of the experiment. This process can take years, and in many cases hypotheses do not become theories as it is difficult to gather sufficient supporting evidence.


Hopefully this helps clarifies what a scientific hypotheses is and how scientist will be looking for extraterrestrial life. Which I would explain the ways we're looking for life beyond our own planet. 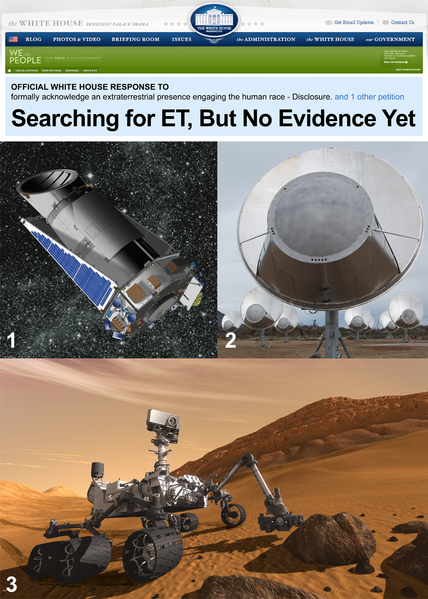 The official U.S. government position on extraterrestrial life, and the three major efforts in the search for it: 1. Looking for extrasolar planets 2. Listening for signals 3. Robotic exploration of the Solar System

As seen from the screen cap from the White House page we can see three main tools used in the search for the evidence of extraterrestrial life. 1. Kepler which is a space observatory launched by NASA to discover Earth-like planets orbiting other stars. 2. The Allen Telescope Array (ATA) to listen for signs of alien life and 3. the famous Mars rover which is a robotic rover used for exploration on Mars.


These are three main ways which we directly and indirectly search of alien life. Which still hasn't given us results that life does exit beyond our own planet.

As a person who does believe there is life out there. I feel that if we do find alien life there is a chance it would not mirror any form of life on our own planet. However, I could be wrong. As the news has reported many times that scientist have found similar planets to Earth. There is also a chance of planets and moons within our own Solar System either have some form of life and/or water. This allows scientist to believe that the building blocks for life on Earth can possibly be found on other planets. Which would, I think, cause alien species to have similar features (wings, hair, eyes, skeletons, etc) to animals here on Earth.

Hopefully my opening post easily explains the current scientific understand of extraterrestrial life and the tools we will use to find proof. There is a lot more I could have gone over. But I wanted to present this from more of a scientific perspective. Then conspiracy or anything else that doesn't include science. I hope you enjoy my thread and I inspire you to appreciate the life on our own planet and also inspire you to look for life elsewhere beyond our own.

There is also a chance of planets and moons within our own Solar System either have some form of life and/or water.

This allows scientist to believe that the building blocks for life on Earth can possibly be found on other planets. Which would, I think, cause alien species to have similar features (wings, hair, eyes, skeletons, etc) to animals here on Earth.

A very interesting thread and nicely put together ... S&F!

For now, I can only say that I think there may well be certain similarities as you mentioned above. But I have to think about that some more, there may be scenarios for the contrary as well. I'll certainly keep an eye on all follow-up posts and will be back with a more elaborate opinion later on ...

Thanks for posting this and keep up the good work!


Thanks for the reply. I appreciate that you like my thread. Yes, I could have done it better. But I'm glad someone enjoys my work. I'll try to find better information and videos. What I have now is good, but it could be much better.

posted on Apr, 20 2013 @ 06:48 PM
link
I will love this thread if it takes off,
I was in midst of reading this page,
We really have no clue as to what is out there. To me its obvious, disclosure is happening, it's as good
as happened and it goes against everything most of us were ever taught in school, my mind opened not long
after leaving school, and id say I believe one day we will be told that, life is in fact massively abundant throughout our universe.. I'm so glad I look at the world the way I do with an open-mind, for the masses to actually comprehend this enough to want to try and understand, we need some kind of contact, I foresee that happening in the not to distant future..


I like the way you think. But don't believe too much that you're disappointing when we quickly do not find evidence. I recall reading that even though there is a chance of life out there; the chance is very small that we'll find anything soon.

Out of the methods you mentioned, I think the research based on space observatories like Kepler are most likely to yield positive results. Further, I could imagine this happening pretty soon based on stellar classification and the analysis of planetary habitability. I think signatures of biochemistry produced by living organisms will sooner or later be found by analyzing the spectrum of light of a planet passing in front of its star.

Of course, this kind of detection is limited to what we know from our own habitable system since it's the only comparison we have right now:

Stability, luminosity, and lifespan are all factors in stellar habitability. We only know of one star that hosts life, and that is our own; a G-class star with an abundance of heavy elements and low variability in brightness. It is also unlike many stellar systems in that it only has one star in it (see Planetary habitability, under the binary systems section).

Working from these constraints and the problems of having an empirical sample set of only one, the range of stars that are predicted to be able to support life as we know it is limited by a few factors. Of the main-sequence star types, stars more massive than 1.5 times that of the Sun (spectral types O, B, and A) age too quickly for advanced life to develop (using Earth as a guideline). On the other extreme, dwarfs of less than half the mass of the Sun (spectral type M) are likely to tidally lock planets within their habitable zone, along with other problems (see Habitability of red dwarf systems)

All in all, I think that technological advances in this field will allow for launching far superior space observatories in increasingly shorter intervals, thus leading to a greater coverage/analysis of stellar systems including their planets.

Concerning the morphology of potential lifeforms we may encounter: I think it's very difficult to assume anything at this point in time. When comparing those worlds to our own habitable environment, then yes, they should have biological and functional features that are not so much different from ours (free movement will require some sort of legs/wings/fins, some sort of metabolism would be likely to develop etc.).

I actually tend to believe that - if we find such a world - we would probably discover more biological similarities than we would have thought ... but as said: we can only speculate about that due to a lack of other examples in which life actually evolved (and/or the lack of experimental ways to test such a hypothesis).