Underground Huarpa Culture City in Ayacucho(Peru). Below the ruins of a Wari Culture City 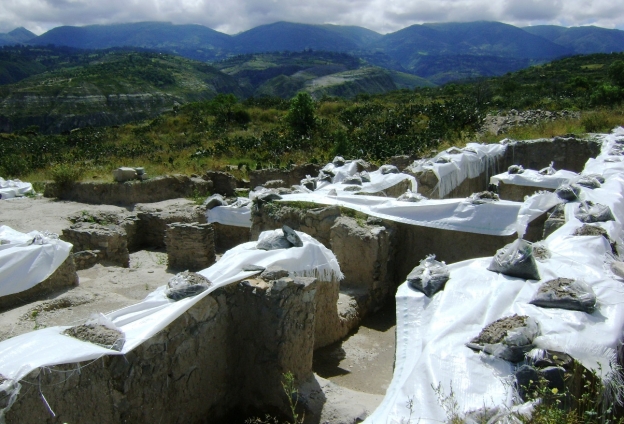 Under the capital city of the Wari Empire, it's been discovered an older city corresponding to another much older pre-columbiam culture, the Huarpa culture. The underground city discovery took place at the end of the last year. 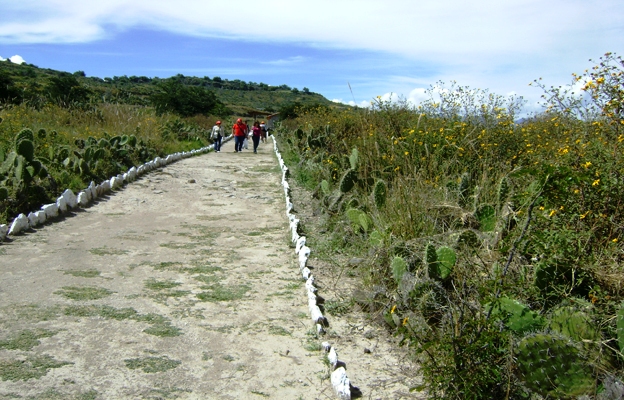 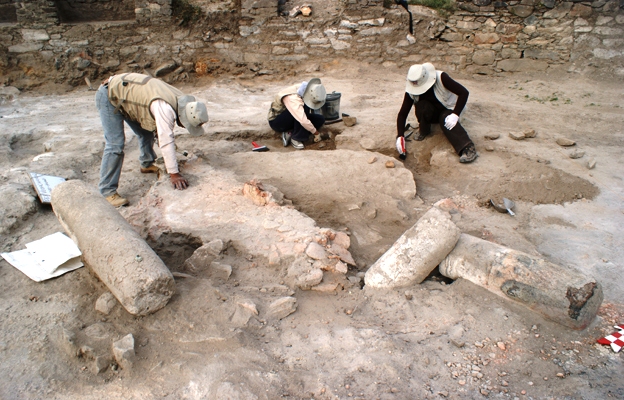 Research conducted in late 2012, by a team of archaeologists from the National University of San Cristobal de Guamanga led by José Ochatoma, Martha Cabrera and Carlos Mancilla, supported by 14 graduates and 20 students and 30 workers.

According Ochatoma, findings in the area called Vegachayuq Moqo revealed the existence of an ancient temple in the shape of letter "D". Before burned leave plenty of straw and reeds, finding "chonta" spearheads calcined as part of a ritual. Finally buried all construction and final retreated. 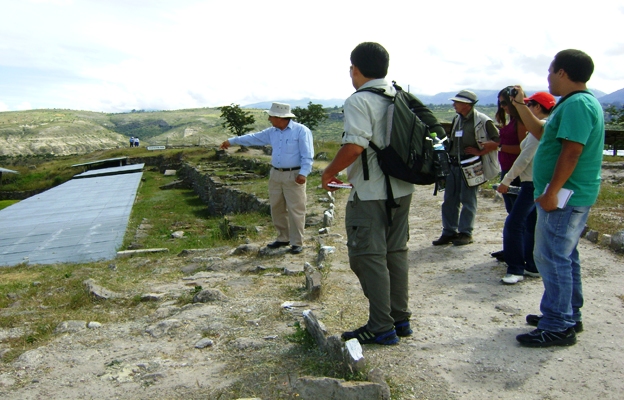 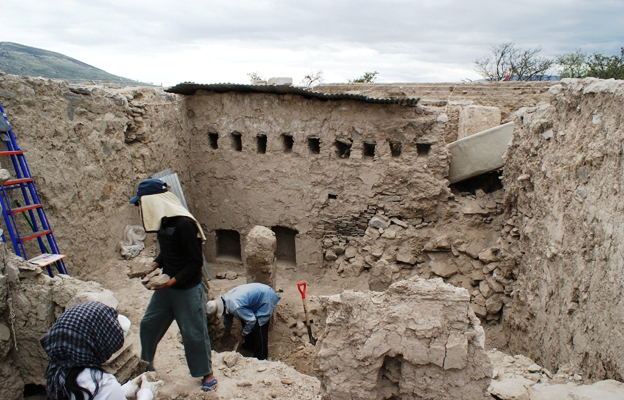 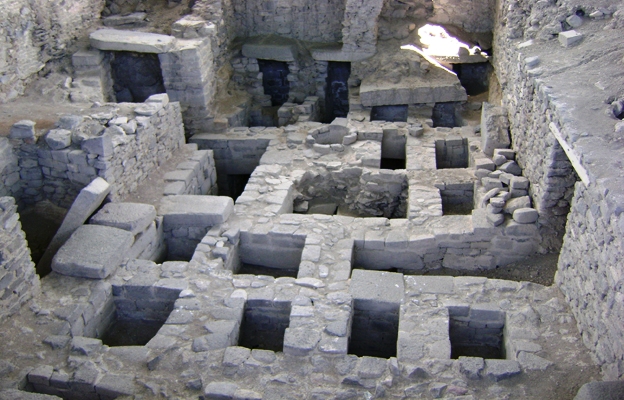 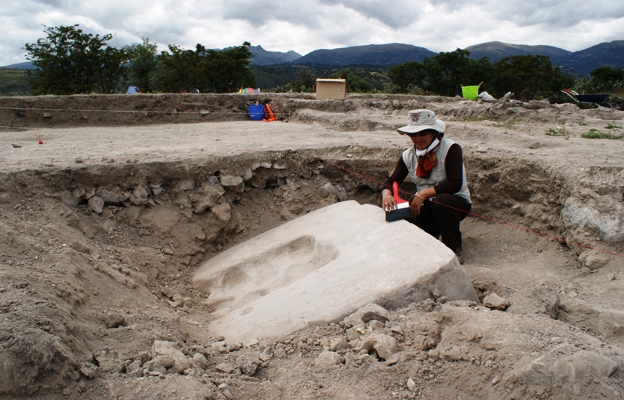 It's simply remarkable the fact that you can find mummies, a sort of "Intiwatana" and an astronomical observatory in the same site.

This temple also has 18 finely carved stone niches where, it seems, were the mummies (or mallquis) of their sovereign. In the central part of the enclosure stands a sundial which suggests that the site not only served as a ceremonial area, but also as an astronomical observatory. Below this Wari occupation were discovered remains of another building with plastered and painted walls corresponding to an older culture Huarpa call.

Please take your time to translate the rest of the info, I got to go for now.

posted on Apr, 20 2013 @ 12:14 PM
link
I was going to say that it show how repressive and domineering the Wari were on their empire ny building directly on top of a subjugated city.
But that is not the case Huarpa IS Wari.


Ayacucho basin setting north (and west) of the Titicaca altiplano area moderately high intermontaine valleys steep, scrubby land that needs terracing, plus canal irrigation in some places for consistent yields Origins in Huarpa culture an Early Intermediate Period culture, about 300 - 650 cal AD pottery style shows strong similarities to Nasca presumably some interaction, exchange, or other connection the highland culture (Huarpa and the Wari that followed) seems to have adopted some of the impressive Nasca pottery motifs and technology maybe these were useful to an emerging elite that needed to differentiate itself from common folks and legitimate its special status significant corporate (?) effort used to build terrace systems up to 100 terraces high with spring-fed and river-fed canals, small reservoirs, etc. canals up to several km long some relatively well built, with clay linings (?) and up to 1.6 m wide mostly relatively small villages plus Nawimpukyo, a larger town on a hilltop fancier "H" style fieldstone (not cut) masonry focussed on "several platforms" with some presumably administrative buildings, open courts, and high-status residences has its own small spring-fed canal system presumably the seat of a complex chiefdom that incorporated the immediate valley region Beginning of the Middle Horizon, traditionally dated 600 - 1000 cal AD Moseley emphasizes a long, severe drought shown in ice cores from 562-594 AD estimates precipitation down about 30% dust in cores suggests significant erosion presumed decline in agricultural productivity, maybe by a third Moseley describes the decline of Moche as a result we won't pursue that further here, for lack of time, but the reading is good Moseley's story for the origins of Wari Huarpa began to use high springs and river water sources, canals, and terraced mountain slope fields these were mostly unused at the time picking water out of sources high up gives you first claim over those using them downstream also increases total usable amount of water, due to less travel and loss by seepage and evaporation so Huarpa weathered the drought better than valley-bottom or coastal irrigating groups perhaps a related argument could be made for Tiwanaku's rise to prominence at the same time Huarpa developed into Wari, and the Wari "package" of ideology, technology, social organization for labor mobilization, iconography, etc. spread

So by controlling the flow of water higher up in the mountains, certain cultures got an advantage over others.


Brilliant conclusion, that's the kind of replies I like in my threads, thank you.

posted on Apr, 22 2013 @ 12:12 AM
link
Does it mean the city was built underground or the city is now underground because of it being covered in soil over the years?

Originally posted by catswithbigpaws
Does it mean the city was built underground or the city is now underground because of it being covered in soil over the years?

I think this part (same source) can answer your question :

According Ochatoma, findings in the area called Vegachayuq Moqo revealed the existence of an ancient temple in the shape of letter "D". Before burned leave plenty of straw and reeds, finding chonta spearheads calcined as part of a ritual. Finally buried all construction and final retreated.


Thanks for taking your time to read it