Some unexpected objects found in a lunar view.

posted on Apr, 20 2013 @ 02:57 AM
link
In other posts I have tried to show areas where there would appear to be structural formations on the lunar surface. Up to now I have found that most members do not accept the possibility and have written off the formations as just being rock formations. In a recent study I have conducted of an Apollo image there are objects showing on the surface with definite form, not a couple of objects, but many.

As the area selected includes the anomalous spacecraft shape could it possibly be that there is a story behind what can be observed? Could it possibly be that in ancient times people from another world landed on the lunar surface and adapted to the hostile conditions and started to construct a settlement using building materials they had brought with them? Could these ancient travellers have used parts of their spacecraft? To many this may appear impossible, but is it really?

There are places on this planet where an ancient civilization from another world may have landed. Shapes resembling spacecraft have been found. To name a few, a site high up in the Andes mountain range and more recently an interesting discovery of a circular shape underneath the Baltic off the coast of Sweden.

The image used for this research was AS15-P-9625. This is the low resolution version but the detail is reasonable enough to make a positive evaluation of the surface objects.

I ask that you form your own opinion of what can be observed in the animation. I am currently having problems posting a smaller image to the page as the new Photbucket addressing system will not show the image on the page. Have a look at the animation at the Direct link below. Are the shapes showing in the images used rock formations or something more interesting?


It looks very much like a weathered landscape. Possibly from a time that the Moon may have had some sort of atmosphere. I can definitely see what you mean about the appearance of potential civilisation though, the structures are laid out in a very specific pattern indeed.

posted on Apr, 20 2013 @ 07:00 AM
link
Unfortunately, the images of the needle ship have been so overcast with faked images and videos that almost zero credibility remains of the actual image that you present. It is a shame.

the attempts to debunk it also strongly illustrates the forces that are work by those that know damned well that they have to hide revealing data. We even can cast suspicion upon some of our supposedly "pro ET" folks.

After all, we are talking about a supposedly dead, and always dead, chunk of inert material that reveals little value in ordinary images. Eventually it might perhaps, as a unique military base and for its resources, but it should have little to be hidden than one would find about researching an earthly volcano. (This would also apply to the failure to release of complete imagine from Phobos if not other bodies in space.)

As for the needle ship, as I'll call it, A ship of that size, being a space ship, would be of incredible strength to protect itself moving across the solar system if not between stars. We cannot comprehend just how strong that ship and its basic materials may be. And for that reason, I'll mention something I don't think has been mentioned before in regard to that ship.

On the right end of the ship, the gash in the surface of the Moon seems to exactly match the shape of the nose of the ship. Is that mere happenstance, two unusual but matching features being in close proximity? I think not.

If we take those features as matching, we can assume that it is a disabled ship that has nosed into the surface of the Moon and as the back end sank into the lower portion of the crater, the nose was pulled out of the gash it had made. Since it is in plain sight to human eyes (via our instruments), that reinforces that it was an crash-landing and should not be found in that exposed position.

Off-hand, I would guess that it is the original mothership for the ETs that live within our system. Perhaps it is our mothership if we were bio-engineered from basic earthly stock. Of the planets, Earth would have been about the best place for them to play God.

Originally posted by DPrice
It's just some rocks. It's always just rocks.

Since the dawn of BBS boards people have been creaming themselves over supposed objects in NASA photos. How many of those have turned out to be something other than rocks or bits of earth craft? In your own time.


Why don't you use the full resolution images available? That would show things better.

The image used for this research was AS15-P-9625. This is the low resolution version but the detail is reasonable enough to make a positive evaluation of the surface objects.


I have some doubts as to what you're saying in the quote above, unless you refer to surface objects as being natural formations.

However, I always enjoy reading your posts. You seem to give your arguments a lot of thought and are relentlessly searching for unusual features, which I think is remarkable. Also, your descriptions are usually quite comprehensive and broad. Yet, I tend to not see what you see ... is it because you want us to discover something on those images?

I, for one, would appreciate if you highlighted some of the things you find interesting ... otherwise I feel rather lost in the vast lunar landscape!

P.S.: I zoomed in on your reference image and everything looked quite "normal" ...


Since the dawn of BBS boards people have been creaming themselves over supposed objects in NASA photos. How many of those have turned out to be something other than rocks or bits of earth craft? In your own time.


We only know that those are "bits of earth craft" because NASA told us;for me those bits look like rocks too!


Since the dawn of BBS boards people have been creaming themselves over supposed objects in NASA photos. How many of those have turned out to be something other than rocks or bits of earth craft? In your own time.

Some people see rocks because they are told to see rocks.
Tell me of any government you can trust or believe Wars, UFOs, enemies, state of the union (Jack), etc..
Being a UFO abductee from decades ago, I'm quite used to seeing through the smoke. It is refreshing air that I find. 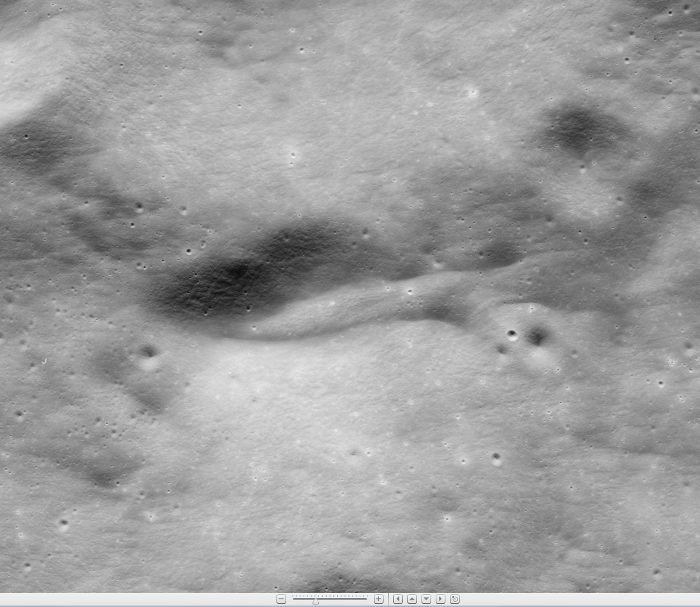 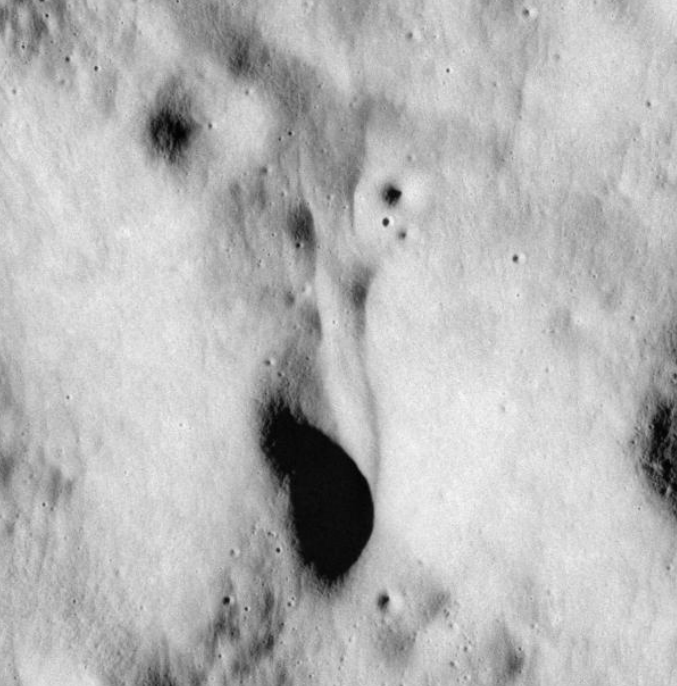 The links go to the high resolution pics that you can zoom and pan.

You can also look at the area with the LROC now as it was mapped by it. Here is a thread I did about it:

LROC Images Of The Apollo 20 Hoax

It's not a "needle space ship". It's a hill with trenches on either side of it just on the side of a crater.


Well here we go again another vague reference to structures why do you cut an area from the high res image use your so called enhancement of the image and then save as a png or jpeg uder 500k and up load to ATS.

The LRO image you linked to can be zoomed in to see VERY small surface details and craters so select an area say below the so called spaceship and let see what you come up with.

Most people on here that DON'T believe what you think you see don't just see rocks as has been claimed no what we see are rocks, craters and the terrain being brought into view NOT structures.

Here why don't I save you the trouble!!! 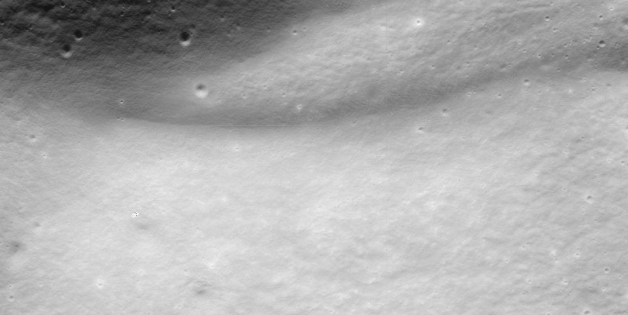 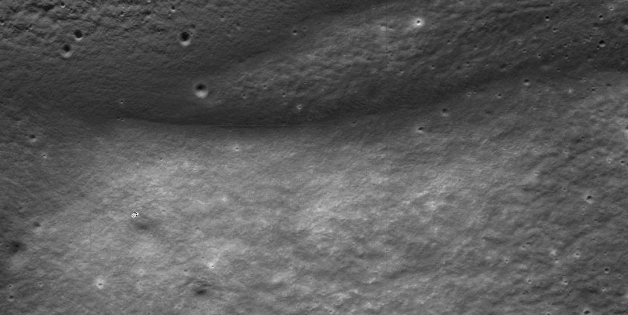 The same pic after I reduced the highlights and slightly increased shadows and increased the contrast using a simple free image viewer and took all of 10 seconds to do.

Now I can see surface undulations in the terrain which are washed out in the first image are they structures NO they are surface lumps and bumps, it's just that I don't BUTCHER images the way you do!!!

posted on Apr, 22 2013 @ 02:33 AM
link
I would ask members to accept my apologies for not replying sooner but I am having some real problems loading the ATS pages. It's just luck that I am able to make this post. I will post an image, if I am not blocked from doing so, of what I can see in the image.

To ArMaP, Yes I will prepare a high resolution image of the same area. Did you notice in the animation what the lighter areas in the original are concealing?


No, I haven't see anything concealed, and if there was something "concealed" in the image nobody could "unconcealed" them, things don't work that way.


go for it. looks interesting if nothing else.

edit on 28-4-2013 by arianna because: Photobucket's image address did not work

posted on Apr, 28 2013 @ 03:01 PM
link
This is another story that has been run slap over by those who shout it down as a hoax and leave most in fear of daring to look any further.

The so-called 'needle ship' is a factual feature of the lunar surface. There was a story a few years back of a secret Apollo 20 mission to explore this site. It is very incredible and does indeed strain credulity factors. But the 'hoax' crowd is really no more convincing than those who say it's the real deal.

Depending on your level of courage and conviction, you might simply call it 'interesting' and leave it there until something else comes along.
edit on 28-4-2013 by redoubt because: typo