What can we ban to prevent another Boston

posted on Apr, 19 2013 @ 08:09 AM
link
Im curious what laws or bans will prevent future attacks such as Bostons. This is not about guns this is about stopping determined criminals from committing future atrocities. Please dont confuse the two. Also is anyone a little pissed ,considering the vast amounts of money,loss of privacy,HLS,CIA,DOJ,FBI, Patriot act, National Defense act so on and so forth.I am.

posted on Apr, 19 2013 @ 08:13 AM
link
Here is pragmatic an non-violent approach to reducing the number of Jihad attacks on American soil:

Originally posted by skorpius
reply to post by Camperguy


Don't be weak and foolish. We can take proactive pragmatic steps to reduce the number of muslims on American soil thus reducing the amount of Jihad we have to suffer.

We need less Islam not more, less muslims not more.

or well, we can tighten our immigration policies, screen those wanting to come in more...

but then, some seem convinced that these attacks have a little gov't involvement with them...
so we might have to ban the gov't also.

Was Timothy McVeigh a Muslim?

Maybe you should address the question in the OP. This is not about people who claim adherence to any specific religion, it's about people who for their own twisted ideals -- whatever they damned well are -- commit atrocities against others.

My answer: banning access to various materials has never worked and it never will. People who want to do evil will invent new ways if they need to.

posted on Apr, 19 2013 @ 08:18 AM
link
Haha, Good one Mike. If there weren't Muslims on this earth, God would destroy it. The only reason he created it was so human beings could come together in worship. Only Allah is worthy of worship. And you want to ban Islam from being taught? Your only hesitating for your own destruction. I'm not saying that Muslims would be angry against you or come towards you in violence, but It's like having a war with God. It's a war you'll never win, You're seeking a war with the one who created you and gave you life? What a fool of a human you are.

Islam has done nothing but good for America, whatever Islam prohibits is bad for every human being and whatever it allows is the best of deeds among humans. Tell me some of the things that Islam has done to America that has been bad. Don't tell me about the deed of bad Muslims, tell me about Islam. What has Islam taught that was so bad for you?

Originally posted by Camperguy
...This is not about guns this is about stopping determined criminals from committing future atrocities....

No. The Boston Jihad Attack was not about "determined criminals" it was about devout muslim jihadis committed to the ascendancy of Islam across all the planet through the use of the mechanical process of Jihad.

posted on Apr, 19 2013 @ 08:20 AM
link
These types of events can't be stopped, especially if they were conceived in America. The national para military force known as DHS, FBI, CIA, whatever you want to call them, are not here to protect you, they are here to control you. You can't ban and enact laws to try and regulate every random occurrence that happens, that's why we're losing freedoms at break neck speeds already.

All of that security, all of those billions spent, and they couldn't stop 2 bombs from exploding. Bombs that were created with crude methods.. Whatever the reason was behind this bombing, it won't matter, because the gov has a better reason.

posted on Apr, 19 2013 @ 08:20 AM
link
The only way to keep an event like this form happening is to ban humans from the earth. As long as there are people, there will be some willing to commit such acts. 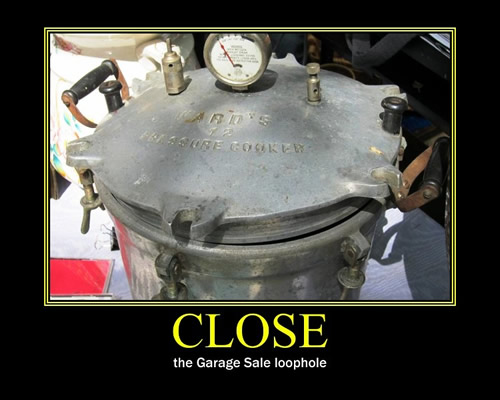 Originally posted by mike_trivisonno
Here is pragmatic an non-violent approach to reducing the number of Jihad attacks on American soil:

Seriously? Here's a non-violent approach - stop sticking your nose in their business. You have been in the middle east for decades promoting 'democracy' when they didn't ask for it. Now when two guys come to your soil you want to ban them all?

And don't bother with any 'Muslim Sympathy' argument - it is pretty lame.

What has Islam taught that was so bad for you?

The jihadis responsible for carrying out the Jihad Attack on the Boston Marathon were muslims from Chechnya, home of some of the most brutal and inhuman muslims the planet has ever seen. Chechnya is home to the Beslan School Jihad attack that slaughtered many many innocent children on the altar of Allah.

The only way to prevent further attacks is to stop being a free society.

Do a search on "Beslan" and behold the flower of Islam.


And man is that a mean looking cooker! Looks like militant home food processing equipment there.