The sun has been ridiculously bright lately!

posted on Apr, 18 2013 @ 01:46 PM
link
I was taking a walk earlier, just before 2 PM. I'm usually fine wearing sunshades, but this time I was squinting, and for a split second I actually wondered if the lenses were missing.

The rays are also hot, too. The air outside is comfortable, even cool when the clouds were out, but the second the clouds moved away and the light hit me, it felt like the sun had parked itself right on top of my head. The subsequent body heat increase is welcome during walks on cold days, but not now. If I were only allowed to take walks past sunset!

Beautiful red sunsets are also unknown in my area. It's nothing but blue-white gradating directly to black. The only red sunsets I can see are in photographs. I wonder why we don't get any over here?


I could be wrong but many call this Spring.

And it does seem to be a nice one so far.

posted on Apr, 18 2013 @ 01:52 PM
link
*facepalm*
You'd think I was born yesterday.
Maybe I should have also mentioned that the sun seems to have been this way over the past several years straight.


I've been saying the sun has been changing for years and now its actually being confirmed in science. When you were a kid the sun was orange, now its almost pure white during mid day. You can't even look at it for a split second without wincing. Basically the Sun is changing, it's getting hotter and closer. Were in for some real crazy times ahead. I've heard numerous theories about why and what were doing to combat the fact its getting hotter which has a deadly effect on the planet like Chemtrails trying to deflect some of the rays.

No matter what you believe it's undeniable that the sun is changing and will make the human race make drastic changes in order to survive.

posted on Apr, 18 2013 @ 01:56 PM
link
i always keep asking myself, maybe the ultimate lie by nasa is "i wonder if the sun is going to be super nova sooner than expected" but just an opinion of course

posted on Apr, 18 2013 @ 01:58 PM
link
It's been said that the sun is virtually ignored in terms of the global warming debate. It's like it's seen as the paragon of stability, with the only possible changes being the slow increase in size over the next 4 billion years, and the 11-year flare cycle.

posted on Apr, 18 2013 @ 02:03 PM
link
reply to post by EllaMarina
I would be so happy just to see the sun today! It has been overcast and cloudy for a few days now; big storms supposed to be moving in by this evening. I hope it clears up for the weekend!


Just from a logic standpoint, have you considered the possibility that it is you (and presumably others) that are changing?

I guess opening a discussion of physics would be a waste of electrons but to be plausible, you're going to have to get to the physics of what you are proposing.

For instance, if the Sun were closer, then the Earth year would be getting shorter.

Originally posted by jude11
reply to post by EllaMarina


I could be wrong but many call this Spring.

The prairie provinces haven't been informed yet.
The biggest brightness problem here, is the sun still glaring off the snow....

posted on Apr, 18 2013 @ 02:12 PM
link
I have considered that it is just my own eyes and comfort level that changed over the years. I began wearing sunshades outside due to a medical condition, even on overcast days. I also don't go out much.

Then again, the anecdote that the sun is too bright has been presented even by people who have been outdoors for most of their lives. And there's also the scientific evidence aspect. So maybe the sun is changing, and I happen to feel it more worse than most other people.

(Now, how to make my sunshades darker...)


I've noticed it.. There have been many threads on this, not sure I can find them with the search.. It's not only the brightness that is different, but the heat part.. I feel like it's actually cooking me now, like I have to hide from it..

I do think chemtrails are related. I also think underground bunkers are for the same purpose.. Along with the sead vaults I can only think one thing.

I wonder about the "age of enlightenment" many have talked about.. How literal could it be? I think about the cloud of energy in space we have started moving into as a solar system and I wonder the dynamics between this and the sun..

I think about the annunaki putting gold in the atmosphere to save themselves and I think back to chemtrails..

I think about all the missing trillions and I get why they don't care..

Makes me think the NWO isn't an evil conspiracy to kill billions, but maybe it's a conspiracy to continue government once the Sun gets back to a more normal state.. When some stones say maintain 500,000,000 I think it means merely maintain, not get to from above, but get to from below...

All random thoughts I have that probably don't have any basis in fact, but I still wonder..

I said a lot there for a topic about noticing the sun's bright... Oops.. But yes I have noticed for awhile and I think it's one reason the sky never seems the right color blue to me anymore..
Or maybe I have looked at computer screens to much..
edit on 4/18/2013 by Dustytoad because: (no reason given)

posted on Apr, 18 2013 @ 02:18 PM
link
okay im trying again i keep timing out errr. joined to comment been lurking for years but as the name says thetimewasright when I was little the hottest time of day was 11-2 an now its 2-5.. (I'm 30) But this weekend I was out an it was only 60 degrees out but myself hubby and both our girls got sun burned


The sun looks a lot brighter to me as well it just looks more white
than the yellow tint i remember when i was a kid. 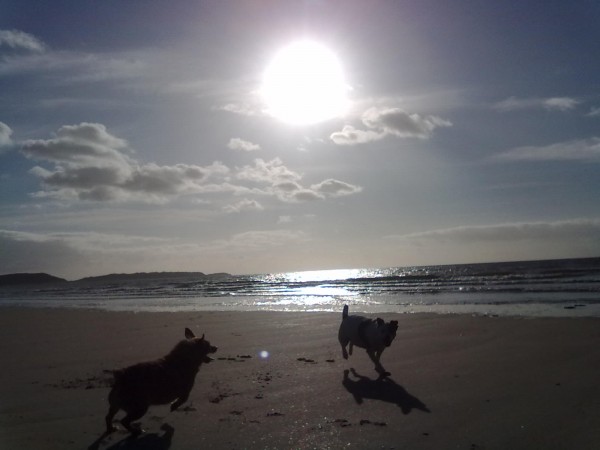 I always thought a white looking sun was more of a winter thing not summer
so maybe it's got something to do with the upper atmosphere being cooler.

the pic above was taken at the end of last summer about august i think.
edit on 18/4/2013 by skuly because: adding bits

Originally posted by EllaMarina
I was taking a walk earlier, just before 2 PM. I'm usually fine wearing sunshades, but this time I was squinting, and for a split second I actually wondered if the lenses were missing.

The rays are also hot, too. The air outside is comfortable, even cool when the clouds were out, but the second the clouds moved away and the light hit me, it felt like the sun had parked itself right on top of my head. The subsequent body heat increase is welcome during walks on cold days, but not now. If I were only allowed to take walks past sunset!

Beautiful red sunsets are also unknown in my area. It's nothing but blue-white gradating directly to black. The only red sunsets I can see are in photographs. I wonder why we don't get any over here?

So, have you determined that there actually is an increase in luminosity, or is it simply a matter of, "it seems brighter?" All the measurements I have seen seem to show that luminosity is steady at 3.846x10^26 joules per second. And the reason why you don't see red sunspots like in the photos is that sunspots are almost always photographed using a hydrogen-alpha filter, which admits light at 656 nanometers, which is red.

posted on Apr, 18 2013 @ 02:45 PM
link
These threads claiming the sun to be brighter is poping up everytime at springtime here on ATS, and also the threads saying "I think the sun is getting hotter as my skins burn in the sun".

My theori is that people have seen the grey and dull weather for 6 months, staying indoor most of the time while watching TV and computer screens.

And the first time they get out in the spring sun, it hurts their eyes.

I don't see any change to the sun at all, and i work outside all year around, seems very normal for the time of the year.

Enjoy the collors comming back, best time of year

I call it natural. If the sun stayed the same brightness and never changed, I think that would be unnatural.


The earth is not getting closer to the sun. On a clear day you may feel the sun is getting brighter or the ozone where you live is depleted. However with all this said we are getting closer to the solar maximum, the sun spots are at an all time high. Which means more radiation and higher temperatures for the earth, so maybe you are really sensitive. Reduced sun activity caused a mini ice age in the 17th century
en.wikipedia.org...

posted on Dec, 2 2014 @ 11:25 AM
link
The sun emits what is known as 'black body radiation' - meaning that it emits a range of wavelengths of radiation based upon its own [surface] temperature. And in case you haven't noticed, the sun not only looks much *BRIGHTER* than it used to, but its apparent color has even changed.

The sun always used to look yellow, but nowadays, it looks *WHITE* [with still a hint of yellow, perhaps, but far whiter and far brighter than it ever looked before]. This is something that anyone with eyes and memory can confirm for themselves, as opposed to NASA data, which can be [and almost undoubtedly is] grossly falsified by the time it reaches the public [since NASA is little more than the public space arm of the CIA, whose satellites it is their main job to loft into space].

The sun *SEEMS* brighter, and the fact that it also appears *WHITER* confirms this simple observation, since that's what one would expect of a black body that increases in temperature.

But you needn't worry about this warming of the sun or the consequent warming of the Earth - it's all part of the plan. The Earth is currently undergoing a process known as 'Ascension' back into the higher vibrational realms of existence, and Sol, our sun [which is _NOT_ a dumb ball of gas as we have been taught, but rather an intelligent, spiritual *BEING*] is helping us with the transition by providing us with the additional energy we need to make this jump.

So in the words of Douglas Adams, "Don't Panic!". Everything is going according to plan, it's all going to be OK, and nothing [not even chemtrails, the Powers-That-Be's attempt to keep us all 'in the Dark'] can prevent the *BRIGHT* future that is now upon us.

posted on Dec, 2 2014 @ 11:55 AM
link
I moved from the southern half of the country (FL) to the northern part of it (MI) The sun looks the same from both places, so there's nothing drastic going on atmospherically to explain away any perceived weirdness in either region. People who spend a whole lot less time outside tend to think the luminosity of the sun is different compared to those of us used to spending time outside. The only thing that's changed for me outside is the vegetation & about a 40 degree temperature difference, and that's just because I moved.

Riiiiiight. Can I have some of whatever you partake in to believe that?
edit on 12/2/2014 by Nyiah because: (no reason given)