Did a Missile Cause the Texas Explosion? ['Flash' Before Explosion]


Can you take a screenshot?

Originally posted by Chadwickus
reply to post by Wonderer2012


Can you take a screenshot? 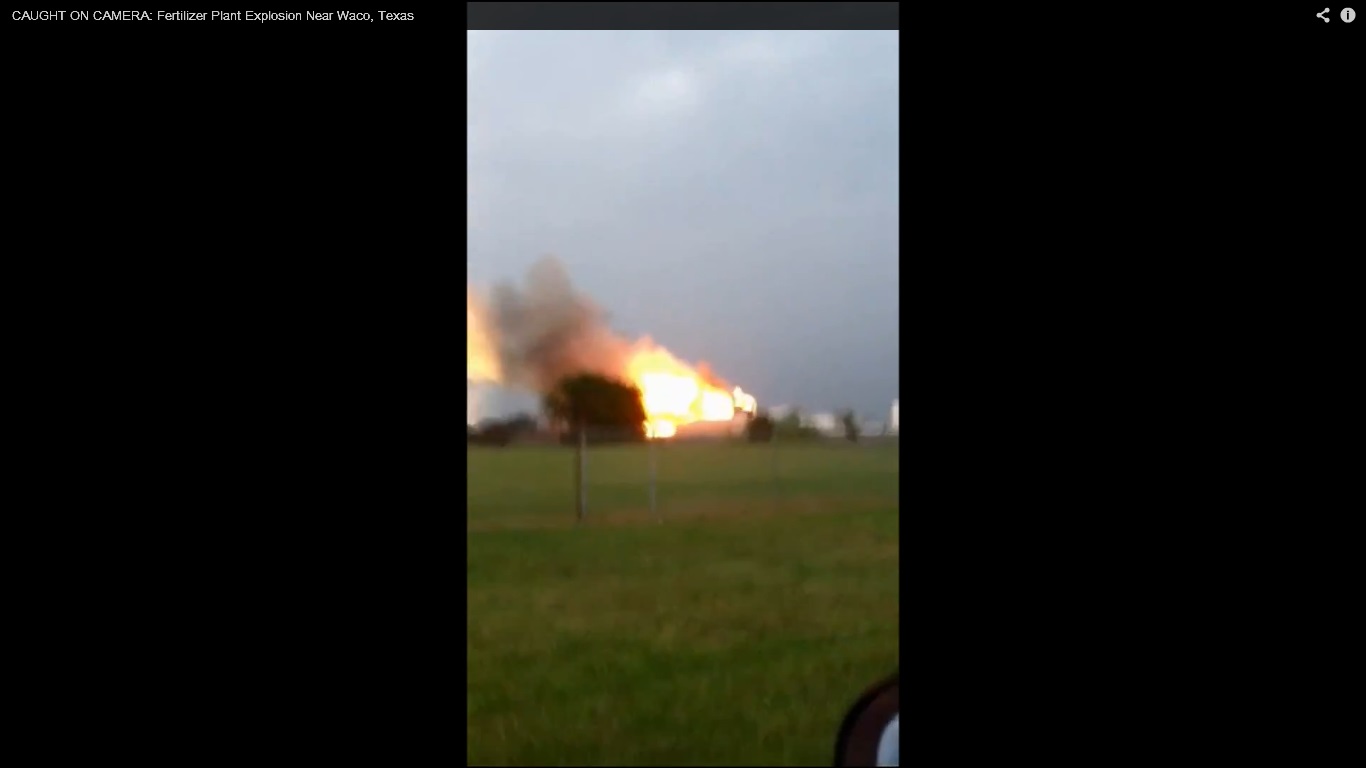 That 'flash' is observed just before the whole thing blows up.

Good eye.....this needs investigating but I wonder why eyewitnesses didnt see it. There is a rather large hurdle to climb tho since you had a fire in a fertilizer plant as the probable cause of the explosion.

posted on Apr, 18 2013 @ 09:32 AM
link
Let me break this down for as an operation and see what is more likely. When questioning things you should ask yourself why (not used on ATS nearly enough)

Why fire a missle at the plant that is on fire

Scenario 1. You are a terrorist, you have just planted a bomb and damaged a plant. Everyone responds and video is recording. You dont see the distruction you planned so you fire a RPG/missle at it instead of getting away and trying your luck on another target.

Scenario 2. The plant has a malfunction and has a fire. You just have an RPG/ missle laying around in the back room. In an attempt to help put it out/ or blow it up you fire your RPG/ missle at it

Scenario 3. You are the evil US government. You sent in the seals to blow up this no name plant in the middle of nowhere. Bubba did a bad job at explosive placement and only caused a fire. You send in the cruise missle to finish off this plant, even though it would be more productive to just start with the missle and leave less witnesses/ chance of getting caught (granted this was a magical cruise missle since it didnt leave a smoking crater)

Im not saying that this isnt sabotage, as there is no way for me to know. I can say that a missle/ RPG was not fired at it just by asking why

BTW smoke burns when mixed with chemicals and air. Thats why you get backdrafts and flashovers in house fires. Something ignited the smoke (heat ember etc) and it burned back to escaping gas
edit on 18-4-2013 by cavscout11cav because: (no reason given)

posted on Apr, 18 2013 @ 09:33 AM
link
if you watch the video i posted on the first page at the 1:25 mark, you will see that just before the tank blew there was a flash. the flame grows.
this is the point at which the metal spilts and the vapors and the liquid ignite and the fire ball starts.

the flash you see in the op video is the same thing.

light travels faster than sound,therefore you'd see the boom before you hear the boom


That is the most likely answer, that the smoke ignited in the air and this then travelled back to the main fire, I was merely pointing out there is a flash that travels into the fire that causes the explosion. Athough, we do not actually know what happened.

I mean surely the people running this plant would know the dangers and how to deal with a fire- regulations in place etc and emergency services would know what to do.

If it wasn't possible to plant a bomb, then why is the idea that something was fired into the fire so out of possibility? I'm not saying this happened but many things are carried out that do not make sense- such as spending millions of tax payers dollars to arm foreign killers to cause chaos in Syria or Libya.

You are seeing the flash of the explosion before you hear or see the flames it produces.

I think this was a matter of a person filming just the fire out of curiosity, I don't think they were aware that it was going to explode, they just managed to be the unlucky camera crew at the time.

Originally posted by micmerci
MSM is now reporting that the explosion is categorized as suspicious. It may be criminal in nature.


I think this was a matter of a person filming just the fire out of curiosity, I don't think they were aware that it was going to explode, they just managed to be the unlucky camera crew at the time.

I would agree there, most people would tend to start filming something like this for the reasons you mentioned, nothing suspicious about that.

I am thinking that whenever a drill is announced, it is time for one to leave the area of the drill as soon as possible.
Too many previous emergency response drills 'gone wrong' come to mind.

Originally posted by CarbonBase
Did not see any indications that there was a missile from the video. You should google video from the Henderson Nevada explosion of the plant that was making solid propellant for the space shuttle program. It's pretty AWESOME! The 'secondary' explosion in the video is probably just the fertilizer that was ready for shipment.

Wow that was insane, thanks for the tips.

Here is the video I found:

Originally posted by ga-`tv-gi
Um........ I dont think so. Not every explosion is the US gooberment at work.

Right, had they been at work doing their jobs, all of those regulations would have been "working properly" and this would have never happened.


I believe that the flash comes from the explosion starting behind the smoke and propagating rapidly forward. If it really were a rocke, it had to come in from the other side.

Sonic boom before hand?
Now that doesn't sound so much like a pre-explosion.

Is it just me, or does it seem like there are a lot more dismissive, rude replies lately?

I would like to thank the OP for posting this. Even if there is nothing to it, bothering to
slow the video down to check for anomalies is just the kind of fact checking the needs to be done.

posted on Apr, 18 2013 @ 01:39 PM
link
it looks like it could have been a drone strike?
i've heard too many stories in the past from different news stories about explosions in suburban homes and how they were possibly related to a drone strike. such as eyewitnesses seeing a flash of light and also sonic boom beforehand..
theextinctionprotocol.wordpress.com...


only reason something like this can happen?....practice drill to see the response of a real attack on american soil? over 100 people were injured. i'd say that it would be a drill done perfectly. especially after seeing that their were supposed to be new ems systems being set up around that area before the fire and explosions.

so again.. I agree too that it could have possibly been a drone strike or some type of missile strike.


I noticed it last night while trying to see if something hit the car - it sounds like the car skids across the road from the shock wave.