The charles hall who is tells the story of his interaction with the tall white aliens at area51 in the 1960s will be visiting/speaking in my city Australia adelaide 20 th april.

You reckon the photo of the tall white female is real?
What about his story, is there any proof for these tall white aleins, apart from the charles hall source?
edit on 17-4-2013 by AthlonSavage because: (no reason given)


I'm assured that the motive of the individual is money and his premise is false. The photo appears to have been created with 3D graphics software or a real image that has been altered with image software. 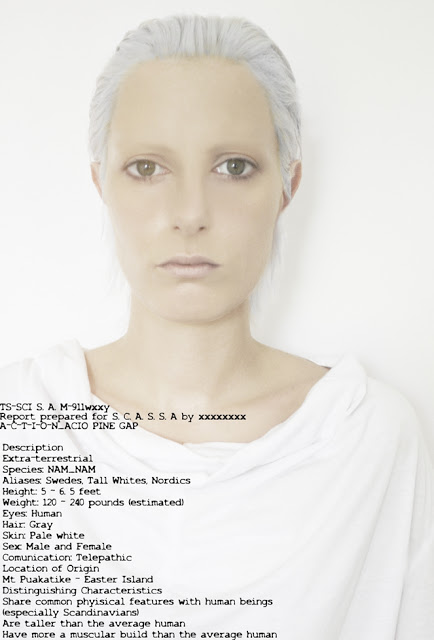 this is a real one.

not a bad show I thought too defiance.


I can't prove it, of course--but I would bet perfectly legit(!) Federal Reserve Notes that that photo is (not-so-)subtly embellished. I've done this kind of work myself, and I can see a couple of amateurish touches.

From simply viewing this picture I am emphatically not interested in any story associated with it....

Edit: I awarded you a star and flag anyway, because I'm still interested in hearing others' opinions. (I'm not always right, never mind what I tell my wife.) I might also mention that I have seen 2 rather remarkable UFOs myself and have no doubt that we have ET visitors. But sometimes the stories you hear on book tours are (like the lady in the photo) just a little too pat and perfect.
edit on 4/18/2013 by Ex_CT2 because: (no reason given)


Tall white aliens dont have teeth so she cant be one.

Elisabeth Klarer was a South African woman who claims to have married and mothered a child with Akon, a Nordic-looking alien, as she described in her book Beyond the Light Barrier (1980).
At the time Klarer became celebrated by the international UFO community in the 1970s one could still be very creative in alien descriptions.
So it's interesting that she also described a race of aliens who look very much like Nordic white people.

An image of Akon is in the link:
goldenageofgaia.com...

More on Klarer, the first woman who claimed to have sexual relationships with an alien (I guess that was legal under apartheid if the alien was white): en.wikipedia.org...
edit on 18-4-2013 by halfoldman because: (no reason given)


Considering the supposed features of some of these Alien races, many of which were 'discovered' in the ufo craze back during this time period, i am really not impressed by the picture.

I guess it's not so obvious to men who don't wear make up, but she clearly is wearing make up.


Of course the photo is real, that's my missus


I imagine the picture is an artistic impression, Charles Hall hasn't got any pictures of the Tall Whites. When he is asked what they look like he shows a picture of his wife on their wedding day, I take that to mean they look like us. I can't see how anyone can know if his story is true or not unless they worked in that restricted area back in those days.

Another guy who gets a hard time here is Bob Dean, he also claims to have met Aliens who look like us. At the end of one of his more recent talks he claims there are a couple of people in his audience who were not born on this planet.
We all have to decide for ourselves if we believe them or not.


You reckon the photo of the tall white female is real?
What about his story, is there any proof for these tall white aleins, apart from the charles hall source?

It reminds me of the incident where Two young, tall, blond, attractive, Swedish twin sisters got into a bit of trouble on a highway, one being hit by a truck. Cant find the videos and seem to be missing. This is the only info I can find on the incident. deeppoliticsforum.com... Culture shock?

I cant determine if this "Photo" is real or not, I can only try to keep an open mind. But if real, well then, it might explain a few things from the past.

The "photo" depicts someone who appears not to be too happy about having her picture taken. But what female really does? If she is really what is portrayed then I would have to bestow great credit on her, if she is representing herself in a truthful and honest light, and, she represents a honest effort of "Friendship".
Again, if the story is true, they must have great apprehension about making a full and public appearance. The backlash could cause global events that could spiral out of control, and become a unintended consequence. There must be reason, rational reason why they choose to contact us after such a long period of suppression. Their choice of "First" "ambassador" , being a attractive female is something to be concerned with. Our instincts as a species would always favor the attractiveness of the unknown, over the perceived threat of it. Reminds me of a Coyote choosing not to attack a female domestic dog, but only when she is in heat.

There are moral issues that must be considered. The first I suppose is the idea that "They" are our owners, our biblical creators. This may absolutely be true, in the past, and with the first human beings they bore. But those first human beings are long gone, and I don't see how ownership could follow after such a long period of abandonment. In essence, they have lost all rights of ownership or responsibility for us. We, as a species, have paid our dues, we have matured, and we must take responsibility for our own individual actions, and inaction's. As they must as well.

Another moral issue is where they come from and who it ultimately belongs to. It is similar to the idea that a mans home is his castle. He has the ultimate authority who enters his domain, and who does not. It used to be a steadfast principal here in the US but has declined over the years due to an assault by covert forces. I believe they have guarded the location and nature of their domain to such a degree that it now puts the whole of the world at risk. No secret whether it be big or small, short or tall, is worth "At all costs". For in the end, it will cost all of us, everything. Are they here now, trying to defuse this situation? It appears so.

In a compressed video Billy Joel puts to song what your Collective Secret has done to humanity, and show what price we have paid, for it.

No, we are not responsible for starting the fire, we have only had to try and live with it, and put it out. But on the other hand, all of "you" are not responsible for what your forefathers did either. By observing the covert assistance you have provided, maybe all of us working together can finally put the fire out, for good. I have seen into the hearts of your "position", I have seen the reasons, the threats, the ignorance, the compassion, pain and suffering. For even your "Souls" have been played for fools. It also may be true that you live a extended life span and in no way can I challenge the knowledge you may posses, but, on the other hand, wisdom, true wisdom, is ageless, and recognizes no boundary's.

You are a lost part of all of our beings, its time for a homecoming, a family reunion of immense proportions

The following song contains the spirit, the "Soul", of our combined presence. It must come to pass for our continued existence.

"The Family, is the Solution"

Originally posted by lee anoma
That's a human female.
That is not an 'alien'.
This is a hoax.

I dig your avatar


The picture looks like the typical beautiful human woman. I have to say that the female Alien I met on Sedona Oak Creek could only be described as "Beautiful" afterwards by both my friend and I. What we see as beautiful and what other races of living entities see as beautiful can be worlds apart, literally.

Genetics are such a beautiful thing whether here or other planets. All Genetics.

If what we judge as ugly, or grotesque are ever seen by the public, then will they be automatically judged to be malevolent? If they are covered in mucous and have bulging eyes in places unnatural to us, will they be seen as benevolent?

Humanity must first learn to accept one another before the veil of other worlds/dimensions can be lifted.


The picture in question here from the OP, made me think instantly of the female in the new series Defiant, the sensuous wife of the leader that looks benevolent as all get out, but she was not so benevolent when plotting the demise of the miner guy to take control of the mines. Also when she averts the children's attention away from her husband breaking the fathers hands for being late on a payment.


There is a link to the documentary about the Swedish twins on the Roseanne MKultra thread.


David Bowie would first need a lifestyle lift then this other work. His hair should be as naturally white as that by now though so we wont have to bother with the bleach. Seriously though we might have morphed David Bowie into this chick 30 years ago but not today.

www.bing.com... I really wish I knew how to post photos right in this box but I have not learned how.