Somebody out there is sure getting prepared for something really big. We have just witnessed a takedown of gold and silver unlike anything that we have witnessed in decades. On Monday, the price of gold had fallen by more than 10 percent at one point. It shocked investors all over the globe, and overall what we have just seen was the largest two day decline in the price of gold in 30 years.

The price of silver dropped even more rapidly on Monday. It was down more than 14 percent at one point. There was an atmosphere of "panic selling" as investors and financial institutions raced to liquidate their holdings of silver and gold. But was this exactly what someone out there wanted? As I wrote about the other day, big banks and news outlets all over the world have been boldly proclaiming for weeks that gold is entering a "bear market" and that now is the time for all of us to sell our gold.

In particular, Goldman Sachs reportedly told their clients earlier this month that they "recommend initiating a short COMEX gold position". Was that just a "good guess" on their part, or was something else going on? Were they actually trying to help create a "selling frenzy" that would drive the price of gold much lower? What we witnessed on Monday was absolutely jaw-dropping.

Just check out this chart of the price of gold over the past 10 years. The takedown of gold on Monday sticks out like a sore thumb... 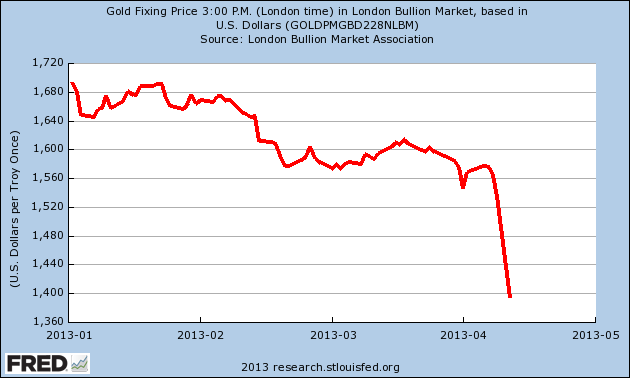 I agree, it seems like the sudden crash of gold & silver is about to benefit someone. Most likely the rich?
Causing everyone to panic sell cheap is genius really if you want to cash in off the back of it.

posted on Apr, 17 2013 @ 09:01 AM
link
It's quite interesting that not only did gold and silver take a major hit but the dollar slid south as well. On Monday the dollar was at 6.23 CNY and now it is 6.17 CNY along with a decline against the euro. This was no fluke, someone pulled the plug on gold and silver and with Goldman Sachs calling for a short I doubt that it was a lucky guess. The financial institutions at the top know in advance what's coming down, everyone else is left in the dark.

Goldman Sachs took one for the team in 2008 and of course made a full recovery. By doing so a bunch of small fry got eaten up. With the drop in gold and silver, once again the small fry are being feasted on.

Bubbles pop.
The average investor loses out, while the hustlers win big.

That's how the market works.

Those of us who looked at the graphs did predict this devaluation.
(I did repetitively here at ATS in many threads).
Here is a thread from last year where I declared confidently:

I have an opposite hypothesis. I believe there is most likely an over abundance of gold and that it is currently significantly OVERvalued. As a result, I infer that whoever is left with all of the gold in their hands when the music stops will have no where to sit. And they stand to lose massive % of their investment when the inflated commodity crashes. So my understanding of market economics is obviously diametrically opposed to the assumptions in the mainstream. Which by the way are promoted by big business, so ask yourself, ' why are all these nice companies giving me a good deal on gold ? ' Reality is they aren't giving you a good deal. They are a corporation and are profiting off the transactions. Hell it could be highway robbery but we won't know till gold prices crash. Everything that goes up, must come down, after all.

However if you have gold on hand, now is the time to sell it considering these are the highest prices ever. Buy low, Sell high

Sell it now, I'm telling you.

A "Takedown" ? Yeah.
But that's everyday business when you gamble.

After it finds the bottom (whatever that may be?) and levels out, the entire process will repeat itself over a period of many years.


Here is an interesting article about the Oil-Dollar correlation.

Oil is one of the most global viable commodity pegged to the U.S. dollar -the US dollar is the currency of choice in global crude oil trade.
As with any other commodities pegged in terms of the U.S. dollar, oil price tend to climb higher with weaker dollar.
Weaker dollar makes oil cheaper from non-U.S. buyer's perspective. So from investors perspective, it will be wise to buy a viable commodity like oil when it's cheaper. This could have a net effect of driving high demand causing price inflation for oil.
So high gasoline price translates to a weaker dollar and vice versa.

And here is the wiki on Petrodollars


I agree, it seems like the sudden crash of gold & silver is about to benefit someone. Most likely the rich?

Gold crashed as a result of big players selling their stash.
They are certainly rich now, and they benefited by causing everyone else to lose value through the sell offs.

It's hilarious the media 'experts' will claim "we don't know why the sell off happened derp".
I'll tell you why, because that's how you win gambling in the market. You rip everyone else off.