People demand spending cuts, with the exception that nothing gets cut.

So, according to the WeeklyStandard,

new poll conducted by Politico/GWU/Battleground finds that 76 percent of Americans favor "Cutting government spending across the board."


Now, warning..the above information is gained from -internet polls- which are subject to special interest skewing..but lets take that as is.

Good..fine..ok, so the majority sample of Americans want across the board spending cuts. Sounds like we the people are ready to tighten our belt and etc etc etc.

Seriously 13%, what is wrong with you. Your clearly not understanding the people here...across the board spending cuts..everyone suffers a bit. Shesh, how selfish and unrealistic your being. 13% should be the new word for when someone is being derpy and totally out of sync with the people of the US.


So they agree..76% are ready for across the board..now lets hit the details:
Pew Research on itemized list of cuts 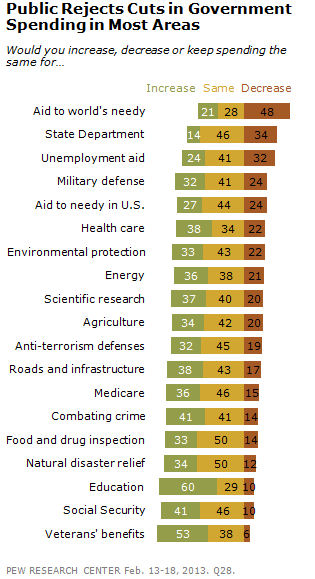 Seriously? Not a single majority in any area of spending?
If the 76% were being honest, then this should be 76% straight down the line for decrease! Yet, not a single majority for decrease on any issue, nothing..just nothing!
Devil is in the details...cut spending, but without cutting spending!
The only majority consensus here is for a INCREASE in Education and Vets bennies.

What the hell is going on here? Have we in the west been drinking the stupid juice for so long that we simply don't comprehend what the word cut means?

So..lets face facts..no politician on either side can cut anything without it being political suicide for them (when was the last time you actively tried to get fired from a job you enjoyed?)

Which means...revenue then (aka, tax increase) and stop asking the bloody people general questions...either give a detailed list of what they want cut right from the beginning, or just ignore the plebs.

A person is clever, people are near window licking, helmet wearing potatoes.

posted on Apr, 16 2013 @ 11:44 AM
link
And you, sir, have figured out the great mystery of U.S.A's great financial mess: None of its citizens want to sacrifice anything, and none of its politicians want to risk sacrificing their positions telling Americans what they don't wan't to hear. Thank you for pointing out what should be obvious to everyone and was obvious to me when I looked into this. We do, in fact, get the government we deserve. Great post.
edit on 16-4-2013 by ForwardDrift because: (no reason given)

It's unfortunate, but you ask the average person in American about what's going on in their country and most of them have no idea how things are run, or how they are supposed to run anyway.

So it's no surprise that people want spending cuts, but have no idea what to cut, so they say everything should be cut. When the truth is only a few key things need to get cut and some programs need to be increased in order to balance your budget and get your economy back on track.

Military spending and medicare/medicaid NEED to be reevaluated and sensible cuts need to occur. The same with foreign aid spending and a vast majority of the social assistance programs need to be redone.

You do get the government you deserve I suppose. It's no better here north of the border though.

Plus a bunch of other stuff I dont feel like typing.

Originally posted by tothetenthpower
Here's the problem with the whole thing.

Many do, but are reluctant as it would directly affect them.


Military spending and medicare/medicaid NEED to be reevaluated and sensible cuts need to occur. The same with foreign aid spending and a vast majority of the social assistance programs need to be redone.

As for the rest of it, a vast overhaul must be done. I would even go so far as to say that if a individual has $1 million+ in investments, then maybe they should not be able to qualify for MediCare/Aid & SSN. (However, if they are taking care of a extended family that should be taken into consideration as well)

I think that all bills should be based as stand-alone as well. NO tacking on other funding, ie; Pork Barrel types

posted on Apr, 16 2013 @ 11:59 AM
link
I would find it interesting to see how near we would get to the current spending level if we cut all spending now and added it back in slowly over time when we found we needed it.

Kind of like cleaning out an old trunk, you pull everything out dust it off and see what you really needed or wanted to hold on to.

posted on Apr, 16 2013 @ 12:00 PM
link
America needs to cut in the military, in government bailouts, in paying back the FED (it's rigged to be impossible to give it back anyway) and to foreign aid (Israel and such).

Where they need to be spending more is on the poor to give them jobs and to tax products sold in America being made by companies that have been outsourced out of the USA by those same companies.

Trickle down is a thing of the past with a world based economy we have now, especially for "wealthy citizens" countries like USA, Canada and the European countries.


Many do, but are reluctant as it would directly affect them

The notion that doing nothing because of consequence is better than doing something, which will lead to worse consequences is a bad one. If the general populace were in fact educated on the correct things, they never would have allowed the last 20 years of economic policy to take place.

Yeah there is a problem with congressman and senators creating projects for jobs in their districts or states. I understand the want and right now the need to have jobs, but doing it superficially like that is nonsense. The government can't create jobs, and shouldn't. They are only responsible for creating the environment that allows job creation.

IMO you need to create an opt outs system for SSI and Medicare/Medicaid. Allow young people to invest in their own retirement and health care. As for the tax the rich policy? Well IMO flat tax is the way to go.

10% or something of that nature, not on your income, cause income tax is theft, but on assets.


A person is clever, people are near window licking, helmet wearing potatoes.

Yep, sums it up nicely.

I say cut it all back.


I think that we could balance our budget cutting this crap alone.

posted on Apr, 16 2013 @ 12:12 PM
link
Everybody is for cutting government pork. Until that cut comes from a program they benefit from that is... posted on Apr, 16 2013 @ 12:49 PM
link
Maybe if we got rid of the high salaries of all the people trying to cut down on spending, the budget would balance itself. The GSA program is very wasteful with their extravagant parties

posted on Apr, 16 2013 @ 04:20 PM
link
I know I have seen many threads on this but Yes I agree that most americans don't have a clue about what the goverment spends.

I think we need to stop all the pork spending, like we really need a deer underpass in Wyoming, just to start there is a list of about the top 100 pork spending that just don't make sense.

I would also look at the Obams and limit them to two weeks of vacation, since he has not earned more than that like every other person who takes a full time job, the more years the more Vacation.

Stop the BS spending in the white house, example going Golfing with Tiger Woods, $1 million dollars, Get ride of the barber that makes $100000 dollars for cutting hair for congress, which we pay for, my work don't pay me to keep my hair short and trimmed, or the Obams dog sitter makes over $100000 dollars for watching a dog.

Lets take a look at the wasteful spending first then cut of the foreign aide.

The list that was posted needs to be looked at but you just cant take a pole useing that list unless you mention all the others, its a one side question.