posted on Apr, 16 2013 @ 01:57 AM
link
I'm not one for constructing my own theories, but I came across this photo on Twitter this morning, and wondered what you guys would make of it?

Could this figure have something to do with the blasts that occurred yesterday? Or was this person simply caught on film in the wrong place at the wrong time?

Originally posted by Lulzaroonie
Or was this person simply caught on film in the wrong place at the wrong time?

This was posted shortly after the explosion became news, and at the time I thought the location was an ordinary place set out for humans. Its a rooftop, but has a clear fence around it, and my impression is that people probably hang out there all the time.
Especially if they wanted to get a view of the marathon.

So, IMHO, person caught at an ordinary place.

Edit - google maps shows this view of the rooftop.
I've put the location of the person as the red circle... 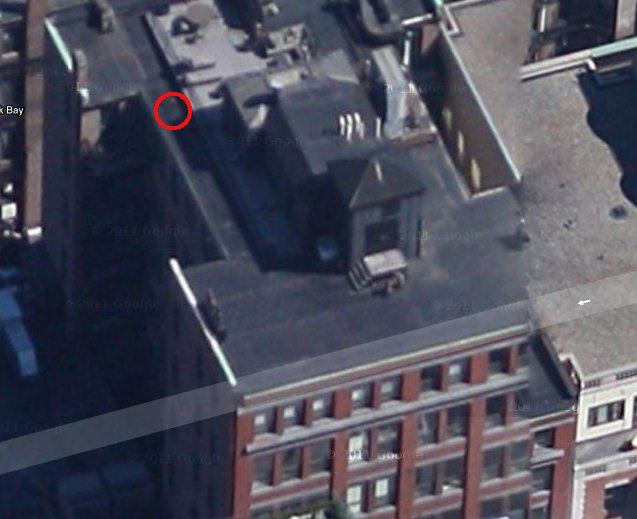 To the lower right is Boylston Street where the marathon is being held and the bombs went off.
Given that the photo was taken slightly after the second bomb, which went off 10 seconds after the first, then it is entirely possible that the person heard the first bomb, started to walk towards the direction of Boylston St, and was photographed 11 seconds later.

Remember, they're not running away (like after having thrown it off a roof), they're walking towards it after its already gone off.


I actually have to say, I agree with you. I don't think they could even see the explosions from their position, but are clearly walking towards the street, maybe to get a better look?
If I was going to pull this off, I would be standing from the side of the road this photo was taken from, not above the blast. FBI take note.
edit on 16-4-2013 by Lulzaroonie because: (no reason given)

In all seriousness though, I believe it would most probably be an innocent individual who was only up there for the sole purpose of watching the marathon.

Investigators have warned police to be on the lookout for a "darker-skinned or black male" with a possible foreign accent in connection with Monday's bombings at the Boston Marathon, according to a law enforcement advisory obtained by CNN. The man was seen with a black backpack and sweatshirt and was trying to get into a restricted area about five minutes before the first explosion, the lookout notice states.


Real funny people are getting blown up isnt it? Real funny.


Hmmm... without knowing more about this restricted area, we're just going to have to assume it wasn't the rooftop of the building in the photo for now.
Does anyone know what building that is?

EDIT: I've got to crack on with my day guys, get my son ready for school and get some groceries etc, but I'll check back when I'm done.
edit on 16-4-2013 by Lulzaroonie because: (no reason given)

Originally posted by Lulzaroonie
Does anyone know what building that is?

This page shows a map of where everything happened.
So the person is on the building above the place of the second explosion.

Originally posted by milkyway12
reply to post by daaskapital


Real funny people are getting blown up isnt it? Real funny.

This particular meme though was quite funny, despite the atrocities that occured.

How is it wrong place wrong time? Seems up there was the safest place at the event.

If you want to be "real", any minority in a picture would be more "suspicious" than a guy on a roof.

Any pictures of weird face-like clouds in the area? Maybe the cloud-being regurgitated some bad stuff and it materialized in the form of an explosion.
edit on 4/16/2013 by Turq1 because: (no reason given)

Sorry, I missed it. Why do you say this is a restricted area? Second, what do you suspect him of? Throwing the bomb? Shooting survivors?

My first reaction is that it was a regular building occupant who wanted a view without fighting the crowd. I'm open to something more serious.


I meant more in terms of whether it was a business (and if so, what business is it?) or whether its residential, in which case, roof access will probably not be restricted.

And I didn't make the picture, I only stumbled upon it this morning on Twitter, and the way it was presented made it seem as though it was something potentially suspicious, so hence the title, I was wondering what members here thought.

posted on Apr, 16 2013 @ 02:47 AM
link
You would think that if this individual, was on a roof top, on a property that is so close to a sensitive area, that unless 'something' happened, no one would have noticed him or her. Having 'observers' on the high ground during these kinds of events would be SOP for security personnel by now I would imagine, like the ones they have at the Super Bowl and stuff like that. If he hadn't been seen previously by Law Enforcement, maybe they had some holes in they're physical security plan. It's possible. After all, the blame game hasn't really started yet. I mean, besides like here on ATS that is.

Originally posted by Lulzaroonie
reply to post by alfa1


And I didn't make the picture, I only stumbled upon it this morning on Twitter, and the way it was presented made it seem as though it was something potentially suspicious, so hence the title, I was wondering what members here thought.


I'd be ironic really. But as they say, "The nail that stands out gets pounded down".

posted on Apr, 16 2013 @ 02:57 AM
link
I can't really see anything strange about this. Whenever I've been to an event like a marathon or street race, there's always been people watching from the roof tops - it's a good view for something like that. It could even be a press/freelance photographer who's paid his way to getting access to snap the finish.

However, this was a while after the elite runners finished. Perhaps it'd make sense to compare the bombing roof image to a similar one welcoming in the elites - I'd expect to see more people on that roof for the 'big finish'.

Unless it's simply a police 'spotter' for suspicious types. That happens in the UK a lot to police soccer crowds.
edit on 16-4-2013 by KingIcarus because: Just an extra point...

posted on Apr, 16 2013 @ 03:11 AM
link
It looks like someone walking merrily across the roof hands in pockets, i could of imagined a group of people up there watching it for a bit having a party of sorts and then heading down to the ground to watch it closer and someone just heading up there to tidy up before they get told off once it got a bit boring

I mean imagine anyone on a balding with the idea of simply watching the marathon. Ridiculous. Who in their right mind would do that?

But I'm surprised you didn't see the UFO in the photo!


Don't you think you're being rude, calling me stupid when I only posted a picture I found that someone had made asking what people thought about it, rather than saying "OMG LOOK AT THIS PERSON ON THE ROOFTOP, I MADE THIS PICTURE BECAUSE CLEARLY THEY ARE THE BOMBER" 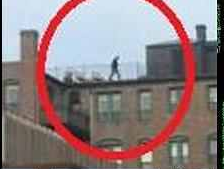 
this is why im starting to wonder about ATS threads now, it seems people post and dont think about the other side of the story. thats exactly what i dont want. Something thrown on the table like "look alien!" "no thats a dog" and then they are like "ok ok but it could have been an alien...maybe..." Then thread ignored.

Im just saying and venting little bit on this thread. Sorry if that came off strong.
These are like 1 minute threads...
edit on 16-4-2013 by NotAConsumer because: (no reason given)