posted on Apr, 13 2013 @ 09:31 AM
link
Lion Air flight JT904 from Bandung to Denpasar (Bali) veered off the runway into shallow waters on landing early this morning. The incident broke the back of the aircraft, which stayed floating in the waters just off the end of the runway, between the aft fuselage and the back of the wings.

There were 101 passengers and 7 crew on board the flight. As many as 45 were taken to local hospitals with various injuries, none life threatening.

"The aircraft was in landing position when suddenly I saw it getting closer to the sea, and finally it hit the water," Dewi, a passenger who sustained head wounds in the crash and uses one name, told The Associated Press. "All of the passengers were screaming in panic in fear they would drown. I left behind my belongings and went to an emergency door. I got out of the plane and swam before rescuers jumped in to help me."

posted on Apr, 13 2013 @ 05:08 PM
link
I saw this on sky news and told my mrs her response was 'well at least it didn't catch fire it's safer to crash in the sea' I corrected her as crashing in the sea can be a lot worse than the ground. I showed her the Hudson River ditch and explained that the pilot done so well to make sure the wing tips didnt catch the water otherwise it would of be worse


live up to your screen name
and go back and tell her she is correct.

posted on Apr, 13 2013 @ 06:44 PM
link
The aircraft in question was delivered in March of this year. Lion Air has come out and said they undershot the runway by 50 meters and impacted the water short of the runway. The media has (of course) started comparing this to the "Miracle on the Hudson", which is a joke, since I'll almost guarantee that this crew screwed the pooch, where that crew did everything right.


This is what could have happened with the Hudson flight. This flight was preparing to land, so they impacted relatively flat so there was no danger of it happening to them.

posted on Apr, 13 2013 @ 06:55 PM
link
Everytime I've flown on a 737 no matter which version I've sensed a noticeable yawing oscillation, it really doesnt seem to matter what the flight profile is either.

I feel the yaw whether its smoot air, turblent, takeoff or landing on this type - having piloted small AC it just does not feel right to me - never has.

Most interesting was a Peoples Express flight on crosswind takeoff as AC attained V1 its starboard wing canted over till it was only 1 to 2 feet off runway surface and A/C was riding down runway for better than 1000 feet going by the markers on its starboard main gear all the while maintaining a heavy crab to port.

That was a seat arm crusher as the smell of the main smoking rubber came into the cabin - seat of pants was saying pilot had no more rudder to work with and ailerons were full counter position for port bank. It was only when that starboard main lifted that the A/C regained attitude.

Since then I've often wondered about its handling below V1 on landing and whether they have enough rudder authority at low speed.

Of this mishap may be due to many other possible causes such as hydroplaning to thrust reversers to brakes I just wanted to add my 2 cents since I have not noticed the peculiar yaw in other types nore have I experienced anything close to the crosswind takeoff I described above in other types.

Originally posted by Zaphod58
The aircraft in question was delivered in March of this year. Lion Air has come out and said they undershot the runway by 50 meters and impacted the water short of the runway. The media has (of course) started comparing this to the "Miracle on the Hudson", which is a joke, since I'll almost guarantee that this crew screwed the pooch, where that crew did everything right.

Zaphod58, saw a photo on another site and it looked like an overshoot not undershoot as the planes nose was mostly facing out to sea with its back broken.

The Transportation Ministry's director general of aviation, Harry Bakti Gumay, said the plane overshot the runway and fell into the sea from a height of about 50 meters (55 yards).

Photos and video there as well.


That's what I thought too, but Lion Air, and passenger accounts say differently.

Transport ministry official Herry Bhakti initially said the plane overshot the runway, but later clarified his comments to say it landed straight in the water. Officials said they were still determining exactly why it ditched.

The Boeing 737, operated by Indonesian carrier Lion Air, broke apart as it hit the water while coming in to land. Passengers described screams of panic and fears of drowning as the cabin plunged into shallow waters. Twenty-two passengers were taken ashore suffering broken limbs, head wounds and shock but, incredibly, all 108 people on board survived.

Now they're saying the pilot may have ditched deliberately and reported engine troubles.

The crash happened just after 5.15pm AEST when the Boeing 737, which had come from the popular shopping town of Bandung, West Java, apparently ditched short of the Ngurah Rai runway after the pilot reported engine troubles.


Not just Airbus, they ordered a huge number of Boeing aircraft as well.


Thats quite baffling, screwed up missed approach? power settings to low? they reported light rain but almost would approximate a microburst situtation or at least a strong storm outflow having pilot reduce power settings to an extent making him short of runway.

Originally posted by gosseyn
Lion air just made the biggest order of aircrafts in history with more than 230 airbuses A320 for more than 18 billions €
www.english.rfi.fr...

Originally posted by slugger9787
reply to post by ThePeaceMaker


live up to your screen name
and go back and tell her she is correct.


Ha my screen can have many meaning I chose it because I am one for not arguing or getting into some causing problems I accept people's opinions and believe my own i acknowledge peoples experiences and infomation they share I'm just an overall good guy. I just don't get the world some days at the end of the day we are all human beings yet we kill rape and destroy each others lives.

But my screen name could also describe a American ICBM I swing both ways hah. Sorry for the off topic reply

Originally posted by Zaphod58
reply to post by ThePeaceMaker


This is what could have happened with the Hudson flight. This flight was preparing to land, so they impacted relatively flat so there was no danger of it happening to them.


That's what I was trying to explain to mrs what happened in that video having left my phone at work I couldn't show. She didn't seem interested anyway see political lol. She hadnt heard about the Hudson River ditch!
edit on 14-4-2013 by ThePeaceMaker because: Added text

Thank goodness - what a tragedy it could have been! 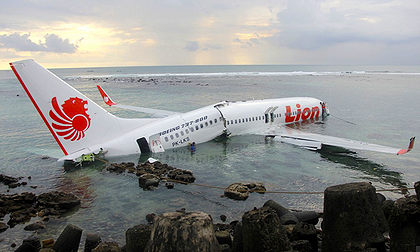 Now for the funny bit.
Carnival Cruise Lines came out with a press release saying, "We can top that!"

posted on Apr, 14 2013 @ 07:59 AM
link
I always worry when airlines expand rapidly. Do the companies believe that suddenly introducing hundreds of aircraft into a fleet is sustainable in the short terms. Where do they get the experienced flight crew and engineers from without impacting the current organizational structure. It is not like these people grow on trees.

What you end up with is "pilots" with little flight time experience, who would be a junior FO in any airline in Europe of the US. being thrown in to the right hand seat and command.

If the plane overran, then they have to look at runway conditions, and approach config, speed altitude CRM etc.

of the plane ditched before the runway, perhaps this could be another Schiphol, just from a lower altitude and into water.

Either way the actions of the crew will be under scrutiny.


I'm wondering if this is similar to a crash in England years ago. In that particular crash, you had an experienced crew, who had just recently transitioned to the 737-300, from the 732. Shortly after take off, they experienced a vibration, and smoke in the cockpit. On the 732 each engine had a vibration monitor, and the AC ran through the right engine. On the 733, there was one vibration meter with two needles, smaller than the ones on the 732, and the AC runs through both engines. The crew shut down the right engine, which caused the vibration to stop, so they thought that everything was ok, and headed for a divert airport nearby.

About 15 minutes later there was a bang, the entire airframe started shuddering, and they lost all power. The problem had been in the left engine to start with, and the crew misidentified it and shut the wrong engine down. They ended up crossing just above a major motorway, and slammed into a hill just short of the runway they were going for.

I'll dig into this during my down time starting tomorrow afternoon, but if Lion Air had something like 736s or earlier, and this was a new 738, that would explain it. The 738 is larger and heavier than earlier versions, and if the crew wasn't familiar with it, they might have set the wrong power setting, and thought they had an engine problem when they sank faster than expected.