posted on Apr, 13 2013 @ 08:11 AM
link
North Korea is becoming a pain in everyone's side. Even Russia have publically declared they are sick to death of North Korea's hostility and telling them to pack it in and I suspecct China privately feels the same. We have since December really seen constant threats from NK. So far the crisis has been handled very well by humanity. Had this crisis occured during the Cold War it would have gone nuclear by now I am sure. But what of the current situation? Will this crisis show that actually if really need be that the world can come together against a country like NK which threatends global security? Or will the current crisis spill over into war but instead of a UN sponsered invasion of NK, countries fall apart over what to do and fight each other and thus the world plunges into a world war it did not really want.

We should think of our children. Their futures. When and if they get a chance to grow up they are not going to give a too hoots to this crisis, it will be an exam paper question probably! I can see the question now

The Korean Crisis of 2013: A Missed Opportunity To Free A Nation and Unite Asia. Discuss.

Do you think that this crisis is THE test? Has Humanity mutured enough this time to handle it and avoid nuclear war? North Korea might let off a nuke like what the USA did in Japan for example. But will we contain this and not allow this to slip into a more dangerous and wider nuclear strike? Or is THE test yet to come?

Would love to hear your thoughts

We are lucky to live in North America. We have bountiful resources, less population density and a climate that allows us to thrive while forcing us to innovate constantly to survive. The rest of the world... not so much, save for northern parts of Europe and even Russia. They dont have these favorable conditions and will thus continue to have terrible conditions until such a time comes that technology allows us to distribute unlimited resources at very low energy or financial (if such a thing still exists) cost.

There is a reason why some part of the world have seen endless conflict. Due to the nature of the planet we live in, it is very doubtful that it will ever change.

There is no hidden meaning or special agenda going on. You simply have X amount of years of being alive in which time you can do whatever you wish. Then you will simply cease to exist. Hate to ruin your fantasy.


Here is how I see it...Kim Jong-un and his cronies...are definitely up to no good; right now he is like a peacock walking around with all his feathers out for everyone to see; He wants his nation and the world to know...that he is powerful.

NK has a massive disciplined military; and so does their ally China. Plus I think they also have Iran and Russia in their back pockets.

And...the last couple of days it has been said that NK has the capabilities to attach a nuke to a long range missile and it could reach Los Angeles, CA.

Is there reason to be concerned and worried? Absolutely yes...and really if you read between the lines; just what information are TPTB keeping from us.

Regarding all of this; it is my opinion that the year 2015 is the year to be worried about.


NK has a massive disciplined military; and so does their ally China. Plus I think they also have Iran and Russia in their back pockets.

Looks like China is not going to be one that NK can truly rely upon...this came over the wire this morning... 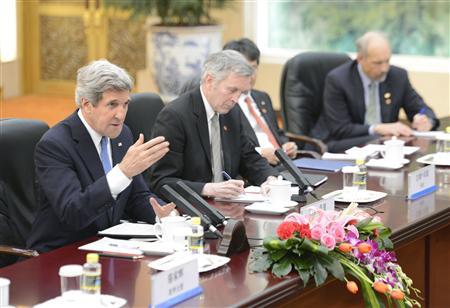 
I hope this news is true. I really feel that Kim Jong-un is crazy enough to do something anyway...but I am hoping that his advisors who also advised his Father in the past will talk some sense into him.


"The Korean Crisis of 2013: A Missed Opportunity To Free A Nation and Unite Asia.

Do you think that this crisis is THE test? Has Humanity mutured enough this time to handle it and avoid nuclear war? "

The TRUE question that you are seeking to ask is - "Has Humanity matured enough to handle and avoid nuclear war?"

The answer is YES. We know the dangers and fears over nuke toys, the logic and reasons for non-proliferation, BUT unfortunately, there are still a dangerous FEW whom are totally stupid and irrational, and presume nukes are a solution to everything in life, which is a fallacy, but nevertheless, what can one expect from the insane?

As for the second question of the korean crisis of 2013 and opportunity to free a nation, I believe that the answer will have to begin after world war 2. Briefly:-

Russia and USA had agreed to boot out imperial japan from Korea, russia from the north and US from the south. They succeeded and meet in between at the 38th parallel.

US was willing to concede the lands to koreans for self determination and even organized an election whereby a president was elected, but unfortunately, Stalin did not, renaged upon UN ideals to end all conquest, and supported a trouble-maker street kid bully masquerading as anti-japanese freedom fighter - Kim Ill Sung to become the ruler of communist north korea.

This bully then blitzkrieg upon the unarmed and pacifists all koreans in the peninsula down to the south. Fortunately, US and UN came in to protect the korean people and drove the streetpunk back to the Yalu River.

Unfortunately, China supported that streetpunk and warned it will not tolerate any incursions across the border.

China then was led by the devil Mao. General MacArther, then the commanding officer, was prepared to teach devil Mao a lesson he would never forget for supporting that streetpunk and interfering in Korean affairs. China under Mao was not recognized by UN then, as only Chiang Kai Shek was the legitimate China ally in WW2 and its affairs, whom was booted out of China by Mao who reserved his forces in fighting Japan, then with a weakened Chiang, seized power.

Unfortunately, the petty public official known as Truman got cold feet with a war with China,let alone use atomic bombs, and refused to supply MacArther with even conventional arms, resulting in him having to retreat 35 miles south of Seoul and being sacked.

General Ridgeway was tasked to take over, and managed to lead the american and UN forces across back the 38 parallel and into striking distance of Pyongyang, but he stop short, as he obeyed his orders and oath to the coward Truman, and negotiated for peace, which resulted in the streetpunk returning to Pyongyong, supported by Mao.

Mao refused peace and stalled negotiations for 2 years. Finally, the then President Eisenhower had enough and did what MacArther recommended then - atomic weapons will be used if Mao does not back off. True enough, within months, in 1953, a truce was declared, as Mao then did not have nukes.

The point is this - General MacArthur had been proven right in his strategy towards NK and China - using atomic bombs if need be although not necesarry as conventional artillery barrages would do.

Grandpop Kim - Kim Ill Sung - had stuck his middle finger to UN and went on a conquest - that itself was an act of war against UN that had sworned never again to wars of conquest by any nations after WW2 and are prepared to defend it militarily, and proven when MacArther pushed him back.

Although the terror of atom bombs cannot be disputed, but then, it would have put enough fear into rogue China then, to play ball to UN. If they don't and the attack into China occurred with arti, thousands would die.

But the thing is - If MacArthur had done that, it would have freed the Chinese People from the devil Mao, and politics would have changed. The original commies were not of the Stalin mould, but more towards socialism, and market orientated policies to upliff the lives of the Chinese masses, such as the reformist Deng Xio Peng whom Mao jailed for decades out of petty jealousy.

But Mao was spared by the stupid and yellow Truman, allowed Mao to rule, and within decades, MILLIONS of our fellow chinese brothers and sisters were slaughtered or led to their deaths thanks to the cult and policies of Mao for decades, and today, the NK streetpunk's descendent is threatening mankind now.

We mankind failed the first test over Korean War 1. The result of the Korean War 2 is still...awaiting and need not fail if we know what to do with NK-the true culprit, when the war is won. It is now a different China today, more keen on economic uplift than failed idealogies of the past. One thing for sure is that US,SK and China will not need to use nukes to deal with Fatboy Kim . Only the insane will - NK.


And don't forget that Patton wanted to keep his tanks going straight into Moscow to take down Stalin. Imagine if we had listened to our generals and how different the world would be today?

Would it be better or worse?

We can only guess but it would be far different for sure.

posted on Apr, 13 2013 @ 03:31 PM
link
Just goes to show the long term ramifications of a world war. WW2 and its consequences has had long lasting reprecussions over two centuries, on a politcal, socio-economic and human level. Can you imagine what WW3 would do even on a non nuclear scale. We HAVE to ensure the crisis over NK is handled correctly or better still send in a UN force to free the ordinary North Koreans who have suffered from 60 years of hell on Earth. And then there is the horror of the many concentration camps to uncover.