2013 Unrest
Tambora volcano, Indonesia was raised to level 2 alert (waspada) on 5th April 2013 after an increase in seismic activity.

To give you an idea of what this monster is capable of:

2011 Unrest
Tambora volcano in Indonesia has been raised to level 2 alert (out of maximum 4) on 30th August 2011 after an increase in volcanic earthquakes. Alert level 3 was issued on 8th September 2011. In April 2011 there were 37 shallow volcanic earthquakes recorded, 167 in May, 277 in June, 363 in July, and 141 from 1-29 August. Continuous tremor was recorded on 29 and 30 August. Tourists and locals are advised to avoid the summit area of Tambora volcano.

Tambora erupted in 1815 killing 92 000 people making 1816 the year without a summer as the global climate effects were felt. Aerosols from the Tambora eruption blocked out sunlight and reduced global temperatures by 3 deg C. Europe missed a summer, and India had crop failures following the Tambora eruption. 100 cubic km of magma was erupted. Ten thousand people were killed immediately from the pyroclastic flows and the eventual toll due to starvation and disease may have been as high as 117,000. The eruption caused a tsunami with a wave height of 10 m.

Yep, this is one of the big dogs, and has a 6 km wide crater. More here:
www.volcano.si.edu...

It's scary to think they were recording continuous tremor back in 2011 at Tambora, and the alert level went to three out of four. Since it didn't blow up again, who knows, maybe it's headed that way this time with the increase in seismic activity.

Wish I could monitor the seismic activity, but I don't have access to that network. Considering the massive amount of magma erupted back in 1815 though, causing the year without a summer, I don't see how there could be that much eruptable magma down there to cause another catastrophe any time soon. But never underestimate a volcano. Especially one THAT big.

I would think that there would need to be some massive uplift of the caldera before anything real bad happened again. But you just never know. I worry about Toba more, to be honest, with that massive resurgent dome, Samosir Island, rising like a mountain in the middle of that lake. But Toba isn't the one with continuous volcanic tremor as close back as 2011.
edit on Sat Apr 6th 2013 by TrueAmerican because: (no reason given)

posted on Apr, 6 2013 @ 06:20 AM
link
One of the big dogs...what a great description. Thank you again for the updates and I will be watching closely. A big eruption here would affect ALL of us, and the world is a very different place from when the last one popped.

posted on Apr, 6 2013 @ 06:25 AM
link
If it does erupt I wonder how it will effect flights from America back to Australia with the Ash, Ive got a female friend heading back at the end of the month I really hope all will be ok i'm a worrier for the people that are close to me 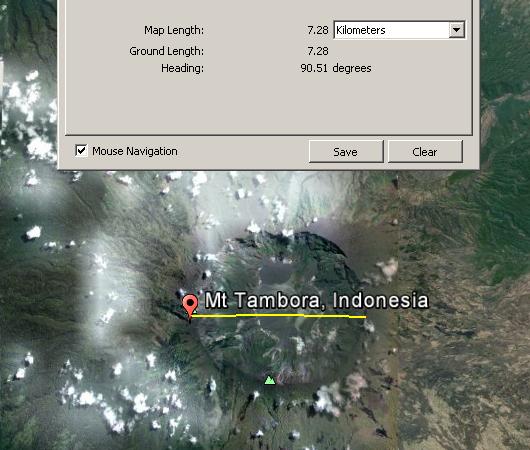 The MAGNITUDE of this particular volcano is MASSIVELY HUGE!

Personal Disclosure: I did a LOT of geology, plate tectonics and vuclanology science in high school because I wanted to be an architech since to me foundations are everything.

This SCARES me MORE than the Yellowstone national park super volcano!

Originally posted by OmegaLogos
This SCARES me MORE than the Yellowstone national park super volcano!

Well, that's just because Old Yeller ain't barked at us real good one time yet. One of these days YS is going to cough, and it won't be pretty.


So we all should be!
I'm pretty certain that the magma chamber under Tambora was found recently to be bigger than /yellowstone. I'll go looksee if I can find the report.

Originally posted by angelchemuel
I'm pretty certain that the magma chamber under Tambora was found recently to be bigger than /yellowstone. I'll go looksee if I can find the report.

Yeah, I'd like to see that report. Cause I think you might be getting Tambora and Toba confused, is just my guess. Toba's magma chamber is slightly larger than YS's...But I never heard that Tambora's is larger than YS's- even though it is still huge enough to cause a VEI 7 eruption. It takes a real long time to refill, which is why a very bad eruption at Tambora is very unlikely. There have been many small eruptions there already, and chances are the next one will be small also. Toba and YS are in categories all by themselves.


Thanks TA...you are quite right, and senility has set in with me!


Its important to remember that mountain removing blasts are seldom followed by the same type of eruptions. Krakatoa has erupted numerous times, even building a new cone, but there is no danger of a repeating the 1883 event in the near future.

The last big Yellowstone eruption was followed by a series of smaller eruptions. I believe it is unlikely that a continent covering blast will occur at Yellowstone. If it goes, it could still be the largest blast since Tambura, though.

I believe that a new Tambura eruption, while significant, will not equal the 1815 one.