Anyway, I'm female, I'm probably older than most here, I'm an old-style Liberal (meaning, fiscally somewhat conservative, socially not conservative at all, but I believe in personal responsibility and acting with honor). I live in Massachusetts, right near the coast, well 10 or so miles from it, but close enough for government work. Which actually was my last job -- yes, I was a government subcontractor to a project for the FAA, but sorry, there really aren't any secrets I could tell you about because there weren't any secrets. Unless you think government waste and fraud is a secret, because THAT I can tell you stories about.

I'm a Catholic who never attends Mass and am technically an excommunicate because back when I did go to Mass, I was actively using birth control and *gasp* receiving the Sacrament. Along with about 98% of the rest of the female portion of the Church.

Of course I have a cat and am crazy.

See? Nothing too interesting here!

I will say that I've never seen a forum like ATS. The first time I read it, I was sure y'all were crazier than I am .... which is what intrigued me. Which is why I'm still here. And to my surprise, I've found that there's a lot of good information here, and even in the short time I've been here, I've learned a lot, and am looking forward to learning more.

I do only have one cat (but he's a feral little bast**d). However, the resemblance between me and the Crazy Cat Lady in that skit is.... uncannily accurate.

I also yell at kids out the window to Get Off Mah Lawn. And I don't even have a lawn being as I live in an apartment building. It still amuses me to yell at them.

I also yell at them for cussing, which is truly hypocrisy as I am a World Champion Cusser!

I see it in action all time .

But,I would love to hear your personal stories.

posted on Apr, 3 2013 @ 01:11 AM
link
I'd love to tell some real good stories.... but there are things I can't say on an open forum. Not that any of it is Top Secret, but I'm looking for a job, and the last thing I need is a prospective employer reading anything they could consider corporate snitching. So for now, I do have to keep things a little private.


I like how the poor Cat Lady was once an upwardly mobile young urban female. posted on Apr, 3 2013 @ 06:04 AM
link
Hey there,welcome to ATS-another catlady-yayyyy Someone wants to say Hello

People with some traditional values are rare and I truly appreciate every one of them. I used to be a Christian as a youngster, much later I found Falun Dafa Qi Gong and now I have a very strong health, and a more humble mind...

I wish you all the best in the future!


Greetings.
This picture is lovely... 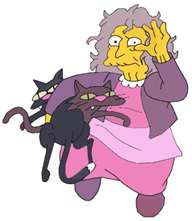 I have thought I would be the crazy cat lady when I'm older...can't wait!

Glad you made an introduction, nice to 'meet' you.


Well hello wolfbitch and hope you enjoy your time on ATS!

It's always a little weird when you start out on a new forum -- you never know in advance if you'll be accepted or merely dismissed as another troll or a******. I'll try not to be either one.

But no promises -- I can get just as worked up as anyone else, though it's a refreshing change internet-wise to get all worked up over facts instead of personalities.

This will be a bit of a change for me. While I love arguing the facts, most of the forums I have frequented are more interested in arguing the presenter of the facts.

I'm looking forward to being here for a long time!