posted on Mar, 28 2013 @ 07:59 PM
link
Came across this and didn't find anything on search thought it might be worth discussing..strange indeed.


Any more to add?

I'd rather see more here before I go to another site.

OK, I went there and discovered a space dude (Dudette?) carrying a towel.

"A man who can travel the depth and breadth of space and still retain ownership of his towel...is a man to be reckoned with."

A) It's on beforeitsnews

B) The artifacts don't seem to match one another (different symbols, different types, different drawing styles).

It makes me suspicious.

posted on Mar, 28 2013 @ 08:08 PM
link
I love that first engraving/coin. Looks like a person (woman) in a space suit. What is the signifiance of that figure? Is that a common motif?


Is that a ancient ATS logo!?


Something else going on here,Jude.

Back on topic,those artifacts,I do believe were proven to be a hoax a few years ago,but I will show you mine when you show me yours.

Did the head craftsman call in sick on this day? 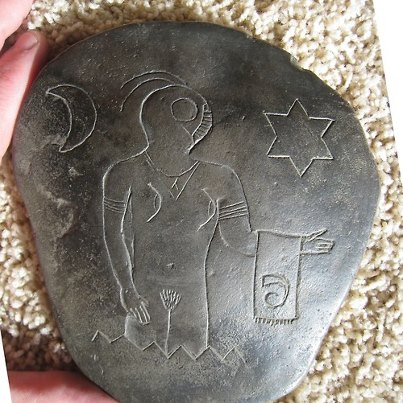 A bug female alien on the way to the shower?? come on the link even said

Unfortunately, Burrows refused to reveal the location of the cave to mainstream scientists, and the artifacts that allegedly came from the site were all shown to be frauds. After decades of debate, the Burrows Cave is now widely believed to have been an elaborate hoax.

There maybe genuine old world new world artifacts perhaps even with an ET twist but this ain't one of them.

posted on Mar, 28 2013 @ 08:56 PM
link
I don't live too far from there and I have heard nadda about any of this on the local news...I would think some local news would have picked up on that...and caves in salem? I don't know but it's pretty darn flat up there....caves are usually down in lower counties..Massac, Hardin, Johnson counties..


I thought they looked masonic...angles and parallels and all...

Take the title of the story and search it.

Introduction of Harry Hubbard by Michael Edward. Background, stories, events leading up to the discovery. Treasure books and treasure writers. The initial discovery in 1925. How Harry learned about Burrows Cave from David Hatcher Childress. How this tomb got here in the first place, who is buried in the tomb. Where history leaves off. Details of land area / river region and Little Egypt. Video features actual scenes from the ravine system in Illinois where the Tomb is located as well as dozens of artifacts.

In spring of 1925, a local resident, Orville Lowery, of Hickory Hill, in the southeast corner of Marion County Illinois, was busy with his two daughters removing rocks and debris from an area designated to be the family garden. His eldest daughter, Fern, who was six years old, began to explore along the ledge of the ravine next to the garden spot. Several feet away from the bluff, Fern discovered a hole cut through the sandstone by human hands. She called her father over to investigate the hole which he determined was of ancient origin. Orville worked diligently for years attempting to get professional investigators from the state of Illinois out to the site to examine this entrance into the subterranean cavity. Orville was met with futility as the Illinois experts sloughed off the idea that anything of ancient significance could possibly exist in the most remote regions of Marion County. However, Orville was able to get Fern's discovery recorded in the WPA journals in Salem, the county seat. Frustrated for lack of interest, Orville later sold his property and moved to Mt. Vernon about 20 miles away in the early 1930's, taking with him his two charming girls. Fern and her sister grew up in Mt. Vernon, got married and moved to different states forsaking all prior knowledge of their family discovery. Orville, likewise ceased to pursue attempting to arouse the bitter scholars who had neglected him so many times.

Probably not look below we have vag..

posted on Mar, 28 2013 @ 09:56 PM
link
I was in a hurry to watch NCAA sorry for not posting my own thoughts yet. I think we can safely say the marking and artifacts don't look like they are native American. Don't look Viking either. So those aspects alone make this interesting. I realize the "alien artifact " is probably a stretch..as is the lost tomb of Alexander. Come on in Illinois..Alexander crossed the Atlantic..

posted on Mar, 28 2013 @ 10:49 PM
link
reply to post by BlackProjects
Why not speculate that he may have made the journey? Have you ever heard of the Kensington Rune Stone? It was found in Minnesota and is believed to predate Columbus. Anything is possible.

Originally posted by evc1shop
reply to post by BlackProjects
Why not speculate that he may have made the journey? Have you ever heard of the Kensington Rune Stone? It was found in Minnesota and is believed to predate Columbus. Anything is possible.


And when would he have had the time to make an Atlantic journey died there to have a tomb,and didn't Alexander died in Babylon in 323 BC before realizing his plans to conquer Arabia. now not to say the rune stones in Minnesota are not real I don't know but it is also interesting that there is a strong modern Scandinavian community there so the runes "could' stem from them. 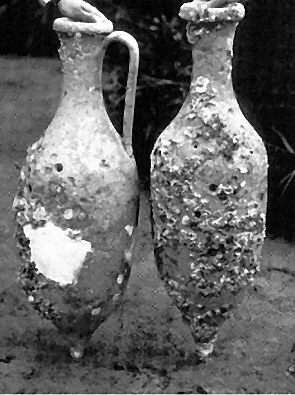 Now there are some very convincing looking artifacts such as these Roman era Jars from Brazil until the person who made them declared them to be so.

Fig. 3.2 Roman amphorae brought up from the seabed at Guanabara Bay, Brazil.3 A complicating factor is that Américo Santarelli, an Italian diver living in Rio de Janeiro, revealed in a book published in 1983 that he had 18 amphorae made by a local potter, and had placed 16 of them at various places in the bay, intending to recover the encrusted amphorae later to decorate his house. To prove this, he recovered 8 of the amphorae.4 This led to all such finds being dismissed as fakes.

Why would anyone go through the process of mudding the waters with fake artifacts even good ones is beyond me,one would have to take a lot of time and energy to separate the wheat from the chaff,it's the same with UFO vids and pics a lot of fraud and hoaxes lumped in with the genuine thing will cause many to throw out the proverbial baby with the bath water.

posted on Mar, 29 2013 @ 07:35 AM
link
There is no evidence that Alexander the Great went to the Americas, what so ever. These artifacts do not represent a change in that. Alexander the Great was proud of his homeland, and of his exploits in war, and in empire building, and if he HAS a "lost tomb" then it will be found in lands which he had under his dominion, not in some vast and unheard of land across a massive expanse of ocean.

Also, the "artifacts" themselves do not, in the main, appear to be of a quality or richness which one would associate with the burial of such a vastly powerful leader. The carved tablets do not appear to bare the stylistic hallmarks associated with the artisans of the period around Alexander's death, and surely such a leader would have been buried with some trappings and finery, rather than poor looking renderings in relatively boring stones.

So, in summary then, we have a geographically unlikely location, and some relatively boring looking stone carvings, none of which add up to the idea of this tomb being that of Alexander the Great, or indeed any such figure. If either the burial or the items within it are of any value what so ever, the chances are that they were removed from an original site by grave robbers, and quietly sold to unscrupulous figures in the states, who later buried them for some reason, perhaps to keep them out of the hands of others of thier ilk, and forgotten after the holders death.

Either way, there seems to be no reason to attatch such vast importance to these objects, or any corpse found with them.

posted on Mar, 29 2013 @ 10:03 AM
link
My nose twitches when the word Bullion is mentioned...are any of these gold or silver?
The idea that anyone had them created out of precious metal then moved away seems kinda wierd....
Or are hey all made out of mississippi mud?