posted on Mar, 26 2013 @ 08:38 AM
link
My non-conspiratorial friend went on a youtube journey that lead him to this documentary (embedded below.) It is centered around a hot topic here on ATS—giants of the ancient world. It weaves together biblical anecdotes, megalithic structures, and yes, even jumps over to the UFO phenomenon by the end of the vid. I am not passing any judgment on the video or its subject matter, but I wanted to share it for those interested in this topic.

(Mods, did a search, couldn’t find it, you know the drill!)

I don’t know where this documentary comes from—if it was lifted from History Channel or one of those networks. I haven’t watched TV in many years, so please forgive me if this is a standard show found on any of those joke networks. I also apologize if this video has already been posted and discussed.

Now, before you jump to the video I’d like to introduce a mainstream fossil specimen that is exceptionally tall. This is just a starting point and it is my hope that other members will be able to expand on the fossil record in regard to ancient giants.

Discovered by Richard Leakey’s team in Kenya, the Turkana Boy is probably the tallest specimen of early human fossils. Turkana Boy was the most complete skeleton of Homo erectus ever found. He measured about 5’ 3” (160cm) at the time of his death, which was about 8-12 years of age. It is estimated that he would have grown to about 6 feet (185cm) or taller had he reached full maturity.
humanorigins.si.edu...

Now, Turkana boy was a different species than modern humans, so we can’t exactly expect them to be the same height. And 6 foot tall is hardly a giant. Furthermore, height in hominids is governed by a variety of genetic and environmental factors.

I am open to the idea of ancient giants. We all laughed at the idea of Hobbits until we discovered the very small ancient hominid species H. floresiensis with an average height of about 3’ 6” (106cm.)
humanorigins.si.edu...

Can you cite any fossil discoveries that point to ancient giants? If you are a supporter of the ancient giant theory, please explain why and provide your evidence (I’m looking for the physical evidence.) Granted, not all sources on this subject are going to be peer-reviewed and mainstream. I am mostly curious as to why people believe this theory. I am not eager to demonize anybody’s belief here, but the documentary left me with a lot of dead-ends and questions.

If you’re still with me—here’s what I really don’t get about the ancient giant theory. If there were fossil specimens, what would be the purpose for suppressing the discoveries? The cat is already out of the bag when it comes to fossil evidence, evolution, and human origins. Would there really be anything else to hide?

Hopefully it’s something new for you guys and gals.

Ask the Smithsonian Museum, they were in possession of the mummified remains of probably what the bible refers to as Nephilim sometime in the 1800s, allegedly they lost them!

posted on Mar, 26 2013 @ 10:00 AM
link
There are some pretty convincing arguments that point to a rather tall human people who left plenty of remnants behind. Ancient buildings also seem to be built to accommodate tall people. I dug up some info for you to check out:

Mainstream archeology is losing it's credibility. Tons of "unexplained" artifacts are turning up and the scientists just remain silent on the subject. Interestingly, most of the photos and public declarations for rather tall people were released prior to the 1960's.

posted on Mar, 26 2013 @ 10:31 AM
link
reply to post by NarcolepticBuddha
I have no doubts that "giants" once roamed the Earth. Back in the early 80s I had a boyfriend that was 6'11 1/2" tall. His shoe size was 17 EEE. There is no doubt in my mind that there had to be "giants" somewhere far back in his family tree. The genetics had to come from somewhere.

Originally posted by NarcolepticBuddha
reply to post by Invariance

The main reason they hide giant info....is that proof give truth to any stories and info sources about giants. And its not so much the giant thing it all the other stuff in the proximity. Take the book of Enoch. You prove giants then it makes the stories about the "sons of god" helping to educate men and women about how to live on the earth after the fall. Anyway its one of those things, giants, that open a can of worms for the "offical story" boys.
edit on 26-3-2013 by Logarock because: n


Are exceptionally tall people giants? or just an example of extreme range fostered by genetics and environmental factors?

Was his whole family just as tall?

It's like saying that a basketball team or a hockey team is a tribe of giants because they're all abnormally tall.

posted on Mar, 26 2013 @ 10:55 AM
link
reply to post by NarcolepticBuddha
They had a very large family and only he and one of his brothers were that tall (his brother was over 7'). I believe that some of the abnormally tall people we see nowadays have leftover genes that have become active. In the past of humanity there is some evidence that the average full grown man was around 5'5" tall at one point in history. We would consider that very short for a man today.

Angus Mòr MacAskill, frequently referred to as Giant MacAskill or Black Angus (1825 – August 8, 1863), was a Scottish-born Canadian giant, and was a "true" giant (a man of normal proportions, suffering no growth abnormalities). The 1981 Guinness Book of World Records posits Angus as the tallest "natural" giant in recorded history, as well as being the man with the largest chest measurements of any non-obese man (80 inches, or 2,000 mm).


Indeed, however... why all the evidence prior to a certain year?

It is no secret that academia have concealed discoveries. It is naive to think otherwise. We know for example that vikings were in America 500 years before Columbus, have the history books changed?

More to the point - who exactly were these giants that mainstream anthropology and archeology are ignoring? If researchers were able to prove an astounding number of details from the Epic of Gilgamesh including his burial site, why would the ancients have lied about how tall he was? Why would the stairs in the sunken city off the coast of Japan be so large?

garry-nelson.hubpages.com... shows a picture of a 47 inch human femur found in the 50's as well as a rather large jaw bone

www.wisconsinsickness.com... this link has a few listed places of finds in America

www.telegraph.co.uk... talks about a more recent Charles Bryne who was over 8 feet tall.

If people in more recent times can grow to 8 feet tall, why is it to far a leap to think there were a race of people 12 feet tall or more?


The Cape Breton GIant...the best example of a giant in documentation.

There are multiple accounts of giants in ancient lore. The Philistines are said by some to have been giants.

I hope this tread gets some action. I would enjoy reading it.

posted on Mar, 27 2013 @ 07:47 AM
link
My personal opinion is that all that stuff is in the basements and catacombs of the Smithsonian. I ran across this chart, I don't like that it doesn't site the findings but there is only so much room in a chart 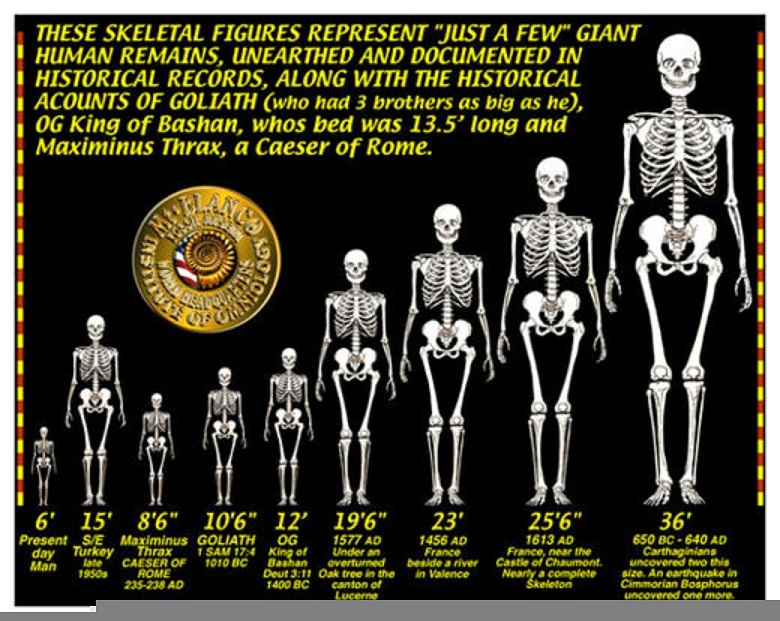