The new Pope and his mate, Baphomet

My friends attention was drawn to the statue behind the pope. He thought there was an image of a man in the art work just above the popes head.

My friend mentioned something about a 'deers head' in the upper portion of the picture.

I think he is wrong. To me, it looks more like the head of Baphomet than anything else. 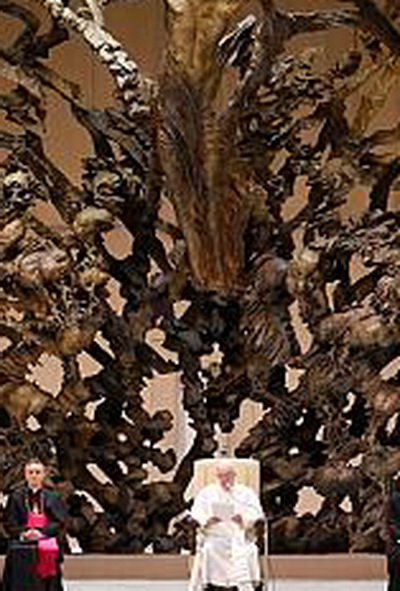 Here is a closer cropped image of Baphomets head and one horn.. can't have both, it would be too obvious. 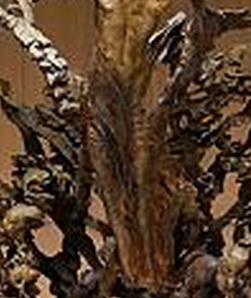 What else in the statue can we say is a hint towards the image of Baphomet?
Well let's have a look at the typical image of our dear 'friend'.. 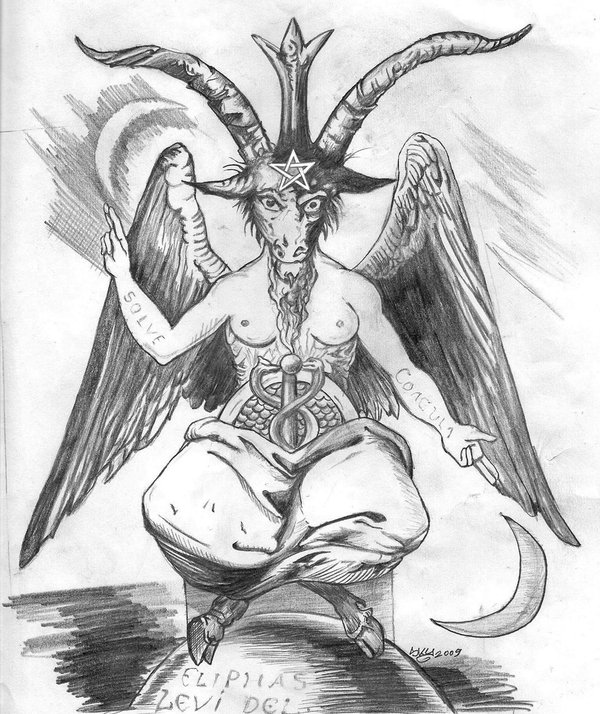 Take note of the three pronged piece on the top of Baphomets head between the horns.
Looks very much like it could be a crucified person, especially when you see it from the artists impression in this statue 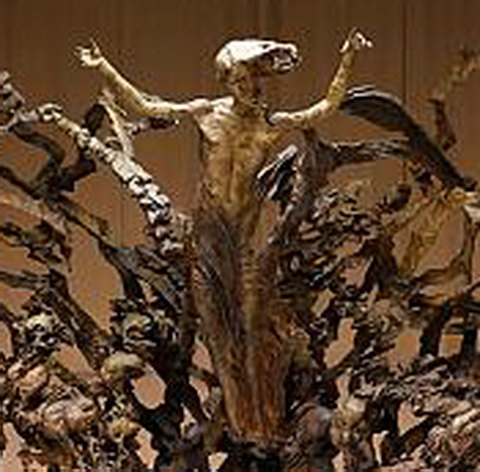 Baphomet (/ˈbæfɵmɛt/; from medieval Latin Baphometh, baffometi, Occitan Bafometz) is a supposed pagan deity (i.e., a product of Christian folklore concerning pagans), revived in the 19th century as a figure of occultism and Satanism. It first appeared in 11th and 12th century Latin and Provençal as a corruption of "Mahomet", the Latinisation of "Muhammad",[1] but later it appeared as a term for a pagan idol in trial transcripts of the Inquisition of the Knights Templar in the early 14th century. The name first came into popular English-speaking consciousness in the 19th century, with debate and speculation on the reasons for the suppression of the Templars.[2]

Since 1855, the name Baphomet has been associated with a "Sabbatic Goat" image drawn by Eliphas Lévi. It represents the duality of male and female, as well as Heaven and Hell or night and day signified by the raising of one arm and the downward gesture of the other. It can be taken in fact, to represent any of the major harmonious dichotomies of the cosmos. However, Baphomet has been connected with Satanism as well, primarily due to the adoption of its symbol by the Church of Satan.

don't you find it odd how the church suddenly wants a church for the poor when we are having all this financial trouble around the world where the poor are getting poorer and the rich apparently seem to be getting richer along with the church..


I don't know how accurate your friends assumption are, but I sure as hell find that background image nothing BUT disturbing!

Seems like it is statement of death over life, that's for certain......

posted on Mar, 17 2013 @ 05:39 PM
link
It seems like projecting what you want to believe.
As the son of an ex nun, I will wait to see what happens, as should we all.
Right now there is nothing to base the worth of this individual on, besides his past.
A past that is not horrible from what I've heard/ learned.
Let his actions speak, not conjecture.

posted on Mar, 17 2013 @ 05:47 PM
link
My friend found the image in a popular newspaper here in the UK (the Sun)
There is a report by the sculptor in the paper too but I cannot find a direct link to this article online in order to quote it.

I'm glad I'm not the only one seeing this now

what with this and a bunch of images in a cave...


Here is a closer cropped image of Baphomets head and one horn.. can't have both, it would be too obvious.

Originally posted by randomtangentsrme
It seems like projecting what you want to believe.
As the son of an ex nun, I will wait to see what happens, as should we all.
Right now there is nothing to base the worth of this individual on, besides his past.
A past that is not horrible from what I've heard/ learned.
Let his actions speak, not conjecture.

This thread is not directly pointing at the new pope.
It is about the statue behind him and the institution that calls itself a religion..
If there is a Baphomet link, as it appears to be fromthis image, then everyone has been barking up the wrong tree.

BlueAjah
+6 more
posted on Mar, 17 2013 @ 06:07 PM
link
This sculpture is very disturbing, especially its placement in the Vatican.

Consider the sculptor's description of what this is intended to be:


The Vatican commissioned Mr. Fazzini to provide a work for its modern auditorium. The result was ''The Resurrection,'' a statue depicting Jesus rising from a nuclear bomb crater.

''Suddenly there came to me the idea of Christ preaching peace for 2,000 years, and the place where He prayed for the last time: the olive grove of Gethsemane,'' said Mr. Fazzini in a book about the work. ''I had the idea of depicting Christ as if He were rising again from the explosion of this large olive grove, peaceful site of His last prayers. Christ rises from this crater torn open by a nuclear bomb; an atrocious explosion, a vortex of violence and energy.''

supposedly two severed hands were found in the wreckage of 9/11 footage with 'pointy finger' and there is, if i remember correctly, a de vinci painting of john the baptist with pointy finger also.


Thanks for posting!
It does indeed look like Baphomet, but the entire sculpture screams of chaos, so I guess he's going to bring about order. Yeah. That's it. This is going to be the great Pope who brings order out of chaos, a church for the poor, and I bet he's also going to section off a part of heaven for the poor, too.


Easy does, here, guys. All positions of power have their opposites. Perhaps, the sculpture IS exactly what you think it is, but not for the reasons you think it is. Baphomet (Baal) is the spirit of the Earth. It is what we must pass through to get to heaven, when we die. Because, we are buried there. It is only associated with death and trickery, because of historical events. But, to be enlightened is to know of redemption, renewal, and rebirth.

Man is made of Earth, as he is from it, but he is not limited to it. Humans seek higher ideals. We transcend earth. We are the dust of earth and return to the dust of earth, but we are life and our spirits rise above it. It speaks volumes of your ignorance that you cannot see or understand the more divine subtle meanings in images placed in front of your own eyes.

Perhaps, instead of criticizing, you should be exploring your own inner-selves to determine your ideals, your path in life, and your eventual outcome.

The sculpture to me (and I'm not catholic) is symbolic of mankinds' collective struggle out of the chaos of earthliness and our shared experiences as the attempts to discover the divinity of God's order.
edit on 17-3-2013 by sanitus because: content added.

and to add more speculation to the pile, it is said to be ...

The real reason I'm posting is to ask if anyone knows why satanist mark their territory. Does anyone know why? It seems like they would try to hide their faith since they're not so well received. Is there any biblical reason they do this?


If you're correct and it was intended to be Baphomet, then why has the Catholic church never mentioned him?
I went to Catholic Sunday School for 11 years and never once was he (actually it because it is both masculine and feminine) mentioned.

Bybyots
+26 more
posted on Mar, 17 2013 @ 06:31 PM
link
The sculpture in the throne room behind the Pope is called La Resurrezione ("The Resurrection") and it is by Italian artist, Pericle Fazzini. 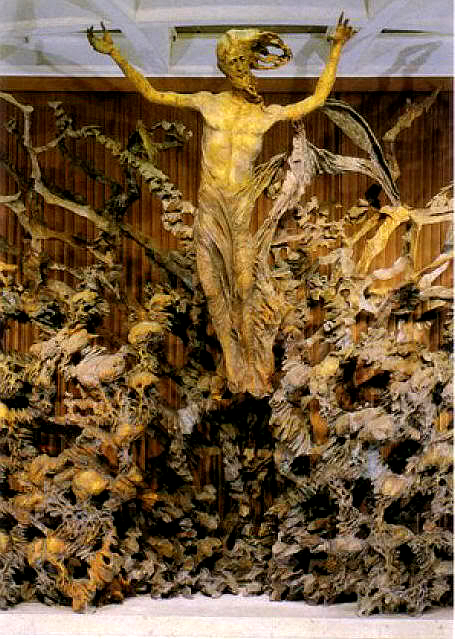 He began work on the thing in 1970 and finished it in 1977, just in time for Star Wars. He considered it to be his masterpiece, and if you can believe it, it's a bronze.

It looks to me as though it is very hard to get close enough to it to get any good detail images, it also just looks like it is plain hard to photograph.

It is also probably important to note that Fazzini had obvious surrealist influences, at least, and that is why people probably find a touch of the 'grotesque' in the work.

The thing is convoluted to the point that it should come as no surprise that it be as conducive to pareidolia as any assembly of clouds; in fact, more so, if one has some religious paranoia going on.

So, no, I don't see a 'Baphomet', and yes, I think way too much is being read in to the image.


The answer to why Satanists expose themselves is easy. Satan (or the Angel of Earth) is also one of God's beloved angels. He is just being punished for questioning God. He is still loved by God. And, God wants him to learn from his mistakes and mend his ways. So, just as God seeks Satan's growth, so too does Satan seek God's forgiveness. They are part of the same family of beings.

posted on Mar, 17 2013 @ 06:35 PM
link
I must be some kind of innocent because I've never seen this statue before, and it's been in the main papal hall for 34 years! Popes often sit there and are shown talking there. I've missed it, and thought at first the picture was photoshopped. The dragon head on top (supposedly "Jesus" with his flowing hair - the hair looks just like a dragon skull with it's mouth open), the weird shapes and symbols, this is for sure the oddest thing I've ever seen in the vatican - and it's been there for over three decades!