There is video at the link of this and the child did 3 somersaults in the air and landed on his feet. While wearing a superman t-shirt I have to add. This is an amazing story. He landed on sharp rocks. Had he not landed on his feet he might have been critically injured. If you do not believe in angels you might have to consider that thought again after watching this news story. He was also a blond haired blue eyed kid which makes me think of the indigo children I am always reading about on ATS.

Just an amazing story on an otherwise weird news day.


Thanks link is fixed.


The video does not show the child actually falling out of the window.

Secondly the child in question is wearing a Superman t-shirt in the interview but there is nothing to suggest that's what he was wearing when he fell.

Thirdly he didn't land on sharp rocks. It was gravel stones.

Either way it's quite remarkable as he could have fallen smack on his head.

Originally posted by endats01
He landed on sharp rocks. Had he not landed on his feet he might have been critically injured.


Those rocks are not sharp, and they probably the reason why he didn't suffer any damage, as they are loose rocks. If it was a cement slab he would have probably broken something in his legs or feet.

If you do not believe in angels you might have to consider that thought again after watching this news story.

He was also a blond haired blue eyed kid which makes me think of the indigo children I am always reading about on ATS.


To me his eyes look more green than blue.

Just an amazing story on an otherwise weird news day.


With that I agree.


This is exactly what is wrong with todays society.

“There had to have been angels watching over him,” Dylan’s grandmother Kelli Hayes said.

Why not accept that it is us that is doing these incredible feats, when it is this obvious?


Look again in the video at 35 seconds. Those are not smooth rocks in my opinion. I have fallen on these fill type rocks and they will cut your skin very easy.

Listen to the lady who witnessed the fall mention a blur of Red and Blue at 50 seconds into the clip. I think they had him put on the shirt he was wearing so it would add relevant context to the story being told. That is my opinion and what I am basing it on. Any way you look at it this was a very fortunate outcome for that family.

Pure luck. Lucky kid. I wonder how hell remember it.

Blond hair and blue eyes has to do with latitude. People in the far north and south do not need large amounts of melanin in their skin to protect them from UV. This is why they have blue eyes and blond hair. If you live on the equator, you need more melanin to protect yourself. It's basic biology and physics. In fact, I think this is sort of racist. And if I was an alien, I'd favor a midtone for international travel. So I'd want a darker complexion but not too dark. So if I wnated to find indigos I'd look in southeast asia or north africa or the mediterranean or the middle east.

Why assign to this magical hocus pocus? In my eyes, it's a freak accident. Thankfully, it ended well. And for the family, I have to be grateful that it's not worse news.
edit on 4-3-2013 by jonnywhite because: (no reason given)


I don’t see what the big deal is. The neighbor described a blue and red streak past her window, then we see the boy here: 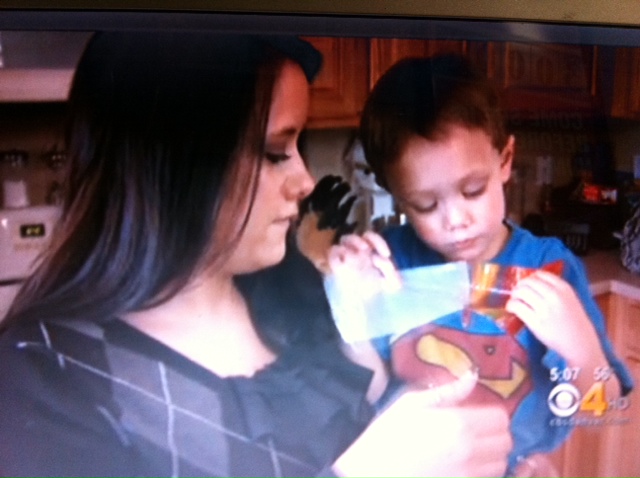 I think it’s pretty self explanatory.


Thank you SeaBag for making my point. I thought the point was obvious. I did not think I would be challenged on my conclusion in fact since as you say it is obvious from the frame grab you posted.

Originally posted by endats01
reply to post by seabag


Thank you SeaBag for making my point. I thought the point was obvious. I did not think I would be challenged on my conclusion in fact since as you say it is obvious from the frame grab you posted.


It was obvious right away....witness described a blue and red streak past the window...the kid landed on his feet from 3 stories with no injuries....THE SHIRT!

Obviously this is superman's son!

Originally posted by endats01
He was also a blond haired blue eyed kid which makes me think of the indigo children I am always reading about on ATS.

Anyone who tells you that a "special child" has to do with something so superficial and specifically related to characteristics common in one particular race is trying to sell you something.

There is no Master-Spiritual Race.

That said...glad the kid is okay.

P.S. Hey Angels, it's nice that you could save a child from a potential broken bone or two...but don't forget the thousands of children starving to death, being tortured as child-slaves, or worse.

You guys are seriously neglecting them.

That or you don't exist and it's all a matter of luck and circumstance.

The outcome was similar: he had a couple of scratches and a "neat raspberry" bruise on one arm. The doctors were amazed at his attitude about the whole thing, which (after some initial crying) was pretty much "weeee!"

I just asked him what he remembers about that day and he says he remembers being mad that grandma was leaving without him, and pushing on the screen. He also recalls hitting the wall (on the way down) a few times and "pretending to be asleep" in the ambulance.

I was at work at the time, about 12 miles away. Imagine THAT drive home if you can. I had no idea what the outcome was as my wife had called and screamed "Zach fell out the window!" as she dropped her phone and ran downstairs.

I think I lost about an inch of hairline that day, to be honest.


You have got to be pulling our leg. Your 4 year old son in Co Springs as well makes the same fall and is relatively unscathed as well? What is it with Co Springs and their flying 4 year olds?


No leg pulling here. I would have thought there would have been some safety screws installed in 3rd story apartments since 2005, but apparently not.

Glad he was okay!


Well I am glad that your 4 year old at the time was not seriously hurt either. It is not a common situation so the fact that 2 kids of the same age in the same city divided by some 7 or 8 years survived the same type of fall is perhaps at least miraculous. Still it makes me wonder about Colorado Springs. Got to visit there when all this gun control nonsense dies down.

I did drive through the area on my way some place else recently but did not stop. It was some crappy traffic in what was just about the middle of no where. No way around Colorado City for the way I was going so had to drive through and deal with the rush hour traffic I must have stepped in.


Nazi control freak mods delete my post without explanations. This is why I hate this site. Power mad coin operated spit bags that work without community oversight. Screw your malfeasance.