posted on Mar, 3 2013 @ 02:24 PM
link
Jennifer was introduced on this french show with the title "Cat eyed girl"
i wonder why they didnt choose this title for her --> "Reptilian eyed girl" ? lol 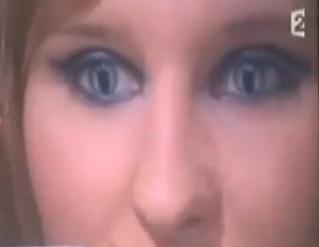 is it some Genetic Anomaly / Mutation ?
Real feline eyes / Real reptilian eyes ?
or some human evolution that take thousand of yrs to form in some people DNA ?

Here is the french show


Im curious to know how could someone get those incredible eyes like that
1 chance out of a billion ? or more then we could think have the same eyes has her

blue eyes in human was the first evolution / mutation sign
not to long ago .. people with blue eyes didnt exist on earth
maybe soon the new trend will be reptilian / cat eyes

Reptilian Hybrids of the Illuminati

Reptilians Walk Among Us ?

in the video above .. Notice how many times she slip her tongue out of her month
one YT user analysed all the camera angle and counted 13 times in 2 min
thats a lot of slip for someone

posted on Mar, 3 2013 @ 02:31 PM
link
She has Schmid-Fraccaro syndrome. I don't think you get any extra powers and more severe cases have other problems associated with it.

posted on Mar, 3 2013 @ 02:32 PM
link
i remember seeing this on here a year ot two ago
I think it turned out to be contact lenses ,although i reckon she would purr like a kitten if you rubbed her tummy

Originally posted by 12voltz
i remember seeing this on here a year ot two ago
I think it turned out to be contact lenses ,although i reckon she would purr like a kitten if you rubbed her tummy

What if her tummy is full of green scales ?

i tried to search if it was already posted but couldnt find any
i prefer the old search engine then this new samuru thing .. so white and flashy for the eyes
many people will stop using the search engine now because of that


green scales? now that would be an awkward situation . I keep thinking about that 'meet the parents ' movie when he told them that he used to milk cats , Worth a try on this foxy french feline ,non ?
edit on 3-3-2013 by 12voltz because: (no reason given)


This young woman most likely has what is known as (Cat eye syndrome).

posted on Mar, 3 2013 @ 03:29 PM
link
Would say its contact lenses.
People with cat eye syndrome tend to have other issues..(usually mental retardation). Also, people with CES don't have such perfect slits..its actually sort of gross (looks like a broken yoke in a egg more than cat slits). But, it could be in the end.

Evolution? Naa..we carry all sorts of animal codes within us...growing a bit of a tail, k-9 teeth, etc are not impossible..mutations from long dormant genes just popping out for mother nature to have a laugh now and then happen.

As far as it spreading..well, if 2 people with CES mate...chances are their offspring will be fine.,..its a rare and random disorder.

posted on Mar, 3 2013 @ 05:28 PM
link
reply to post by SaturnFX
I also tend to think that if real some long dormant gene is most likely the culprit. I'm sure there was a time in our ancient past when we would have needed eyes that could see better in the dark- to keep from being eaten by nocturnal predators. The elongated pupil reminds me of the eyes of a nocturnal creature.


Do you have a link to this being debunked/contact lenses?

I'm not surprised if it is just some genetic mutation considering the mass amount of toxic chemicals in our air, food, products..

I searched and found this
www.abovetopsecret.com...
and www.davidicke.com...


The french translation from the girl goes something like this
'Nothing really interesting is said at all really, the presenter is basically saying she has cat eyes (the don't mention reptilian eyes or lizard eyes), then he asks her how it has been for her growing up with those eyes and then she goes on talking about how she never had many friends and got bullied because of it, she talks about a few embarrassing situations where people just stare at her '

Nothing conclusive ,without using near perfect key words on samuru its pretty hard to find the original thread
edit on 4-3-2013 by 12voltz because: (no reason given)