posted on Mar, 1 2013 @ 11:48 PM
link
Surely there's more than 3, but pick your favorites. Explanations encouraged. Events that indicate 'design' and were most powerful in steering the national and/or worldwide system toward its current direction.

1. Formation of the US federal reserve.

At the time, the US economy was booming. The system itself was developed in secret meetings, and not unlike Obamacare, it was complex and forced through by votes of people who really didn't understand or want to understand it. It captialized on the theory that control of the economy meant control of the country (world).

2. Formation of the CIA.

Offshoot of the OSS, an organization that effectively reported to nobody. Presidents were even denied access to their secrets. Their policy included measures to eliminate evidence of their complicity in events that may hurt them in the future, so they were pretty much untouchable. An organization that has no bounds of prevarication and self-preservation. With significant federal funding, they realized they could develop infrastructure which was self-supporting (read "profitable"), which essentially minimized their dependency on funding to achieve their goals. NSA and DHS are essentially the CIA horse of a different color.

I agree with number 1

Edit: Actually I'll take it further back. The Khazar Warrior Clan deceiving the world into believing they were Jewish.
edit on 2-3-2013 by Mandrakerealmz because: (no reason given)

The Creation of the Universe ... Hey God is a Family Guy Ok!

Bill and Teds Excellent Adventure ... Think of it like a history of humanity ok!

And Finally The Matrix ... Where Ted becomes Neo and one can just access TED talks to learn how to do that ok!

Wonder what the current/next one will be? 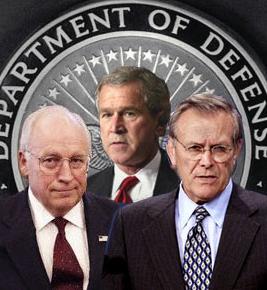 
How do you compare the Crusades that killed 5 million over 500 years to an atheist China and Russia that killed 150 million in 50 years?

How do you compare dropping the bomb on Japan to 10s of million died by their hands and Germany's? AND most likely prevented 10s of millions more if we did a ground invasion of Japan?

911 and the following wars? Small potatoes unless you are American. We didn't even blink at 4 million dying in Darfur...

posted on Mar, 2 2013 @ 12:38 AM
link
"We come to you, for consideration into the intergalactic community! We bring to you the process of human development!"
edit on 2-3-2013 by EverythinIrie because: (no reason given)

And Obama all by himself has taken everything they did and expanded it way beyond anything they did.... I don't remember in 2005 that the country was in dire straits it is today..

Originally posted by KamaSutra
We all pretty much already agree with 2/3 from the looks of it (Christianity's imperialism & Zionism's 9/11 false flag), right?

Wonder what the current/next one will be?

The next one is no doubt Disclosure....

posted on Mar, 2 2013 @ 12:44 AM
link
1) British Imperialism and Hegemony
2) Invention of Personal Computer - Jobs and Woz
3) Formation of Multi-National Corporations not bound by national laws

posted on Mar, 2 2013 @ 12:53 AM
link
Creation of the first superhero comics (the bible, koran, misc other religious txts)
First use of the lever
First telescope (what an eye opener that was for the world ^.^)

posted on Mar, 2 2013 @ 01:05 AM
link
ok here is my NWO come to pass, and this could happen, US pulls out of all nations due to cuts, A rouge Nation uses nukes, and lastly, a one world religion.
For the first one US pulls it self from all nations militarily, no foreign aid as well, for it is to broke and can not get any more loans IOUs.
The second one self explanatory.
The last one , this could be one of two ways, one Church belief or no belief or Church. only time will tell on this,..... no spoilers.

posted on Mar, 2 2013 @ 10:43 AM
link
The formation of mass agriculture, monetary economics, and social patriarchy.