Using new technology at the telescope and in laboratories, researchers have discovered an important pair of prebiotic molecules in interstellar space. The discoveries indicate that some basic chemicals that are key steps on the way to life may have formed on dusty ice grains floating between the stars.

This is some really cool stuff.

It's not 100% yet, but it is another step in the right direction I think.

The molecules believed to form the amino acids that make-up DNA have been found in a gas cloud near the center of the Milky Way. This discovery aside, being able to identify molecules on grains of ice 25,000 light years away is flat out amazing. Regardless of where you believe life originated.

Maybe it's just me, but I get excited about this type of thing.


Previously, scientists thought such processes took place in the very tenuous gas between the stars. The new discoveries, however, suggest that the chemical formation sequences for these molecules occurred not in gas, but on the surfaces of ice grains in interstellar space. "We need to do further experiments to better understand how these reactions work, but it could be that some of the first key steps toward biological chemicals occurred on tiny ice grains," Remijan said.


The Green Bank Telescope and some of the molecules it has discovered. 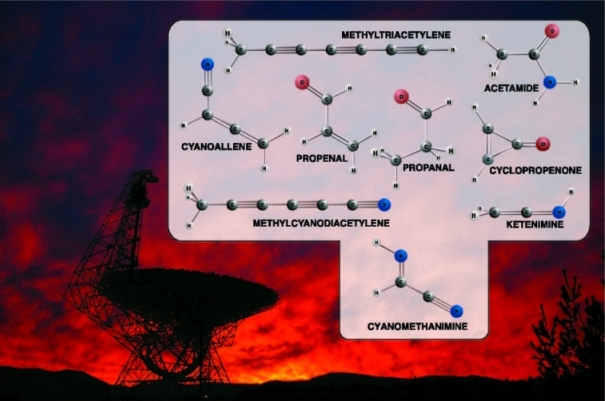 I think this also ties in well with this thread from about a year and a half ago. Building Blocks of DNA Found in Meteorites from Space by CeeRZ

Past research had revealed a range of building blocks of life in meteorites, such as the amino acids that make up proteins. Space rocks just like these may have been a vital source of the organic compounds that gave rise to life on Earth.

Were the meteors seeded by ice particles in the gas clouds?
Either way it's very interesting stuff and things.


Don't hurt yourself trying to add something that requires thought.

posted on Mar, 3 2013 @ 03:20 PM
link
That is fantastic! I know some people don't think it's wise or fair (from a certain social point of view) to spend money with this kind of research. But wow. Every time something like that pops up (and they are popping up more frequently), I have this goosebumps. I'm certain that pretty soon we will hear from the mainstream science "We found life out there". I don't care if it's some kind of bacteria, it's going to be amazing.

I missed that somehow.