Scientists have been left baffled after dozens of Manta Rays washed up on a beach. The 'mass stranding' happened in Gaza City, where none of the fish had been washed ashore in six years. The bloodied corpses of 220 Rays were recovered and taken off to a local fish market. Weighing more than 12 stone each, they sell for around £1, according to reports. Experts have been unable to explain why the Rays were washed ashore but have speculated that they were either hit by a passing boat or left disorientated by underwater noises or electrical signals. 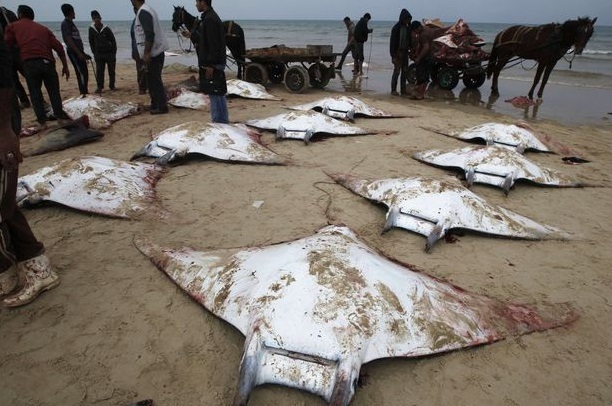 Okay so last week was ' Dozens of Sea Creatures washing up in Peru ' and now Manta Rays are washing up in Gaza. Could the two be connected somehow? Or is this just coincidence?

It did'nt show up when I searched.

Dozens of Mobula Ray fish were mysteriously washed up on the beach in Gaza City today and carted off to market by Palestinian fishermen.

Bob Rubin, of Santa Rosa Junior College in California, is one of the world's leading expert on Rays, and spoke to MailOnline about the find in Gaza. He said: ‘Mobulas often travel in huge schools of thousands of animals and also leap from the water and twist in the air. Very cool indeed. 'This observation is strange to me and unknown to me as well. I have worked in the Gulf of California for many years where there are abundant mobula schools and I have never seen a "mass stranding". ‘These animals seem to have blood on the "wings" - pectoral fins - which may have come from slapping something - boats, rocks, sand, each other?’ He added that without seeing the fish and looking further into other possible causes such as their stomach contents and condition of their gills, he could not determine what might have caused the stranding. ‘Large underwater noises or electrical signals may have caused some state of disorientation but that is only a guess on my part,’ Mr Rubin said.

So they're now off to be sold. Is that safe? Shouldn't they be tested or something first?
edit on 28/2/2013 by SilentE because: (no reason given)