Should Front Handguards Be Banned On Rifles? 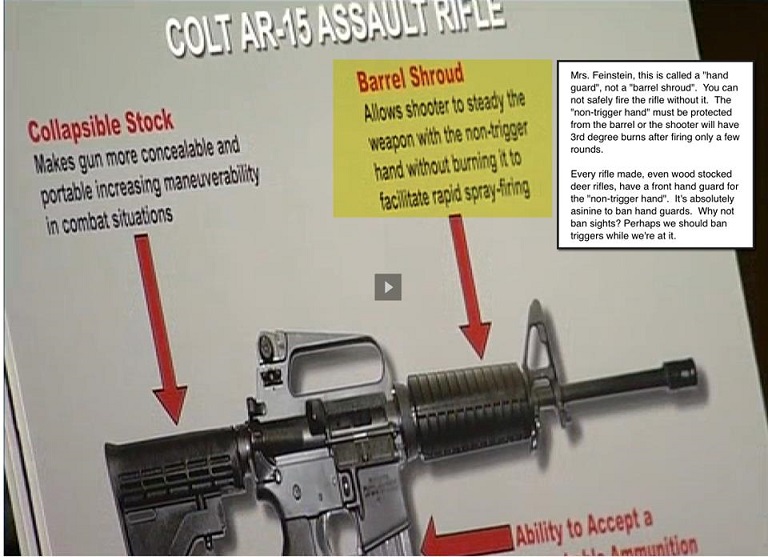 Apparently, front handguards (I guess which are the exact same thing to Feinstein) automatically turn rifles in to manic killing machines. The picture is what Feinstein showed in her opening remarks in todays hearing. (It's about 8:20 into the video below).

....If you havent noticed by now, she's labeled the front handguard as a barrel shroud....and yes, those are 2 completely different things.

Well, going by Feinstein logic, the barrel shroud in the picture "Allows shooter to steady the weapon with the non-trigger hand without burning it to facilitate rapid spray-firing."

This lady is getting more and more ridiculous every day. Just a couple other things that makes me think she has no idea what she's talking about....

All semiautomatic rifles that can accept a detachable magazine and have at least one military feature:

Some of these "military features" listed are just ludacris. Lets see....grenade launchers (already banned). Rocket launchers.....I have never heard of someone using a rocket launcher mounted to a rifle in any crime here. How would you even attatch an RPG to and AR 15? A second pistol grip on a pistol? (yea, those are already banned to).

So.....do you believe front handguards cause any rifles automatically become an "assault rifle"? Should they be banned?

posted on Feb, 27 2013 @ 11:52 PM
link
I guess we will have to ban leather gloves next because how hard will it be to wear a leather glove on the hand that is holding the barrel to keep the hand from getting burned when the barrel heats up due to all that " rapid fire spraying"

she`s a paranoid know nothing idiot


I really wouldnt be suprised if she tried to do something like that.

I hate to disagree...but she isn't entirely wrong about what is available. It's simply a question of which state you live in to be able to own and use what item. That is what puts a bee in her bonnet, so to speak. She can't STAND the idea that people have more freedom and perhaps like it that way, than her precious California. 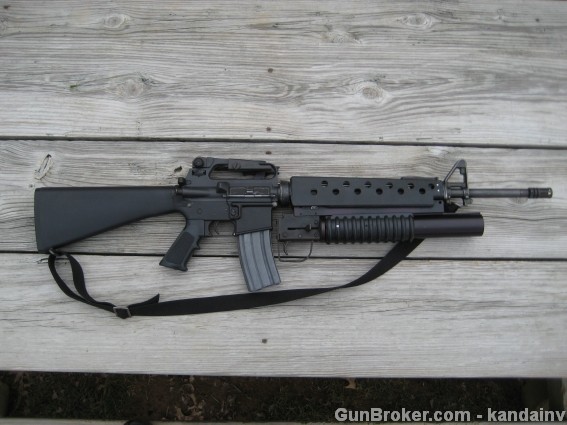 Included with this rifle is the Cobray M203 style 37mm 15" under barrel flare launcher. The correct hand guard and rear grenade sight is included. Unfortunately, I do not have the front grenade sight. This can be found for about $40.

That is the comment made on the grenade launcher or..ahem.. yeah.. flare launcher. That's right.

There is also a guy they did a special on here a couple years back who, at that time anyway, had a range with special weapons available to use in Arkansas. I distinctly recall seeing a mortar in that local news report. It was surprising, even by Midwest standards...but then, with the right permit, you can have an M-2 Heavy Machine gun too... Last one I saw was running out about $40,000 on auction.

Originally posted by buni11687
reply to post by Tardacus


I really wouldnt be suprised if she tried to do something like that.


The trick is to make the gullible think that these are the features of a full-automatic--and thus some sort of military assault weapon. Not a difficult trick at all, as there are millions of gun-grabber wannabes who don't know the difference....


Included with this rifle is the Cobray M203 style 37mm 15" under barrel flare launcher.

There is also a guy they did a special on here a couple years back who, at that time anyway, had a range with special weapons available to use in Arkansas. I distinctly recall seeing a mortar in that local news report. It was surprising, even by Midwest standards...but then, with the right permit, you can have an M-2 Heavy Machine gun too... Last one I saw was running out about $40,000 on auction.

I believe you can get pretty much anything, from high explosives to tanks, but you will need a special permit to do so, plus tons and tons of cash. (Good luck to us average Joes with getting one of those).

www.americanspecialtyammo.com... source for rounds from flares to blanks to full on beehive rounds(more or less) if your willing to get the permits for them

www.americanspecialtyammo.com... and their HUGE legal disclamer you have to read and sign before you can buy one

www.americanspecialtyammo.com... this is the stuff you need to have it registred as a DD to buy and posess if you dont wanna do federal time
and no i dont work for them but i do enjoy their product

I like that last link. It looked all fun and games until the end... Rubber balls look downright interesting to make a 'Beehive' as they put it (Pop a burglar with that first and the real trigger has 30 real rounds if that doesn't drop them, without killing them), but what is below that is the doozy.

Now, keep in mind that I'm extremely pro 2nd and have no problem with much of this being legal around where I live. That last one is Flechettes to make rounds with. That would really hurt, eh?

Hmmm.... I'm thinking of what legitimate use there could be for flechette rounds and what comes immediately to mind is what has become pretty big in many states. Hog hunting. That would be a one shot deal but a real useful one, if 1 shot, close and with absolute results was what the moment called for.


yeah if i had more time and money id get mine serialized and give that stuff a shot but the fact you have to pay a tax stamp for each ROUND (200 i think?) its a bit out of my budget (and where the hell would i use them?)

would not the flechetts tear up the meat of the hog to much?(i know they are pests but i still like to see meat used when something is killed)you would think it would shred most of the body,and on the rubber rounds one yeah that would be one hell of a riot gun dispite only holding one round at a time but with permits imagine it being full of tripple aught buck......lol or the largest slug this side of a PUNT gun

www.youtube.com...
video of a 40mm flichette round(couldnt find a 37mm example)
edit on 28-2-2013 by RalagaNarHallas because: (no reason given)

and a video of items mrs finestine would most likely call "assault shot gun shells" www.youtube.com...
edit on 28-2-2013 by RalagaNarHallas because: (no reason given)

posted on Feb, 28 2013 @ 05:49 AM
link
I have a question, and basically it came up in conversation the other day over 2nd amendment topics.
When the 2nd amendment was recognized, created and enacted, the ARMS that we had the right to bear were the SAME arms that the citizenry used as a militia / armed services used, correct?
IF I was alive at that time, I had access to and the right to bear, the exact same weaponry in my home and private life as I did in an engaged military application?
Am I correct?

posted on Feb, 28 2013 @ 03:03 PM
link
yes that is correct in the federalist papers(not sure which one off hand) it talks about how each militia member was supposed to own his own military type weapon and at least enough powder/lead for 24 shots and anything past that they would be issued from the war department as well as official uniforms i believe

Thank you,
which circles back around to my position in the discussion the other day in which I shared the point that we, the citizens, have actually NOT kept up in our ownership of shared purpose arms, and that the focus should be on a more active arms education / participation program, where increased responsibility is recognized through broader gun ownership, not less and more restrictive, and keeping our arms responsibly secure and not accessible to those with mental illness, (sadly they do and will continue to exist) . Every incident has the common denominator of mental illness and accessible arms.
Those 2 points can be addressed, the need, the condition, the catalyst, is found within those 2 factors.