posted on Feb, 27 2013 @ 05:54 PM
link
We will be discussing if chemtrails are real or not forever, with those planes flying so high that all we can do is look at the sky and curse. What would you do if one day the planes fly so close that you can see the poison coming down right on top of your children? 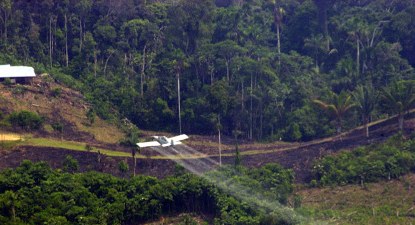 Ana is a 7 year old girl who lives in the mountains of Colombia and whose life is spent in the presence of the armed conflict, which, despite constantly transformed, remained pervasive for more than half a century in the remote rural areas of Colombia.

However, thanks to the policies of the Colombian government, Ana, during the last week, have been fed very well, like all the inhabitants of the Virgencita, has eaten to satiety banana, maize, cassava, chickens and even a pig shared with the community. These are days of abundance that portend looming famine. The reason for this ephemeral abundance, is that you know that soon arrived aerial spraying program to eradicate the illicit cultivation of the Colombian government, sponsored by the United States.

If you have kids, you'll be mad after reading this part (that pic broke my heart) : 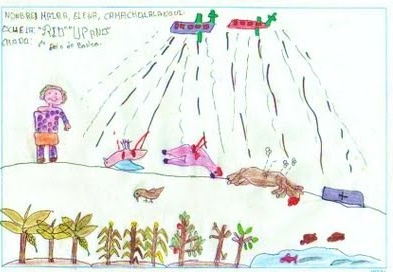 Ana and her neighbors should eat all they have, because spraying has finished with the coca, but also kill all other crops, hens, chickens, pigs and any possible power, likewise, poison water sources and all biodiversity. Furthermore, these fumigations strongly affect health, especially for children and elderly. Ana recalls that the last spraying his brother nearly died of diarrhea and vomiting, she had a bad cough for several weeks.

I didn't translated all the story, I believe that was enough information to touch your hearts. Now let me present to you another case. 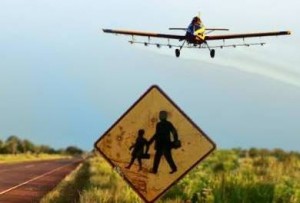 She is 14, but Andrea's adolescence is not equal to that of other children playing in the park. A victim of epidermolysis bullosa, a disease that causes blisters and sores on the skin. Her condition doesn't let her play with other young people in his neighborhood.

Near her house lives Omar, 36, and, with a body completely shrunk. Despite his age, he spends most of his days in his mother's arms, his great protector. A woman who has seen his son having severe problems for a normal life.

When he was born the doctors diagnosed cerebral palsy. He can't walk, communicate, he wouldn't be able to survive on its own.

From his bed crying sounds like the little Lucas, a child of only two years. Suffers ichthyosis, a genetic disorder that dries the skin and making it real fish scales.

Three stories that share the same place, Argentina. A country that has seen it grow, as their crops, diseases and cases of malformations in newborn infants. 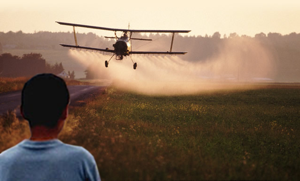 I didn't check if these stories had been posted already, I don't care. One last thing : Monsanto : GO TO HELL.

posted on Feb, 27 2013 @ 06:22 PM
link
When they hear the plane coming they should put the animals in a shed or barn and run to the house.Staying in the house with a rag over your face when the plane is spraying might not be perfect but it`s better than standing outside directly under the plane like the retarded kid in that picture is doing.

If they are living so close to the fields where drug crops are being grown then maybe they are the ones growing them?

Originally posted by Tardacus
When they hear the plane coming they should put the animals in a shed or barn and run to the house.Staying in the house with a rag over your face when the plane is spraying might not be perfect but it`s better than standing outside directly under the plane like the retarded kid in that picture is doing.

If they are living so close to the fields where drug crops are being grown then maybe they are the ones growing them?


I don't care who's growing what, no land should be doused with toxic chemicals for any purpose. That worked out REALLY well for us in Vietnam, didn't it? All these years later, still rife with health problems over there. What are these villagers down south looking at in the future? Just as many health problems over the generations?

Drug eradication or not, no one deserves their land & health ruined as collateral


Let me translate for you another part of Ana's story, seems like you need more clues :

Therefore, the daily life of Ana and her family moves between bullets and abuses of the various armed groups in the conflict, to the point of forcing them, rifle in hand, to plant coca and being members of the various "armies". This has led to all the inhabitants of the small village, La Madonna, besides living in fear, to suffer immense poverty and shortages, almost constant food.

Originally posted by Trueman
reply to post by Tardacus


Let me translate for you another part of Ana's story, seems like you need more clues :

Therefore, the daily life of Ana and her family moves between bullets and abuses of the various armed groups in the conflict, to the point of forcing them, rifle in hand, to plant coca and being members of the various "armies". This has led to all the inhabitants of the small village, La Madonna, besides living in fear, to suffer immense poverty and shortages, almost constant food.


It sounds like thay are stuck between a rock and a hard place, I reckon they should just up and move in the middle of the night.

posted on Feb, 28 2013 @ 02:47 AM
link
I just received a message from another member, telling me one of the links I provided was 404ed. Both links are working for me. I wonder if other members had that problem too.

You’re sick. Your nose is stuffy. Your body aches, You’re sweaty, coughing, sneezing and you don’t have enough energy to get out of bed.
It’s not the flu. It’s a conspiracy, according to Dr. Len Horowitz. His opinion is not based on conspiracy theory but on conspiracy fact.

Over the past 10 years, Horowitz has become America’s most controversial medical authority. A university-trained medical researcher, Horowitz, 48, charges that elements of the United States government are conspiring with major pharmaceutical companies to make large segments of the population sick.

The mainstream media is reporting that hospital emergency rooms are jammed with patients suffering from a bizarre upper respiratory infection that doesn’t quite seem like a virus. They are reporting that it’s a “mystery” flu and that the flu vaccines are ineffective against it.

“That’s all hogwash, bogus nonsense”, says Dr. Leonard Horowitz. “The fact of the matter is, we have seen this type of an epidemic since the end of 1998 and the beginning of 1999. People have been hacking and coughing with this bizarre illness that does not seem to follow any logical viral or bacterial onset and transition period.

If it was a really bacterial or a viral infection, it would have caused a fever but it didn’t. It lasts for weeks, if not months. Sinus congestion, sinus drainage, cough, fatigue, general malaise. People have been feeling “off”.


“I believe the chemtrails are responsible for a chemical intoxication of the public, which would then cause a general immune suppression, low grade to high grade, depending on exposure. The immune dysfunction allows people to become susceptible to opportunistic infections, such as this micoplasma and other opportunistic infections”, says Dr. Horowitz.

I am a complimentery health practitioner, and I have always believed that the chemtrails are affecting our health. I am an avid gardener, and that's where I started seeing the difference about 3 years ago.
As soon as I see the trails, I give it 2 hours max, then I get indoors.

Rainbows
Jane
edit on 28-2-2013 by angelchemuel because: (no reason given)


Sorry for being what may appear pedantic here but i am confused. As far as i can make out, this relates to crop dusting? As in spraying the crops for agricultural purposes? As opposed to chemtrails which are high altitude spraying of the population for whatever nefarious reason you wish to believe? (dumbing down, killing off, whatever).

Obviously, it is still sad that people are adversely affected by such things but if it is simply crop dusting then that is completely different to chemtrailing.


If you see contrails/chemtrails, they are not going to bother you. They are way up in the air. Like 25 thousand feet or more. By the time they come to the ground they will be 2-3 hundred miles away depending on the speed of the jet stream. You should be worried about the ones that you cannot see. (If you fear clouds) the ones that are 2-3 hundred miles west of you.

If you are truly a health professional, you should be able to document localized outbreaks of terrible sickness due to chemtrails. Meaning, everyone in one general area would be sick. If that isn't the case, maybe it's just cold and flu season.


The topic of chemtrails is so muddy already, please don't stir it up more by introducing crop dusting to the definition.
That is doing way more harm than good.

Ad for your OP, it's terrible and obviously the one's doing the spraying are not concerned for the welfare of the locals. There is no such thing as acceptable losses. Only death. I agree it should be stopped.


For me, chemtrails and this are the same thing, doesn't matter how high the planes are. It's just throwing poison on top of the people.


Then I suppose when I let a quiet one rip while walking past my buddy (crop dusting) is actually chemtrails.
I feel so dirty.


Chemtrails or not, when you let a quiet one rip while walking past your buddy it is just plain wrong not to afford him a thunderous advance warning of the noxious fumes about to embrace his nostrils.

Originally posted by network dude
reply to post by Trueman


Then I suppose when I let a quiet one rip while walking past my buddy (crop dusting) is actually chemtrails.
I feel so dirty.

recent study conducted by a German university found very high concentrations of Glyphosate, a carcinogenic chemical found in herbicides like Monsanto’s Roundup, in all urine samples tested. The amount of glyphosate found in the urine was staggering, with each sample containing concentrations at 5 to 20-fold the limit established for drinking water. This is just one more piece of evidence that herbicides are, at the very least, being sprayed out of control. - See more at: naturalsociety.com...


I would bet you might get angry at me if we were mates. As long as it's funny to me, it's all good. And just thinking of the term "crop dusting" in that context makes me giggle. I am 43 going on 2, but damn it's a fun ride.