COUPONS: An index of impending collapse? 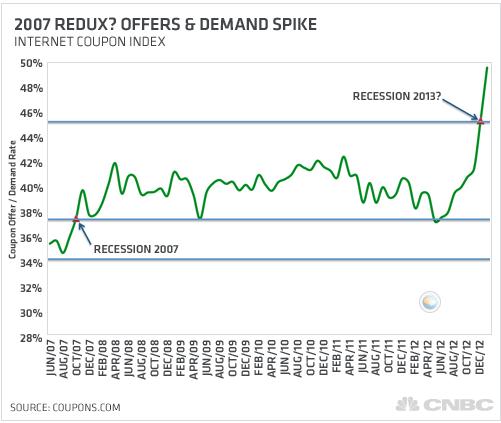 Why Consumers May Be On Crash Course

Consumers are clipping coupons at a rate not seen since before the 2007 recession, and that's a troubling sign, according to Coupons.com CEO Steven Boal.

The website tracks how often people view and print coupons and their redemption rate. Right now, Coupon.com's Internet Coupon Index, as it's called, shows a spike in coupon offers and demand.

This pattern is almost identical to the one that played out right before the last major economic downturn. The higher the index value, the more consumers are under economic pressure, Boal told CNBC.com.


I'd say the pattern is worse.

More evidence that what we see doesn't match what the talking heads say.

Take for example this quote found in the same article:

But not everyone believes the consumer is getting overly stressed.

Yup....looks like a reasonable interpretation to me of consumer coupon behavior.


Coupons can make the difference in how well you are feeding your Family, that is for sure. I'm lucky, I don't have any children I have to shop for at home anymore. But, I do use coupons when I shop...everything has gone up so high in shopping, one would have to not have a care in the world, to not realize the benefits of using them.

I can't remember the last time I was in line at a grocery store, and didn't see other people using them.


Funny thing how now many cashiers seem surprised when I don't produce coupons after a grocery purchase.

In fact, a similar experience just the other day led me to hone in on this article.

That incline over the last quarter of 2012 looks spooky as hell, if you ask me.

posted on Feb, 25 2013 @ 03:47 PM
link
anecdotally.. ten years ago when I used coupons folks would get huffy behind me in the line/que
Now, they all seem to use them.. that said I would never shop at a regular grocery store.. cooperatives farmers markets and even farmers themselves are open to barter and are better ways to get good food..

Please examine the video above, for proof as to why this chart might be VERY inaccurate in regards to the recession

"It's better than sex" says the first one.


Yeah but there's using coupons and !!!USING COUPONS!!! The last time I visited my parents they were watching this show...Coupon Kings or something like that. The guy left the store with 280$ more than when he came in and got delivered to him a semi trailer of toilet paper. Now, the guy didn't spend a dime and got all that crap? No pun intended. Now we can truly see we live in a world on monopoly money.
edit on 25-2-2013 by XLR8R because: (no reason given)


Does that chart factor in the popularity of certain shows that show how people get massive savings using coupons?
Unless it factors that in I would not consider it an accurate chart.

posted on Feb, 25 2013 @ 04:04 PM
link
I have used coupons and matched ads for years, I have little ones and it saves me about half on my groceries. People used to get irritated cashiers and shoppers alike, now we swap ads and unused coupons every time I go. I look at the lines and at least half the people have ads with them and coupons. The culture has changed with the shows, the economy sucks, and prices are much higher. Anyone who has not tried coupon.com should lots of good coupons.


That's an interesting point, which I considered. Maybe consumers are just hearing this more and falling in line.

But my own anecdotal experience says otherwise.


From my experience I know that I've done the coupon clipping thing because of the TLC show.
And I know of several others that also clip now and get some crazy deals because of the show as well.

So I'm sure that the explosive growth in coupon use can be attributed to that show. And also to news outlets commenting about the show and showing other locals doing their coupon magic.

I'd also take a look on the number of websites that have popped up recently that deal with couponing. If the amount of sites that were created after the airing of the show explosive growth. We could correlate the show being influential.


Of course we’re heading for another recession…even worse than the last.

Tax & Spend is going to get us there sooner rather than later. We’ve had years of increased (dramatically increased) spending, now the taxes have arrived and they will also grow. People are hurting and no policy in the works now is going to change this pattern. In fact, the policies in play now are going to speed up the inevitable.


My mom is a coupon nut. She has used them ever since I was a kid.
I am amazed sometimes at how much she saves. Double this, triple that.

She even has them all filed according to types.

The type of bargain shopping I do is the whole "buy one get one free" or the "2 for $5" or "2 for $4." I check the weekly ad for both local groceries shops and shop accordingly based on what is on sale. They always have meat esp chicken bogo and I cook A LOT of chicken so it's worth it for me to buy chicken only when it's on sale. I only buy cheese and snack crackers when they are on sale for one of the deals mentioned above. I save a lot of money that way. My fiancee lives overseas where he can't get any of the foods I can get here so these sales help when I send him care packages esp the bogo free sales.

Most of the coupons I come across are for more than one of the item and it's only 50cents or something that I don't see as beneficial or a deal. I find it to be a better deal when it's either BOGO or one of the other sales I mentioned, to me that is how i save the most money.

We buy all of our paper type products in bulk online and it saves quite a bit of money that way buying in bulk vs buying in the store.

posted on Feb, 27 2013 @ 11:07 AM
link
I don't think the chart rise is due to extreme couponing shows. Those shows have been on television since 2009-2010 and I am sure everybody did not start watching them suddenly at the end of 2012 for no apparent reason. Takes a little logic. Also, extreme coupon savings have been represented on shows like 20/20 all the way back since the early 2000's and maybe late 90's, so it isn't some kind of new trend that is on the upswing, it has been around for a long time.

Now, as for the couponing itself - I just don't get it. I have attempted it myself but I don't understand what I am doing wrong. I experimented with it for a good 6 months, finding all possible coupons I could and came up with the following results:

1. The coupons I received were never for products I actually needed or used. There were numerous times I could have got like 10 packs of dental floss and other hygiene items for free, but hell, what is the point? I went in to save money on food an necessary living supplies.

2. How these people get "double" and "triple" coupons is beyond me. Out of probably 50 checked grocery stores in my area within a 50 mile radius, only 1 - count it- ONE offered double coupons. No triple, just double. To make up for it, the prices in the store are probably 15%-20% higher than all the other stores. And that also depending on the coupon and whether it says-

3. "No doubling or tripling this coupon." I have received countless coupons that says this or something like this in the fine print and the store that doubles coupons won't even double them. Either that or the coupon is only "Good for one item only." and the most common "Limit one coupon per customer."

4. Lastly, there are lots of stores that do not accept "printed coupons" from the Internet. This is where a lot of the good deals actually come from and *poof* it is out of the window.

I watch these coupon shows and I see these people pick up 200 bottles of Gatorade and they offer the cashier one "super coupon" or a handful of the same coupons - and in the real world it doesn't exist. I'd like to know one actually person that has done it to the level of the people on these shows and until I have some kind of testimonial I will consider it a scam. The reality of it doesn't even make sense.

As for the spike in 2012, I'm wondering if it has to do with the rise in mobile Apps coupons. These are the ones you can clip on your phone or computer. For places like Safeway, you can't get most sale prices without clipping an electronic coupon.

Walgreens recently tied their sale prices to their shopper card, so I'm wondering if that's considered a coupon?

In that case, it's not really a spike in coupon usage but just a change in how stores work.

posted on Feb, 27 2013 @ 12:43 PM
link
I found that almost all the coupons are for crap food that is not good for you. Every time I try couponing I come that same conclusion. I take advantage of the $5 off my whole order type of thing and sales, but couponing hasn't served as a good investment of my time.

Every coupon site I have visited on the internet ended up leaving some kind of virus on my computer.

Four or five years ago, there would be a lot of coupon clipping at our house. Maybe I wouldn't buy all the products I clipped, but the selection was there.

Now, sometimes I on;y clip one...or none per week.
And, those I do clip are often for smaller discounts.
The foods I use don't have coupons often anymore.

It's mostly for new products, often not in stores yet.... and highly processed foods...or highly processed pet foods/treats.
Stuff with lots of crappy vegetable oil and lots of salt and/or breading/carbs.

The only time there's lots to clip is for holidays...guess people spend more then

What next? Survivor... On coupon island...

Originally posted by magma
reply to post by Daughter2

What next? Survivor... On coupon island...


Yeah, no kidding eh. You can watch wally middle aged Christian man buy out every box of cereal a big store has, then stuff every orifice in his home with em then pile em in the parking lot 12 cases deep by 16 and have the church come over and pick it all up for a donation to the members, all this after giving 100 cases to the food bank.

Four months of running coupons through the till, and $1.14 later, he got home only to find out he was out of milk.

Reality TV at its finest.

Personally myself I like the kooby from sobeys on a BOGO event.
edit on 2-3-2013 by lnfideI because: (no reason given)

posted on Mar, 10 2013 @ 06:54 AM
link
Ah yes. Coupons.
Big buisinesses way of telling us that they over-price the cr$p they sell us, but that if we buy it anyway, then they will reward us with the incentive to purchase even more of the afore-mentioned overpriced cr$p.