gibberish with excitement i went digging a bit more...


it turns out that its a pyramid tomb


so its not exactly a pyramid as such. but still, it had me all giddy for a while.
here's a link to the website i found it on

posted on Feb, 24 2013 @ 05:45 PM
link
When you say 'pyramid found' I was expecting some new big discovery but seems it's just 'found' by you, and now me, on the internet.
Very interesting, good find. Gonna look up the 'Hell-Fire' club now!

A long time ago i was taken by some friends (on a dark stormy night) to see 'something crazy' close to where I used to live... 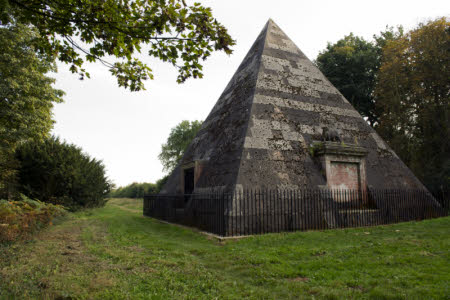 The Blickling Pyramid in Norfolk, UK

On the side of it there is a a window and you can see the tombs inside it, as a youngster it totally blew my mind

I must try and find that wee place next time im down that way it looks lovely, thank you

posted on Feb, 24 2013 @ 06:46 PM
link
I used to live in a pyramid!
For those interested look up 366 chambers flat road, Marsden, Queensland, Australia in google maps.
I had some very interesting experiences there!

posted on Feb, 24 2013 @ 06:48 PM
link
samuel1990 What kind of interesting experiences? Paranormal-spiritual? Even though the building was modern?

on an irish note,have you read up on the towers,some interesting reading,sorry specifics just lept out of my head,radio towers linked with astral alignment and paramagnetics.well worth a google


Well it was built in the 70's and was a type of commune. Vacant for quite some time until we moved it. Honestly, I'd say more paranormal experiences rather that spiritual.
The room I was sleeping in previously had someone die in it so that added a creepy factor to it! A lot of weird bumps in the night and I recall one morning we woke up to all the doors and cupboards open. The night before I'd closed my bedroom door, same as my housemate, and all kitchen cupboards and linen closets were shut. Awoke to find every single one open and a scared and crying housemate!
But in saying that- we had a ton of egyptian relics and ornaments about the place as we were embracing the spiritualness of the pyramid.

We were both very new age spiritual types (there were dams there and I can honestly say I've seen orbs of light come out of them and go into the sky) and embraced all the crazy things that went on.
We were also convinced there was an underground basement hidden beneath the floorboards but never got the time to check (it was rented and we didn't want to ruin the floor)

I might start a thread showing pics of outside and inside and tell my story : )

Within the walls of the adjoining church lie inserted the remains of Mrs Dorothea Howard, otherwise Hasells, relict of John Howard, Esq., who departed this life at Shelton in December 1684 to whose memory and that of their descendants and as a place of burial for his family, Ralph, Viscount Wicklow, has caused this monument to be erected in year of Our Lord 1785

Found a ghost tale apparently about Frances Parnell who died 10th August 1814 and was the 11th and final body placed in the Howard Monument.


A rather sad story told about this graveyard is *that a tragedy involving a junior member of the Howard family a two year old child smothered in its cot in England. The little casket it is believed was returned to Old Kilbride and put in the monument. Shortly after the residents, of the area were troubled, to hear a baby crying at night. This persisted over many weeks until the casket was taken and re-interred at New Kilbride,. It is said the weeping ceased. And this is the reason given that the Howards stopped using the vault.

posted on Feb, 25 2013 @ 04:16 PM
link
thanks for all the replies folks
my heart did skip a beat when i came across this for the first time
too good to be true for sure, but still a nice little find


samuel i typed in those coords and couldnt see anything except bush and a driveway that leads to bush, and also a vacant property, is there any other way you can show wha it looked like?

posted on Feb, 26 2013 @ 12:06 AM
link
Freemasons seems to like to be buried in pyramids.
Charles Taze Russels founder of the Jehovah's witness had a similar tomb. 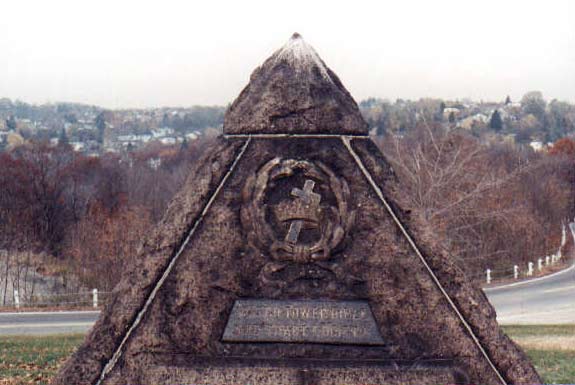 
It's just up and to the left. I couldn't see it either and then the mrs. is like "It's right THERE". 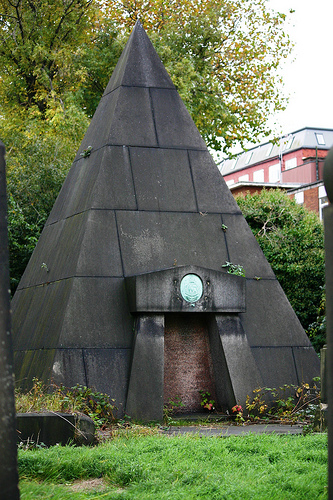 It is the tomb of one William McKenzie who was interred in it sitting at a table with a winning hand of cards held in his bony fingers. He was supposed to have lost his soul to the devil in a poker game. He reasoned that if he wasn't buried then the devil couldn't take his soul. This is supposed to be one of the most haunted places in Liverpool.
edit on 26-2-2013 by nolabel because: (no reason given)

posted on Feb, 26 2013 @ 03:38 AM
link
Yeah Masons and other related secret societies,I kid you not you cannot go a day in any western city and not be reminded of ancient Egypt.

Originally posted by nolabel
We have our own pyramid tomb in Liverpool. It is located in St Andrew's Church, Rodney Street.

It is the tomb of one William McKenzie who was interred in it sitting at a table with a winning hand of cards held in his bony fingers. He was supposed to have lost his soul to the devil in a poker game. He reasoned that if he wasn't buried then the devil couldn't take his soul. This is supposed to be one of the most haunted places in Liverpool.
edit on 26-2-2013 by nolabel because: (no reason given)

You beat me to it! I work around the corner from Rodney Street on Mount Pleasant..


What a great find, interesting to read about too! I love hidden treasures like this.
S & F