Bear with mange could explain Bigfoot or a werewolf.

posted on Feb, 23 2013 @ 04:12 AM
link
I ran across this and to me it is the absolute best explanation for these sightings of Big Foot or Werewolves. Especially Big Foot as most somewhat credible sightings often take place in the Pacific Northwest where bears are more than abundant.

Bears often stand up like a person if something is near them so they can smell and look around. I see bears daily where I live except during winter but I have yet to spot one with mange. Look at this photo. This could easily be called a creature if you stumble on one of these deep in the woods. I am not scared of black bears for good reason I see them all the time and they do not mean humans any harm around here. Look at this young black bear chilling 5 feet from me: 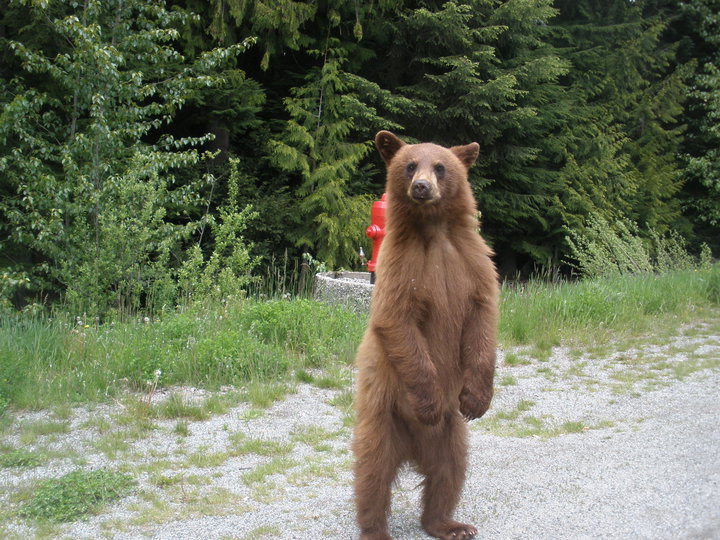 Now look at a big full grown adult bear with mange and imagine this thing standing up and looking at you all pissed off and miserable from its painful condition: 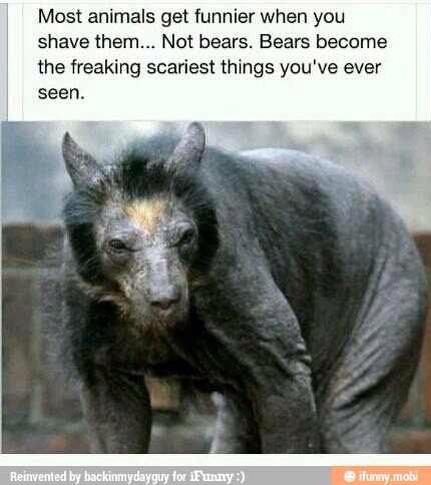 This might very well be where the big foot legend has come from. There are thousands of bears in the PNW and some of them have this condition.


Certainly possible......Also I'd be surprised if this particular bear hasn't been mistaken for Bigfoot more than once!
*skip to :40 seconds in to see the good stuff*


Certainly possible......Also I'd be surprised if this particular bear hasn't been mistaken for Bigfoot more than once!
*skip to :40 seconds in to see the good stuff*

If this bear came running after you on two legs, you've have something to talk about. Or if it came into "town" and walked into a bar. Nice video, I'll be showing this one around.

Originally posted by AfterInfinity
They've already explained that Bigfoot is a hybrid. Use the search function.

I do not have to search to know that has not been proven or "explained" because a body does not exist. If you have a link to a definitive explanation, be my guest and post it. I am sure there are thousands of posts on this site about Big Foot but Big Foot sightings remain unexplained still to this day. No scientific evidence of merit exists only witnesses. My post offers a new explanation of so called Big Foot sightings by credible people that has gone on for decades. If you saw a bear with mange standing up deep in the woods at night what would you think?


Ive heard the bear theory before, the problem is they cant stand up for a signifigant amount of time, though long enough to account for the short videos not all of the eyewitness sightings

posted on Feb, 23 2013 @ 12:06 PM
link
Bears do not walk like Bigfeets recorded on videos or just seen with the eye. Nor do they walk for extended periods on their hind legs, as has been recorded many times on videos that have not been debunked.
Sorry, but your theory simply does not stand up long enough, let alone walk on two legs

You are funny! Love the twist on the humor.

Anyway, what proof? All videos of any Big Foot are clearly in the hoax category. I am confident the new one will be too! IMO a bear with mange is occams razor for sightings by "credible" witnesses which are most likely the very small minority of Big Foot reports. Most are from nutsos surely.

but dont see any resemblence to a bigfoot.

The following is my opinion as a member participating in this discussion.
That mangy bear image would look like a fat man in a badly fitting onesie if not for the head.

Look at the back legs? Like a pair of cheap pants.

posted on Feb, 24 2013 @ 05:31 AM
link
The Patterson video is proof enough for me or anyone willing to accept reality over their ego.

Before anyone cries "debunked", I will tell you now that you are wrong.

posted on Feb, 24 2013 @ 06:45 AM
link
Mm I could see how maybe if you caught a glimpse of a mangey bear through a break in the trees or from half a mile away it might be mistaken for bigfoot.

But that's no flea bitten mangey bear in the Patterson film.Whether it's a real bigfoot or a man in a suit probably won't ever be shown conclusively (personally I think it was a bigfoot !!) but that wasn't a bear !!

Originally posted by intelligenthoodlum33
The Patterson video is proof enough for me or anyone willing to accept reality over their ego.

Before anyone cries "debunked", I will tell you now that you are wrong.

Awful lot of irony in this post. You're certainly one to speak of ego...

People want big foot to exist, therefore it does. In the minds of people like you that propagate nonsense.


I would make a great lawyer, thanks.

People used to think that the existence of blackholes were nonsense too, but now...

So do you think the Patterson film is just a lonely bear with the mange? If so, yes, you are wrong.

posted on Feb, 26 2013 @ 12:08 PM
link
The theory, while interesting and certainly has the potential of explaining some sightings, does not account for the parallels in descriptions, down to minute details, as shown in sketches made by experienced artists, based upon those eye-witness descriptions.

While bears do stand on two legs, I've never heard of them running on two legs. Their front legs do not have the proportions to the torso that is common in sighting reports.


Whats going on thats a bear LOL? I cant wait to see a big foot or sascuach. There totally REALLLL!

Someone mentioned that this could account for some of the more "credible" sightings- I tend to agree with that line of thought. Some are flat out hoaxes, some are crazy people and some of the people HAVE to be credible (they cannot all be hoaxes or insane people)-

If I saw that mange bear (like the picture) standing up...I would honest to God think (and swear) that I had seen a werewolf . I would pass a lie detector, tell my children the story and truly believe it myself...And I have seen bears in the wild.

I am a skeptic when it comes to most things crypto- But tat doesnt mean I discount all the sightings...At all. I just discount the ones I have so far heard/seen- Honestly I think there are creatures on this Planet (especially in the Ocean- which are true monsters and have yet to be discovered. That said, i think you are onto something OP. cool thread.

posted on Feb, 28 2013 @ 01:51 PM
link
Bear with mange? That could account for a few sightings I suppose. Most sightings mention the hair though, so I think a thousand other witness and/or video accounts fall through the cracks of your hypothesis. If this is "the absolute best explanation for these sightings of Big Foot" then I believe a jury would have to conclude that Bigfoot is real.

Bigfoot is real only because people want it to be real?? Come on man, my wife wants Leprechauns with a pot of gold to be real, my daughter wants Unicorns, and I want go around town on a freakin' Pegasus. But no one sees any of those repeatedly. I hate to break it to you but nobody cares about a smelly upright ape in the woods, they just run into them there.

If you want to be part of the "jury" on Bigfoot, you will need to examine all of the evidence without prejudging (i.e. prejudice). If you objectively weigh the mountain of eyewitness accounts, foot prints, hand prints, photo, film, video, audio, FLIR, and other evidence out there, I believe a reasonable person would certainly find that the preponderance of the evidence weighs in favor of existence, and probably find for clear and convincing evidence of Bigfoot. I will concede that "beyond a reasonable doubt" has not been reached yet, but please keep in mind that the first dissected bodies of the duck billed platypus were determined to be a hoax.

I think it's been proven many times over that most sasquatch sightings are not bears. There are plenty of simple differences: bears have small sloping shoulders, sasquatch witnesses describe huge shoulders and broad chests. Bears have large protruding snouts when viewed side-on. Again, sasquatch witnesses describe flat, primate-like faces (ie no snout). Bears are only able to walk for very short distances on their hind legs, whereas sasquatch tracks have been found to travel for many miles in extreme wilderness areas bipedally (on two feet only).
So bears with mange could account for one or two sightings perhaps, but they can't account for the vast majority of them.