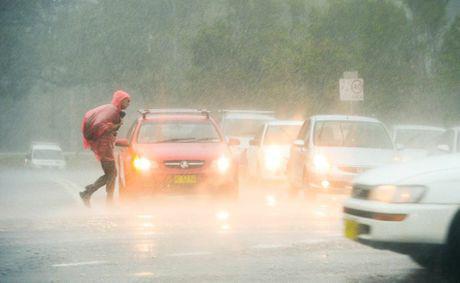 By now, many of SE Queensland's residents have become used to the rains and flooding that has accompanied this summer. It began with nice, almost southern sunny days, and seemed to be a return to the previous El Nino years, with a minimum of rainfall.

Then ex-TC Oswald came to visit, on the Australia Day long weekend no less. Some areas received up to 300mm in the space of the weekend, which caused devastating floods in areas such as Bundaberg. Where I am, the damage was nowhere near as bad as some areas, but we did have to sandbag low lying areas and clear quite a lot of fallen trees and debris from the roads and on properties in the aftermath.

The truth is, it's been wet here ever since. Some days have topped 50-60mm of rain, and the ground is soaked. Every time it rains, we have small amounts flooding in very low lying areas. The last two days have seen a brief return to sunshine, before another system of black clouds has rolled in from the west. At the moment we are being to treated to a brilliant display of thunder and lightning, which is going to turn into another week of rain and wind for us.

This report, from the Sunshine Coast Daily, details what's to come;

HUGE swathes of the Queensland coastline are expected to be hit by heavy rains, gale-force winds and flash flooding from Sunday afternoon.

Emergency Management Queensland has warned those living from Bowen to the New South Wales border to prepare for the weather onslaught.

Thunderstorms are expected to develop on Saturday afternoon in Central Queensland, including the highlands, with those spreading to include south-east Queensland by the end of the weekend.

Those in these areas should begin preparing for the flash flooding and damaging winds expected to accompany the storms.

We are also expecting another 180-200mm of rain in the next seven days, so a little more spread out than the Australia Day long weekend, but still heavy rain for at least a week straight, after the ground is already pretty well soaked.

Rainfall estimates for the next seven days.

I just hope the ground and rivers can take it. People are still cleaning up since the last lot. The BOM has assured us it won't lead to more flooding. Honestly, I'm not so sure, but remain optimistic we won't be sandbagging again by the end of the week.

posted on Feb, 23 2013 @ 02:52 AM
link
I am loving the weather, and yes, we did get hit by the last lot, we lost our ceiling when a branch fell on the roof. It just seems like since dec 2010/jan 2011 people are going nuts every time rain is forecast. Every weather group I follow on Facebook has hundreds of comments 'oh no! not again!' 'send it elsewhere' 'omg its going to flood again'

It's rain. We live in a country that goes through wet and dry seasons. We should enjoy it now, before its a drought again, and we are receiving another little timer for our 4 minute showers and not mowing our brown lawns! Definitely don't miss that!


I'm not freaking out, that's for sure. This is my first year in Qld in almost 10 years, and the last time I lived up here, we had floods one year, and then drought the next. Wivenhoe even got down to 8% at one stage, a far cry from the 191% it was before the 2011 floods.

I don't mind the rain, was just part of the clean-up effort after Oswald came to play. Don't really want to go through that again only after a few weeks, and I'm pretty sure people in Bundy are saying the same.

Besides, the amount we're getting over the week is about the same we got in three days in January, so it shouldn't really be as bad.

posted on Feb, 23 2013 @ 03:01 AM
link
We really need some of that wet stuff you call rain down south, maybe it would even give firies a break if it was enough. Stark contrast from north to south. Good luck with the wet!!


I've seen the fires in Vic the last week, it's getting pretty hairy down there. My folks still live in SA (where I'm from originally), and they reckon it's been dry as a bone for a few weeks now. Certainly makes it worrisome when you consider the fires in Victoria already.

posted on Feb, 23 2013 @ 05:45 AM
link
We would welcome some down in South Aus, it hasn't rained a measurable drop where I live since at least August last year.

Of course some scientists will say this has nothing to do with climate changes, if you're over 30 you will know it to be true. I still stand with "An Inconvenient Truth" by Al Gore, not because of Al Gore, politics aside, the data provided is real with scientific backing, but inconvenient.