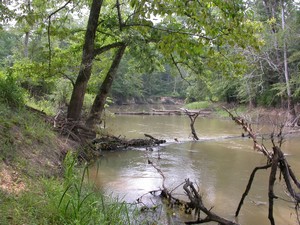 Miranda Wells walked barefoot in her favorite pale blue nightgown in an open field, enjoying the warmth of the morning sun. She barely noticed the discomfort from the jagged corn stocks left on the ground from the recent harvest, as they pressed unforgivingly into the tender soles of her feet. But these did not stop her. And despite her slow and unstable gait, she moved forward towards a strand of trees lining the river bank.

Midges danced about her head as if in celebration, following her careful progression across the field. She did not notice them very much either, although they provided a strange companionship Miranda appreciatively acknowledged in the deep background of her mind.

It would only take a few moments to reach her goal now.

A murder of crows lined the treetops before her, like hosts waiting for the arrival of an expected guest. They called to one another, announcing her approach. These she noticed and smiled. Their song was lovely to her. She raised her arms in open greeting, but continued her march forward.

When she arrived at the field's edge, the ground became more smooth, releasing her body to match the quiet urgency of her will. A few short steps up a dirt mound into the strand of trees brought her nearly to the river's edge. It too sang to her as the swift waters passed by on their own journey somewhere beyond the bend.

The clay, though perilous beneath her feet, held fast and did not force her to fall. Her bare toes stopped just short of the cool border of water. She breathed deeply and once again opened her arms wide in a joyous, but silent, greeting.

A kingfisher darted by, unconcerned by Miranda's presence, landing upon a perch only feet away. She smiled at it and quickly noticed the same small fish running just beneath the surface along the bank that held its interest.

Further away, Miranda heard a splash of water, revealing the location of much larger fish enjoying a meal.

"Has she done this before?"

"No. She really hasn't. Never overnight. Certainly not three days!"

"Ms. Wells, I understand how difficult this is. Please understand we have everyone looking for her. Chances are we haven't located her yet because she might be with people who are still trying to figure out who she is. Eventually someone will call the police or a hospital and we will find her."

posted on Feb, 23 2013 @ 02:51 PM
link
I like your writing style. The descriptions of nature surrounding the traveler are enjoyable, and it flows nicely. At first I assumed the protagonist was a young woman, though I'm not sure why.

I found it interesting that the entirety of the real "storyline" is contained in the last few lines of dialog.

It achieves what it seems to have intended, but the brevity may prevent the reader from being "carried away" or engrossed a bit deeper in the aura. It is a good day when the only constructive criticism is "more, please!"

Thanks for submitting this composition!

posted on Feb, 23 2013 @ 03:02 PM
link
That was really beautiful and sad all at once. I liked the way you structured it and the contrast between what Miranda was experiencing versus Tonya at the end. The end was a good twist, it wasn't what I was expecting and it worked really well IMO. It was one of those stories I wanted to continue and find out what happened next. Thanks for sharing.

Wrote it on a hand-held device on the spur of the moment. Trust me, it felt much longer that way.

When I posted it, I thought I would immediately have time to work on it further, but then missed the 4 hour window to edit.

Glad you enjoyed though.