Did the Knights of Malta cause the Pope's Resignation? (and a disney movie about Pope Wizard of Oz)

Noted Catholic scholar Michael Jones, editor of Culture Wars magazine, could not contain himself when, in the lobby of Tehran’s Parsian Hotel, he was confronted with the news. “But…but that’s unprecedented!” Jones shouted.

Dr. Robert Moynihan, editor of Inside the Vatican magazine, is no conspiracy theorist. He’s THE quasi-official Vatican-embedded journalist and commentator. So when Moynihan let slip a soupçon of skepticism about the “resigned due to old age” story, my ears pricked up and my hair stood on end. Moynihan points out in his latest journalistic encyclical that the Pope sure didn’t look like he needed to resign for health reasons: “I saw the Pope twice this week, once at a concert (on Monday evening, where I was sitting about 20 yards away from him) and at his General Audience on Wednesday. For a man of 85, he looked well, though he did seem tired.” Why, pray tell, did he “seem tired”? What, precisely, was weighing on his infallible mind? Moynihan takes a guess:


On Saturday, I intended (sic) a funeral Mass in St. Peter’s Basilica for a cardinal who died last week (Cardinal Giovanni Cheli). Pope Benedict was scheduled to attend, but at the very last minute, he canceled his attendance. This was an indication to me already Saturday evening that he was unusually tired (he had spent several hours that monring (sic) with the Order of the Knights of Malta). Normally he would have been present at a cardinal’s funeral.

Monihan’s typo “monring” (“my ring”) is suggestive. The Pope’s office is symbolized by the Ring of the Fisherman, which is ceremonially transferred when the papacy changes hands. Wikipedia, the Zionist authority on everything, explains:

During the ceremony of a Papal Coronation or Papal Inauguration, the Dean of the College of Cardinals slips the ring on the third finger of the new Pope’s right hand. Upon a papal death, the ring was ceremonially broken in the presence of other cardinals by the Camerlengo, in order to prevent the sealing of backdated, forged documents during the interregnum, or sede vacante.

What a scurrilous bunch those papal hangers-on must be! Moynihan’s Freudian slip occurs in the middle of the sentence:

This was an indication to me already Saturday evening that he was unusually tired (he had spent several hours that monring (sic) with the Order of the Knights of Malta).

So THAT’S what was weighing so heavily on Pope Benedict: Spending several hours that morning with the Knights of Malta. The meeting exhausted him. So he resigned.


I would say more, however that pretty much summed it up (there is a bit more to the article which I did not post entirely). So, what do you guys think? Have you heard any rumors out there in the blogosphere?
edit on 20-2-2013 by NJoyZ because: Nothing to say other than that and my following post.


did you say anything? 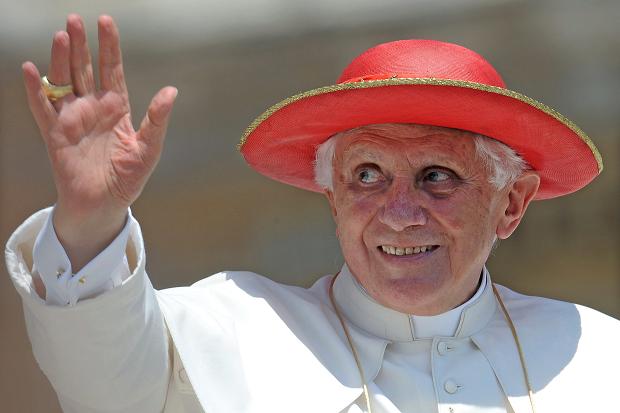 Notice his hand position and his hat.

Now, Look at the movie poster about "The Great & Powerful Oz": 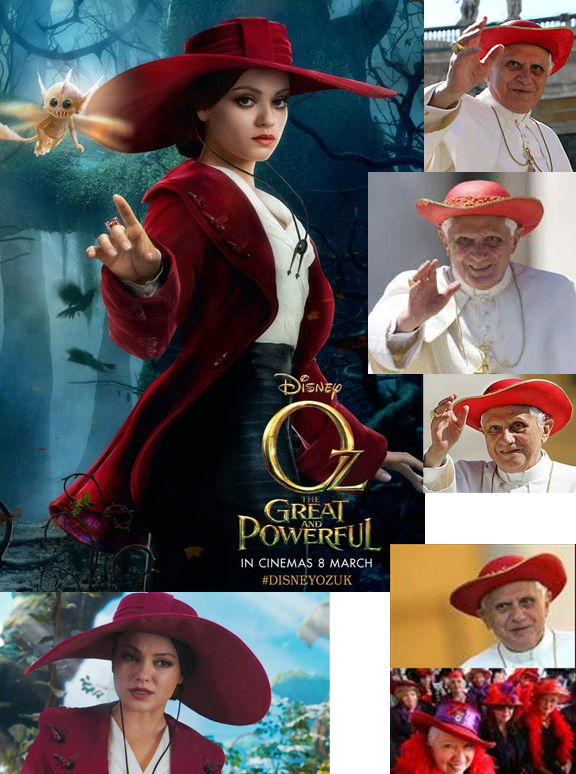 The red hat is also a primary feature of many of the Cardinals Coat's of arms, including the primary candidates for the opening Pope position and both so called "Peter"s 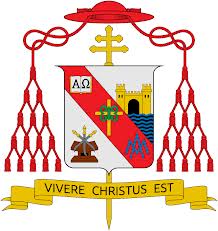 How much forewarning would Disney need to put together a movie based on the events of the Papacy, How far in advance are things planned?

Note: another tid bit of info an the outfit of the pope and Mila Kunis is that the shirt below should be white like a mushroom stem, and on both of them, it is. this is in reference to ancient pagan rituals of the Amanita Muscaria. I''m sure it has been covered in depth elsewhere, I just anted to inform those of you who may not know so that you can see its not just he hat, its the out fit, the hand, the title of the movie. Correlation.

This was an indication to me already Saturday evening that he was unusually tired (he had spent several hours that monring (sic) with the Order of the Knights of Malta).

if you swap the positions of the R and the N it spells morning and would just be a common typo but that wouldn`t make a great conspiracy.

posted on Feb, 20 2013 @ 12:17 PM
link
I have no idea if the Knights off Malta were involved, but I'm feel fairly certain that the diddling of minor aged males played a big part in the decision, on some ( or many) level(s).

posted on Feb, 20 2013 @ 12:18 PM
link
The Knights of Malta thing is interesting. He may have been shown the door. Then you say that Mila Kunis was in some sort of conspiracy with the Pope to lift her arm up, and to wear a hat. The costumer of the movie had to be in on it, and the Disney people of course, and then Mila was promised the papacy (silly girl, they probably won't deliver). And they all look like mushrooms. OK, I believe it! No business like show business! (The Knights of Malta thing is good though).
edit on 20-2-2013 by Aleister because: (no reason given)

posted on Feb, 20 2013 @ 12:21 PM
link
I don't know about the red hat and Disney, either. But I would say that I wouldn't let any man who'd be seen in public sporting a hat like that get anywhere near my kids!