The Bulgarian premier and his whole government is resigning from office after nationwide protests against austerity.

posted on Feb, 20 2013 @ 10:16 AM
link
Sorry if this has been posted elsewhere but I feel this is highly significant piece of news given the austerity measures being enforced across Europe.

Personally , I hope other governments will be taking note of this and quickly choose to abort austerity measures that are destroying communities across the EU or do as the Bulgarian prime minister has done - the only decent alternative IMO - RESIGN!.

news.sky.com
(visit the link for the full news article)

There are a lot of stories/articles about this, here's some more:
Reuters

This story is a lot more complex than a lot of the media are reporting and is coupled with a very disturbing story that is just breaking here. A protester in Varna self immolated this morning in front of the local government offices. He was apparently upset by the violence that had occurred in the last weeks.
Source
What is not being widely reported though is that he is friends with the son of the leader of the protests in Varna who was stabbed last week.
Source


Read the link from Sofia Globe in my post above, it details the procedure that the constitution demands.

I was impressed with the prime ministers comments in regards to Bulgarian police beating citizens that voted him into power. He obviously felt strongly opposed to this type of violence being used by the police. If only more leaders adopted his attitude we would be living in a far far better world for all of us.

Could his actions lead to a domino effect taking place among other leaders and other governments in other countries, one wonders?


Its an interesting point, Borisov said he was shamed by the spilled blood etc, but he was the one in charge. The buck and blame rests squarely with him.

I've only lived here for a couple of years and I'm still learning a lot about the political BS that goes on here. This guy was the personal bodyguard to the last communist dictator, Todor Zhivkov.

What gets me is how quickly he folded, in any other country he would have fought tooth and nail to hang on to his power, but he just quit pretty much overnight. He did try to make amends though by firing the finance minister on tuesday and roll back the energy price rises by 8% - but in the summer they went up by nearly 13%... We're still getting screwed here.

The mafia, corporations and politicians are very much in bed together too and have been since the early 90's. My prediction is that the next government will woo the voters with all kinds of 'hope and change' BS, but the citizenry here is extremely fed up and jaded with the political classes. Its early days but I think the general public are aware enough to demand real change here, how much they will actually get is up for debate.

posted on Feb, 20 2013 @ 12:22 PM
link
Respect to them. The criminals that run all the other countries will not stop until we are all priced out of life. Literally.
When we are all broke, starving and fighting, they will take full control and we will all be royally screwed.

maybe places like SPAIN, Grease, Portugal, and Italy can do the same....it would be nice.....

posted on Feb, 20 2013 @ 12:27 PM
link
For what it's worth, a cousin of mine spent 4 years there in the peace corps, and according to him and his experience, that country is almost entirely mob run, and a rather crazy environment where youth are exploring freedoms they didn't have access to some years ago, rather interesting setup.

Originally posted by zedVSzardoz
reply to post by MisterMiyagi

maybe places like SPAIN, Grease, Portugal, and Italy can do the same....it would be nice.....


It already happened in Greece a couple years ago. www.telegraph.co.uk... rmed.html

Some more on how that went down:

Originally posted by ObjectZero
If they all step down who is taking their place?

Hopefully no one. I would like to see what happens to a society that is free.

One quote is particularly interesting and pretty much sums up what's going on here...


“Mr. Borisov is a typical populist leader who came to power promising to take revenge against the transition on behalf of the poor,” says Andrei Raichev, a political analyst at Gallup International in Sofia. “Now the people realize that they were lied to.”


...no one could predict how the public would react to the resignation. “We could even reach the absurd situation that the protests continue against no one,” he said. “Which means that they are against everyone.”

It will be interesting to see where this one leads so if you have any more news in regards to who exactly ,if anyone, is replacing the Bulgarian PM then please post the details on ATS asap. Thanks.

posted on Feb, 21 2013 @ 08:34 AM
link
This is the most intelligently written analysis of the situation here that I've found from AlJazeera.


On the political side, demands have gone even further to seek an overhaul of the political system in Bulgaria. They have made clear that the system has to be changed in such a way that when the next party comes to power, it can no longer behave the way all governments in Bulgaria have for the past 24 years.

There have to be checks on political power and mechanisms to prevent collusion between politicians, private economic interests and organised crime. Protesters are currently calling for a Constituent Assembly to be formed to change the constitution and develop mechanisms of direct involvement of citizens in government matters. There have been proposals of specific measures to be taken such as: cutting the number of members of parliament to 240; stripping them of immunity; establishing procedures for early dismissal; establishing 50 percent citizens' controlling quota in state institutions.

In short, a new system has to be established in which elected officials do what they are elected to do, and citizens are close enough to them to make sure they do it.

Of course the global media only report so much and don't offer news on the local issues here. This is from Dnevnik.bg (its in Bulgarian but just stick it through Google translate)...


Participants in a protest rally in Pleven said tonight that will continue their fight against all monopolies in the country. Requests were referred not only to the distribution companies and the "heat"and "water" but also mobile operators banks and bailiffs.

But the big shock comes from what Borisov said in his resignation speech.


Speaking from the parliamentary rostrum just minutes after parliament accepted with overwhelming majority the resignation of his government, Boyko Borisov said Ahmed Dogan wanted him dead, citing a document from the intelligence of a foreign country.

“The intelligence agency of a partner country has provided documents, which clearly show that there were preparations for an assassination attempt on my life,” Borisov said in a short and emotional speech.

Borisov directly accused Ahmed Dogan as the mastermind of the assassination plot and called on parliament to form an ad hoc committee to make public the classified document.ext

Ahmed Dogan was the guy who had a gun put to his head on live TV last month...
Source

It also appears that tragically another person has self immolated, this time in Veliko Turnovo, although this time he unfortunately died. Coverage of this is a bit sketchy at the moment, but here is a link to what i could find.
Source


This is why I love ATS. While mainstream news scratches the surface we get in depth analysis and information that gets over looked or distorted time and again by the msm.

Given the amount of important information uncovered here, particularly by your good self Severin, It's a real pity more people won't see this thread.

Finally, RIP the man that killed himself by setting himself on fire on Monday.

Let's hope and pray that the 2nd man can make a full recovery.

You make an excellent point there, Bulgaria is a small and insignificant country in grand the scheme of things and such it doesn't garner a lot of interest, but if what we achieve here in the coming months and years is successful I think it could actually be a benchmark for other countries to follow... who knows? Perhaps a Balkan Spring?

posted on Feb, 21 2013 @ 09:19 AM
link
Perhaps the government realised, which it appears others in 'charge' are yet to realise, that when the people have nothing left to lose, throughout history, the Elites better start running! Let us hope they come to their senses and stop this destruction of society for all our sakes. 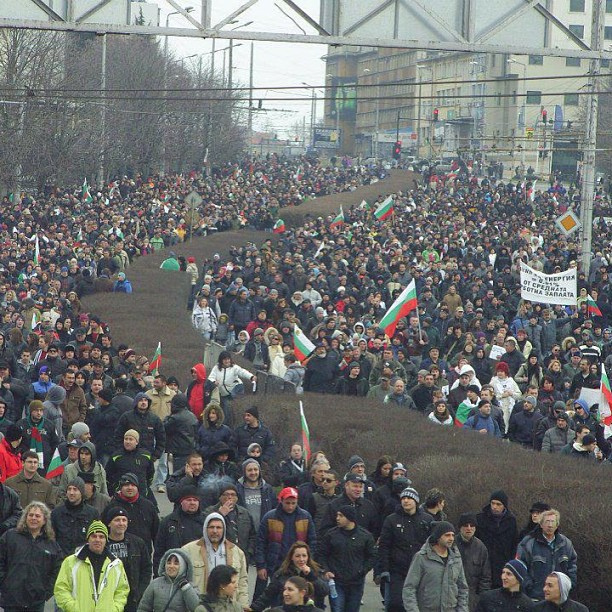 Even though the government has now resigned the protests continue with tomorrows (Sunday 24th) looking to be the biggest yet.

The Bulgarian President, Rosen Plevneliev has decided to join in...


...he has been invited to attend, and will go to show respect for the demonstrators and to hear what people have to say. "They can expect from me only good intentions and integrity. There is deficit of justice and too many unfulfilled promises. All together we can and must seek solutions for the problems. The doors of my institution are open for all," said he.

The President stressed current events were a chance for returning the people to the State; a chance that must be utilized, not wasted. He explained his role was to seek consensus and work for a constructive approach to the numerous and different demands of Bulgarian people.

Meanwhile Bulgarians living abroad have vowed to show support for their countrymen by protesting outside Bulgarian embassies in numerous countries...


Peaceful demonstrations are being organised for tomorrow in Vienna, Munich, Dublin, London, Dusseldorf, Frankfurt, Athens, Berlin and Madrid. Bulgarians in these cities will stage protests in front of the Bulgarian embassies in the respective countries on Sunday, February 24. 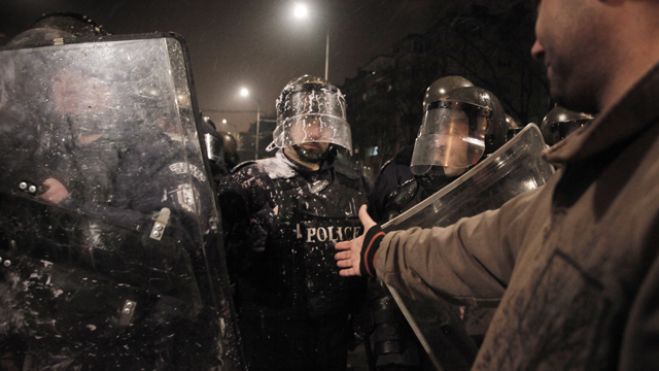 It appears that this is getting lots of internet attention judging by the sheer numbers of news articles, but nobody really knows anything of it outside Bulgaria via MSM.

From an interview with one of the protest organizers:


FOCUS: What is your opinion about the government’s resignation? Was it an expected move on the part of the outgoing Prime Minister Boyko Borisov?

Zhenya Koleva: The government’s resignation is not enough and does not solve Bulgarians’ problems and that’s why the protests continue. In my opinion and according to the protestors in the city of Sliven this is the latest circus they played. This is the latest lie and trifling with people. They abdicated from all problems in order to get out of all problems and what has happened with people … nobody cares. They stole millions, billions and hid. People must regain Bulgaria.

This is a report from my city - Plovdiv:


The protesters burnt the Constitution of Bulgaria as a mark of a protest, saying that it does not protect the rights of the citizens but only of the rich people 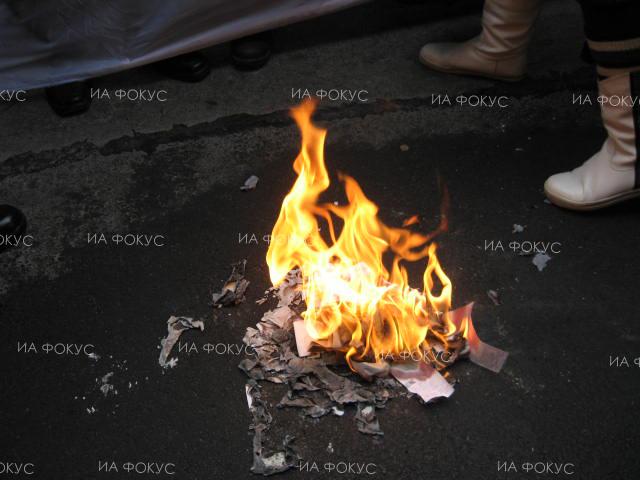 Here's a video i made, but my battery died before i could get the entire crowd: