posted on Feb, 20 2013 @ 06:29 AM
link
I don't know if anyone caught Channel 4 news last night. They were discussing how in April of this year, Britain will lose 10% of its energy supply, due to the closing down and coming off line of power stations and nuclear power stations. The thing is we have no current plans to build anymore power stations in the near future. Leaving the UK vulnerable to gas supplies in a global market place.

Just next month, the UK is set to lose about 10 per cent of its generation capacity as coal- and oil-fired power stations close to meet environmental targets.

Found the link above with news report.


I was surprised there was not anymore news about this. Surely this is possibly one of the biggest cock ups the new labour lot have left us with. Not to mention the Torries inaction as well.

Many of Britain's neighbours may find this rather amusing. Britain, the only big west European country that could have joined the oil producers' club OPEC, the country that used to lecture the world about energy liberalisation, is heading towards South African-style power cuts, with homes and factories plunged intermittently into third-world darkness.

Britain currently has around 15 per cent of spare generating capacity but that will fall to below 5 per cent within the next three years. “People have been asking ‘where’s the new nuclear, where’s the clean coal, where’s the carbon capture’. It’s not there and it won’t be there this side of 2020.”


Looks like yet another step in the degradation of the UK, the planned take-down. The energy companies are having a field day with record profits and this will just give them yet another excuse as to why their prices have to increase. Fuel poverty is a vastly growing issue which is only going to get worse with this plan. What the hell are they thinking? Greece is already on it's knees, is that where we are headed? 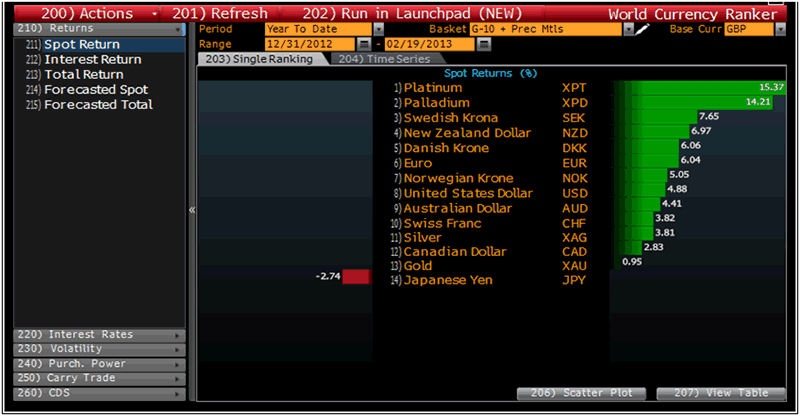 The only currancy the pound not losing value to is the yen but maybe thats the plan.

In the U.K., which -- unlike Greece -- isn’t part of the euro area and can devalue if it wishes, there’s growing pressure to do so. A letter recently circulated to some 3,000 influential figures proposed deliberately weakening the British pound to boost exports and hence economic growth. Debasing currencies in this way is promoted as an alternative to sovereign default, as well as to other methods of increasing competitiveness, such as cutting nominal wages.

posted on Feb, 20 2013 @ 07:28 AM
link
Sounds like Peak Oil is the culprit for this. Britain used to be an net energy exporter during the Thatcher years because of the oil discoveries in the North Sea.

Now that the oil there is depleting Britain finds itself needing to import energy. This is wrecking havoc on the British economy.


Its either gross negligence or something more sinister. Either demands more investigation.


Petrol and diesel prices have already risen 5p a litre in just the last week alone, this is going to hike it up even further.

Gas and electricity prices have only just rised 10% a month or so ago, and now with the engineered devaluation of the £, reduction in domestic generation meaning we will be at the mercy of foreign energy suppliers who can charge what they want.

Which means more thousands of pensioners will die every year due to energy poverty.

Solar technologies are not the be all and end all for energy in the UK, but they can make a significant difference to people who are suffering energy poverty.

If 30% or 40% of a household's energy is generated using a rood or walls clad in solar panels, this would make the difference, literally, between life or death for tens of thousands of people.

But where is the Government drive to secure massive orders of solar tech, huge buying would bring the costs down to pennies per Watt, there are Solar energy maufacturing companies going bust all over Europe, so there's no shortage of companies that would be fighting over themselves to get the manufacturing and installation contracts.

What about Solar on a roll, very cheap alternative to riged panels..printed like a newspaper is, on a continuous roll, using energy producing inks and dyes. Not quite as efficient as traditional panels, but in terms of cost per Watt, is cheap enough to be used as wall cladding.

Then there was another system that have developed a paint that could produce electricity like a solar panel, effectively turning an entire building into a huge solar panel.

Or windows that doubled up as solar panels.

There was also a Uni student who developed inks that could be used in a normal domestic ink jet printer, so anyone could print there own solar panels onto flexible plastic sheets, very cheaply.

The government keeps going on about climate this and that, alternative energy this and that, and closes power stations due to environmental concerns, WHY then are the Government not chasing all of these solar technologies like a dog chasing a bitch in heat?

"The facts are stark. By 2025, if current policy is unchanged, there will be a dramatic gap on our targets to reduce CO2 emissions; we will become heavily dependent on gas; and at the same time move from being 80/90% self-reliant in gas to 80/90% dependent on foreign imports, mostly from the Middle East and Africa and Russia. These facts put the replacement of nuclear power stations, a big push on renewables and a step-change on energy efficiency, engaging both business and consumers, back on the agenda with a vengeance." - Rt Hon Tony Blair, Prime Minister, speaking at CBI Dinner, 16 May 2006

They known for a long time there a problem but did nothing.

Blair was appointed as the Quartet's Envoy to the Middle East on January 27, 2007, the same day he retired as Prime Minster. It came about through the lobbying of former President George W. Bush and Beckett believes at the time it was an "honorific" position, devoid of meaningful responsibility, adding "now that Obama is in charge he is being pressured to be more active".

It is believed that Blair has amassed a personal fortune in excess of £20 million since leaving office, mainly through middle east contacts established through his envoy position. In 2009 he made in excess of £5million advising the governments of Kuwait and the United Arab Emirates and is also an ambassador of investment bank JP Morgan in the Middle East.

Now what does the middle east surply us with again.

or there is a master plan going on

I think it was reported yesterday that energy companys profits had trebled in the UK as well.


Maybe instead of pumping billions into the zombie banks, we could have put some money into the real economy to do the things you talk about. Unfortunately the money went to private banks, to clear their toxic assets, so they would lend again, which they haven't, just swallowed it up instead.

posted on Feb, 20 2013 @ 01:54 PM
link
It must be part of their master plan, electricity will no longer be for the masses it will be a perk for the upper class since only they will be able to afford it. The masses will have to go back to using gas lights, oil lamps and wood stoves, no more T.V. or internet for the masses to stay informed on how they are being screwed.

But hey, wasnt it just the other week that Gas Fraking was going to save with the world with unlimited cheap gas?, weird. Im sure I read about that on the news recently.

Time to buy solar panels and get a multi fuel stove.

Originally posted by epsilon69
Sounds like Peak Oil is the culprit for this. Britain used to be an net energy exporter during the Thatcher years because of the oil discoveries in the North Sea.

Now that the oil there is depleting Britain finds itself needing to import energy. This is wrecking havoc on the British economy.

No, its gross negligence on the part of about 3 decades worth of politicians.

The final villain of the piece is an apathetic, hard of thinking, general public.

It used to be that ensuring adequate power generation capacity was a strategic resource. The national grid and the national electricity boards pursued an approach of a balanced supply mix (nuclear, oil, coal and gas).

Nuclear is high infrastructure cost but can provide large steady supply at a predictable cost over the long term. Its also, when done properly, safe and relatively environmentally friendly.

The other 3 are cheap to build but dirty and subject to the vagaries of a fluctuating price we have no control over. They were used to take up the strain on the grid, coming off and online with demand.

In the 80s there was privatisation, it was decided to let the market dictate the build policy. As a result all the private companies built cheap gas power stations. Easiest way to make buck. Why does a private company care about the strategic state of the nation? Its not the government.

Other of the new companies sucked huge government grants to build wind farms of dubious utility.

At the same time few new nuclear stations were built. The legacy of more forward thinking eras were allowed to reach end of life and shut without replacement.

As a result of this national disgrace we are now largely dependent for power on foreign gas from unstable places.

For more giggles, due to no investment we also have a woeful gas strategic reserve capacity. You shut off the gas supply to the UK and its getting grim in a hurry. Theres not much in the locker.

Apart from that its all peachy. I suppose we can always beg the french to sell us some spare power from their grid.


Well BP are currently in talks with Russia to extend the Nordstream pipeline from Europe, under the Channel and into England.

Cheap Russian gas on tap, just as long as we keep letting them assassinate political dissidents im sure it will all be fine lol.

And so in the interests of well being and safety a curfew will be implemented.

Hmmm - I'm sure you see where I'm going with this.

I'm not saying it will happen, but who knows?
And given the direction of Cameron and his cronies I certainly wouldn't put it past them.

As an aside, does anyone know approximately when oil and it's revenue from the South Atlantic will start flowing?
I was talking to some friends about this a few days ago and I gave an 'off the top of my head' estimate of at least between 10 to 15 years.


The Falklands and surrounding areas.

And when the oil begins to run out I'm sure the current prohibition on the exploitation of Antarctica's mineral deposits will be ignored - and as the UK has quite significant land claims in Antarctica due to it's Overseas Territories I'm sure 'we'll' be amongst the first to take advantage of them.


Well for sure, we did steal that land after all. Unfortunatly it would go some ways to dispelling all this false jingoism and sentiment the UK government has about the Falklands being part of Britain because "thats what they want".

When in reality its about maintaining strategic control of there resources, our current wars are already bankrupting our society, dont need any more.