Curiosity: Is Rocknest a "SHIP CEMETARY"(?!) on MARS showing the remnants of a lost civilization?

posted on Feb, 16 2013 @ 04:27 PM
link
OK, now get ready for the probably worst case of Pareidolia you've ever encountered (or an intriguing discovery, perhaps 'one for the history books?!')!

But I'm serious about this: I've been looking at Curiosity's images for months now, pretty much regularly and in great detail. What's been astonishing to me is the sheer amount of non-natural shapes (resembling hinges, metal brackets, near perfect circular perforations etc.) that can be found in so many images (for example here, here or here). So, while recently having pulled up the Rocknest panorama (Sols 64-72) again, I focused on this particular area: 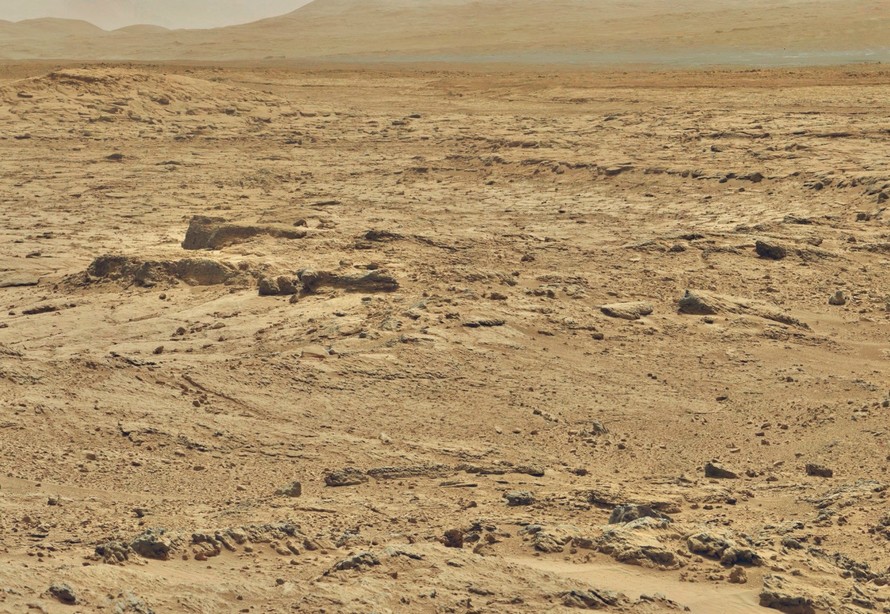 Here's the link to the panorama on GigaPan.

And I can't help it: In that particular area, I keep seeing the remains of several SHIPS and VESSELS, leading me to the assumption that we're actually looking at a SHIP CEMETARY AT ROCKNEST. It's hard to believe and I've been sceptical, too, at first. But the visual evidence is simply overwhelming and I'd like to illustrate what I mean using some annotated close-ups of the artifacts in question.

So this is the same area highlighting the potential locations of 'Shipwrecks': 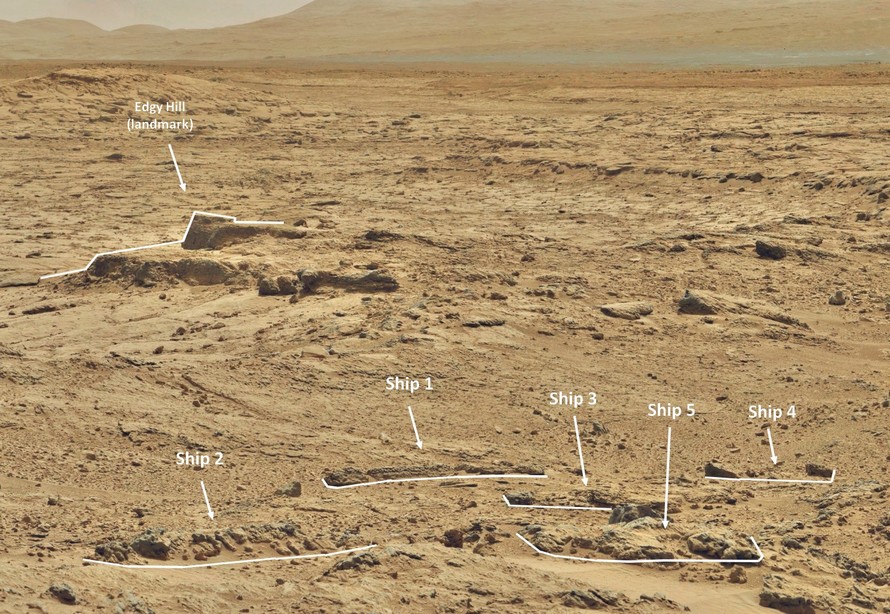 Here goes a close-up of the lower part of the area and (for comparison) a simulation/rendering of what "I" see there using ship models that indicate the rough location and inclination of the potential wrecks:

Please note that the resolution of the images posted here is not sufficient to appreciate the details of the original footage on the Rocknest panorama at GigaPan. So you really have to spend some time on that GigaPan and in that particular area in order to see what I mean. But if you do, you might come to the same conclusions. In the light of this new interpretation ("Ship Cemetary") all those other strange artifical-looking artifcats at Yellowknife, Rocknest and Point Lake start to make perfect sense.

Below, you'll find close-ups of each of those 'wrecks' illustrating how the landscape "swallowed" up these artifacts through erosion over time. I added annotations on where I made out the general shape of the ship hulls and some of the on-deck superstructures which are still visible here and there:

Ship 1 (also referred to in my previous thread): 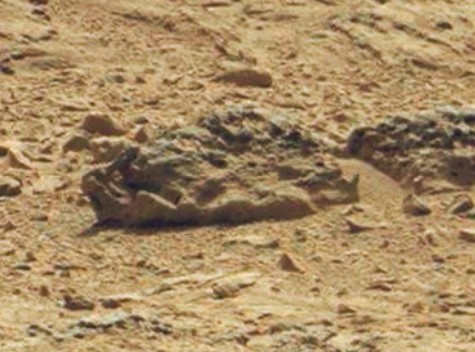 And here goes Ship 6:
(another vessel which is not referenced in my overview-image of Rocknest and lies slightly 'below' the excerpt shown above)

And, finally, Ship 7
(yet one more vessel which is located more to the right and also lies outside of the area referenced above) 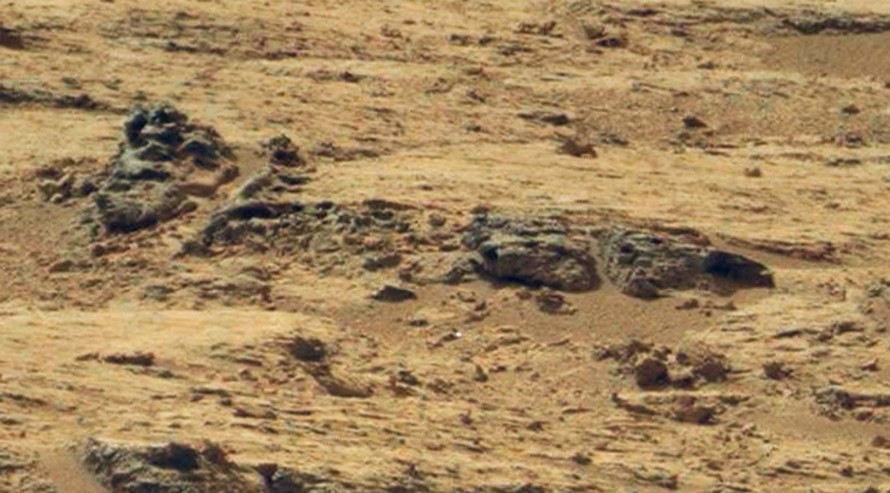 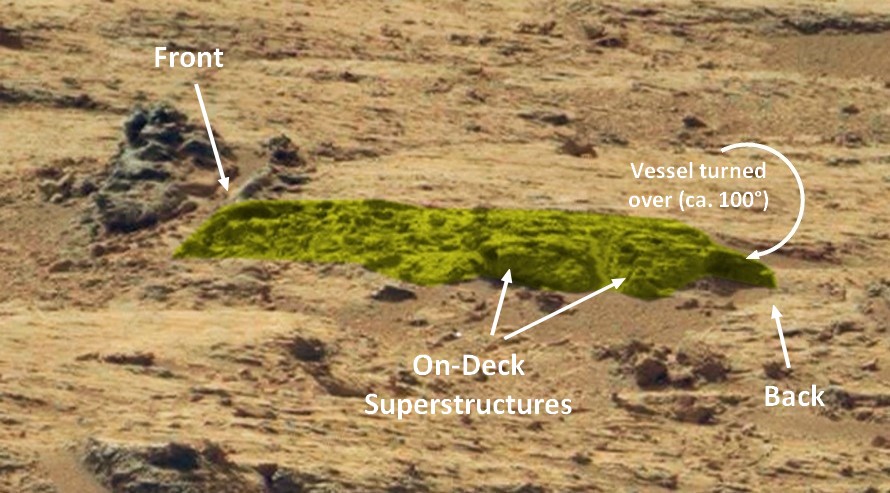 I don't know what you think (probably that I'm completely nuts, and I couldn't even be mad at you for that)! But if it were just ONE of those suspicious shapes - which by itself would be interesting enough - then it would have been easier to deny what I see. But given this amount of visual evidence, I am sure we're dealing here with something completely 'unbelievable and mind-blowing' ... !

If nobody else sees this or confirms that the area in question could actually 'be' a SHIP CEMETARY, then I will of course rethink what I said in this post. But I doubt that my conclusions will be very different from what I stated above. Yet, I'm trying to make a real case here and I think we cannot quite grasp the potential ramifications yet, if it were true that we are looking at the remnants of a lost martian civilization.

Knowing that this is an extraordinary and incredible claim, I hope you won't be to harsh with your responses!

P.S.: And yes, I'm completely excited about this!!

Originally posted by jeep3r
If nobody else sees this or confirms that the area in question could actually 'be' a SHIP CEMETARY, then I will of course rethink what I said in this post.

Please rethink what you are saying.

Looks EXACTLY like rocks to me. Rocks, rocks and more rocks.

If I tried as hard as you have to make something out of this I could come up with anything, draw lines around a shape and say "look, it's a (insert anything here).

I've been looking at Curiosity's images for months now, pretty much regularly

May I suggest you take a break from looking at pictures of rocks?

Unless martians made ships out of rocks what we are seeing is in fact, Rocks!!!!!!

Sorry Op, I dont mean to be negative but I dont see anything even slightly interesting, not even a "I can understand why you thought that" is forthcoming.

Also 1 feels if scans from MRO or the (others) orbiters would of detected crafts/structures in this area it would of probably got blocked from image sharing. So 1 is not sure of these images shared OP, but as a MARS(Aries) observer 1 appreciates your time taken to share.

Originally posted by nerbot
Looks EXACTLY like rocks to me. Rocks, rocks and more rocks.

If I tried as hard as you have to make something out of this I could come up with anything, draw lines around a shape and say "look, it's a (insert anything here).

Thanks for looking into this, nerbot. It's important to remain critical, I agree. But in this case it's really key to look at the details on the original GigaPan panorama, in order to actually 'see it'

Or take this close-up as an example:

Believe me, I had a hard time trying to figure this one out and the threshold to decide whether to post this or not was quite high. But still: I think there's something there and I further believe ATS is the right place to discuss this and - perhaps - even find some support for this (admittedly wild and speculative) theory.
edit on 16-2-2013 by jeep3r because: change formatting

posted on Feb, 16 2013 @ 04:47 PM
link
Well..you deserve credit for the effort of putting the whole thread together and presenting it the way you did.
Beyond that their is nothing in those pictures that look like anything but naturally forming things..
Good effort though.

That said, they don't even look artificial, all I see is rocks, rocks and greys... oops I meant MORE ROCKS

I applaud your imagination but sometimes. A rock is just a rock.

Unless some scale can be added to justify your claims, i think you should stare at something else for bit
If you could show me without a doubt that what we are view is on a larger scale than say...a bathtub then i am going with just plain rocks...

EDIT: isnt your other thread still open, why not add this to that one?
other thread
edit on 16-2-2013 by RadicalRebel because: (no reason given)

The wavey edges on the around the rock on the pic you posted in the middle of page 1 is very intriguing.

S&F for actually taking the time to look at it all so closely.

If anything is ever found on Mars it will be someone like you who finds it.

posted on Feb, 16 2013 @ 05:31 PM
link
If I had to pick one of these pictures and say "this looks like some sort of buried ship" I would pick number 4. The others seem more like random rock formations (well, #4 does too, but it looks the most convincing out of all of them).

posted on Feb, 16 2013 @ 05:40 PM
link
With the quality of your presentation and attention to detail, it's a shame you have wasted your time on this... Don't give up but do use your time and energy more wisely.

posted on Feb, 16 2013 @ 05:45 PM
link
a size scale would be nice...arent these rocks only a foot or two long? and what are your thoughts on why they look..'rockish'? possibly an automated program that tries to hide 'straight' or 'non-natural' looking objects by giving them an outline that looks more 'rocky' or jagged ..ie a part of a fuselage would look more like a broken or jagged rock.....just thinking out loud

I'm giving you a star and flag for putting together a very nice presentation, a great presentation in fact. And for finding a unique thing to say or guess at about the Mars rocks. And especially for the one picture where you laid out actual ships on the martian landscape. That pic is worth 10,000 words - and a star and flag!