Like the rest of you, I thought she was CRAZY but even though NASA said DA14 was not a threat 9Nania said IN THIS VIDEO uploaded last Monday that according to God's Timeline SOMETHING would IMPACT EARTH....SHE WAS RIGHT!!!

This girl said in the video presented that even though NASA said we have nothing to worry about, according to God's timeline, SHE FELT SOMETHING WAS GONNA IMPACT EARTH, and I'm freaking out!

posted on Feb, 15 2013 @ 05:47 PM
link
No need to freakout, these are not meteors. The lady of Fatima predicted the conversion of Russia by angels with flaming swords. Beings are starting to arrive that most will worship as gods. It will take us a long time to understand them but this will signal the end of the Catholic church and many others. The last Pope will usher in this change.


SHE FELT SOMETHING WAS GONNA IMPACT EARTH 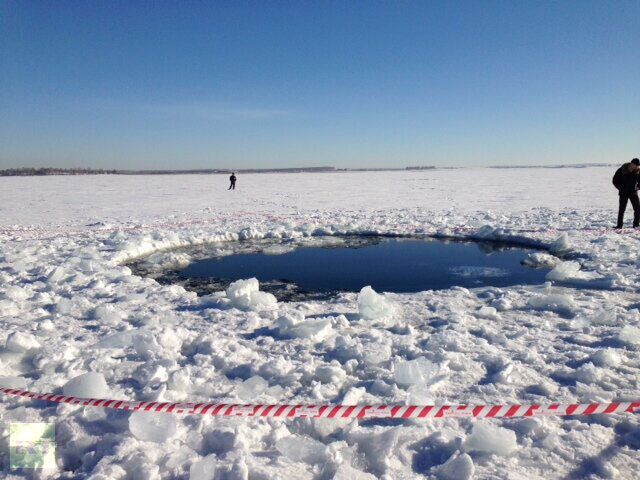 She was correct. That's the hole the meteorite made when it hit Chebarkul Lake.


I'm sure fragments hit the ground and I'm sure that crater is the result of a larger piece of that.

Meteorite strikes are quite common and I would figure some prophecy of note like the OP states would of been for something substantial.


So a "Meteor" made a perfectly round hole in the layer of ice in a lake where one of the other largest meteors impacted close to 100 years ago, something is fishy about two of the largest meteors in the last century hit the same area.

Originally posted by Destinyone
reply to post by Phantasm


I'm freaking out because SHE called it when EXPERTS said we have nothing to worry about...she put it out there in this video that something would impact Earth ON FRIDAY OR sATURDAY AND IT DID!
edit on 15/2/13 by Phantasm because: (no reason given)

doesntmakesense
+5 more
posted on Feb, 15 2013 @ 06:00 PM
link
how about you guys watch the video before trying to discredit this anyway that you can? She clearly states the asteroid is only one fulfilment in her CONTINUING timeline. She specifically states that she is not sure that the asteroid would even impact earth, although a meteorite did in fact impact earth in Russia. She is stating that the impact lines up with the timeline she set of fulfillment in prophecy. She is saying that the rise of the antichrist is among us as the 8th pope. I've never seen any of her vidoes before but if any of you had seen this one video that was posted, none of you would have been so quick on the trigger as you had been. THE METEOR MEANS NOTHING besides the fulfillment of one of the steps of the revelation.
edit on 15-2-2013 by doesntmakesense because: (no reason given)
edit on 15-2-2013 by doesntmakesense because: (no reason given)

Does it ever end? Some of these predictions are made by intelligent evidence but most of them are presented with scary music, a fearful scary voice and titles like ITS COMING!!! and Warning!!! Why do we continue to see the same tactics in these video's? Why do the producers of these videos want us to fear? Could it be some kind of experiment to test how the masses handle such a thing? Will I be apart of a statistic for replying to this video on a conspiracy site? Its almost as if all these dooms day youtube channels are going off a set script. Kind of like the movies, once you have seen one mainstream movie you have basically seen them all. Same story's different characters and settings.

Phantasm
+1 more
posted on Feb, 15 2013 @ 06:04 PM
link
I'm not freaking out as in SCARED... I'm just freaking out that she was right twice! All she's doing is paying attention to celestial alignments (March 11, 2011) and Revelations (2013) and she's accurately predicting major events. She may be a little crazy but she also may be tuned into something. There's NO DOUBT she called it.


Originally posted by tothetenthpower
reply to post by Phantasm

EVEN IF... so a hole made in ice how is this big a event? Meteorites crash into earth all the time.

You're in denial MOD... look at the pics...something DID impact Earth!