Is Obama the most pathetic "socialist" ever??

What is with that - how can he claim to be a socialist and yet all those jobs are essentially transferring from public to private sector, and all that money is being made by stock market capitalists??


Fat lot of good capitalism is doing us now. Can't really argue over the pie if there's no pie to be had, right?

posted on Feb, 1 2013 @ 04:38 PM
link
I see some misinformation being spread Obama a socialist? that's what newsweek said.

posted on Feb, 1 2013 @ 04:45 PM
link
Who claimed Obama was a socialist? Is someone throwing random words around again?

Originally posted by spacedog1973
Who claimed Obama was a socialist? Is someone throwing random words around again? 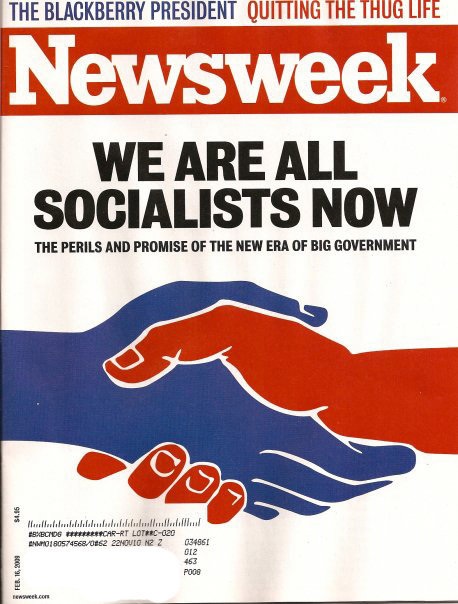 Statist is pretty close but he does love his rich friends and big corporate supporters so maybe Plutocrat/Oligarch.

And yeah, if he WAS one, he fails at that too.

EDIT: Perhaps that is all part of the agenda... 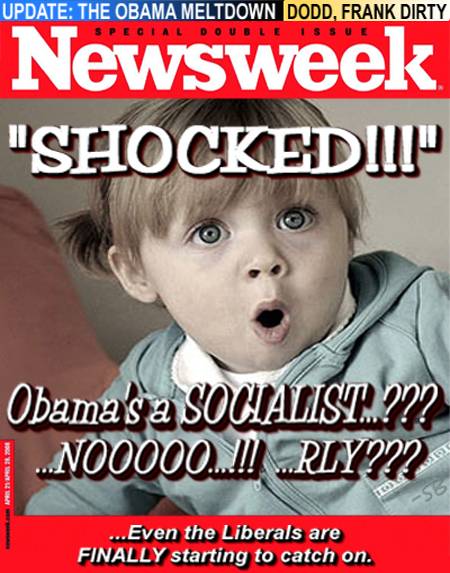 When government takes all the reward away, no one will try or want to succeed.

These are possibly the 5 best sentences you’ll ever read and all applicable to this experiment:

1. You cannot legislate the poor into prosperity by legislating the wealthy out of prosperity.

2. What one person receives without working for, another person must work for without receiving.

3. The government cannot give to anybody anything that the government does not first take from somebody else.

4. You cannot multiply wealth by dividing it!

posted on Feb, 1 2013 @ 05:16 PM
link
You know, I'm looking around at all the hateful posts and thinking, "Gosh, this looks familiar." Then I remembered why. Bush! And he was a conservative!

Guess it doesn't matter who you are. If you don't wave your magic Presidential wand and fix everything up right away, someone's going to hate you for not being "God".

posted on Feb, 1 2013 @ 05:16 PM
link
He has blended socialism with capatilism. and a little fascistism. really. maybe to confuse . Then again romney was a loon. But at least he would of made people more capable, abit better of and independant.
edit on 1-2-2013 by FreedomEntered because: (no reason given)

posted on Feb, 1 2013 @ 06:13 PM
link
Øbama is a TRANSFORMATION-IST ...the stock market ain't because of his policies or programs the stock market is because the FED is desperately trying to recapitalize the TBTF banks & market makers/brolers financial houses. etc

Øbama was all about pushing mandatory healthcare reform & making it law that everyone buy health insurance
that ain't socialism...thats being led by the nose by the health/insurance/drug manufacturers and a cadre of TPTB that can manipulate themselves into reaping the Billion$ to be made from this Øbama-Care folly


Øbama is interested in the daily hit lists of assassinations by Drone strikes
Øbama is fixated on immigration & the Pandora's Box of evils that will ensue
Øbama is focused on some sort of gun control, over regulation, and allowing guns only for Øbama fanatics


none of that is totally Marxist, Socialist...

many confound the meanings of a rebellious sociopath with being 'progressive' or 'socialist' those aspects are only light fallout from a warped sense of a 'revolutionary' vision of self....
if the man had not the benefactors from the fringes... he would still be a street actor in chicago-town being a thorn in the side of normal society


you give the front man too much credit

posted on Feb, 1 2013 @ 06:33 PM
link
Guess it just proves that he is not a socialist. I wish he was and was successful in getting socialist policies enacted. But he hasn't even really tried.

posted on Feb, 1 2013 @ 06:54 PM
link
Daily Kos? Employment numbers are misrepresented anyway. The Progressives would lie about anything for their cause.

Originally posted by sligtlyskeptical
Guess it just proves that he is not a socialist. I wish he was and was successful in getting socialist policies enacted. But he hasn't even really tried.

No, sorry, this is wrong. I posted this on a different thread, but it works just as nicely here.
Here is why Obama is the perfect Socialist
From Professor Antony Sutton

Therefore, an alternative conceptual packaging of political ideas and politico-economic

systems would be that of ranking the degree of individual freedom versus the degree of
centralized political control. Under such an ordering the corporate welfare state and socialism
are at the same end of the spectrum. Hence we see that attempts at monopoly control of society
can have different labels while owning common features.
Consequently, one barrier to mature understanding of recent history is the notion that all
capitalists are the bitter and unswerving enemies of all Marxists and socialists. This erroneous
idea originated with Karl Marx and was undoubtedly useful to his purposes. In fact, the idea is
nonsense. There has been a continuing, albeit concealed, alliance between international
political capitalists and international revolutionary socialists — to their mutual benefit. This
alliance has gone unobserved largely because historians — with a few notable exceptions — have
an unconscious Marxian bias and are thus locked into the impossibility of any such alliance
existing. The open-minded reader should bear two clues in mind: monopoly capitalists are the
bitter enemies of laissez-faire entrepreneurs; and, given the weaknesses of socialist central
planning, the totalitarian socialist state is a perfect captive market for monopoly capitalists, if
an alliance can be made with the socialist powerbrokers.

And oh yes, Sarah Palin was RIGHT when she talked about Obama and crony Capitalism

Who knows, maybe she reads Antony Sutton too


sigh I wonder when people are going to put their money where their mouth is and figure out what Hegelian dialectic is really about.
edit on 1-2-2013 by ThirdEyeofHorus because: (no reason given)

Originally posted by AfterInfinity
reply to post by Aloysius the Gaul


Fat lot of good capitalism is doing us now. Can't really argue over the pie if there's no pie to be had, right?


There is no "pie"
There never was a pie and the ignorant jackass who created that example should be kicked in the family jewels.

The potential for prosperity is not limited by an arbitrary number, dollar amount, set of circumstances or even imaginary baked goods.

There is the potential to make something of ones self or not.


Of course socialism does have the guarantee of artificial limitations placed on everybody but the ruling elite and their wealthy supporters.

Capitalist or socialist, you can always get corruption pie. All you can choke on.

Originally posted by sligtlyskeptical
Guess it just proves that he is not a socialist. I wish he was and was successful in getting socialist policies enacted. But he hasn't even really tried.

In the context of socialism.... how would you see Obama?


Originally posted by spacedog1973
Who claimed Obama was a socialist? Is someone throwing random words around again?

Newsweek called him a socialist? Does that mean that he is one?

socialism is for the people not the socialists.