MTV Stands for Masonic Temple Vision, & I HAVE PHOTOGRAPHIC PROOF! 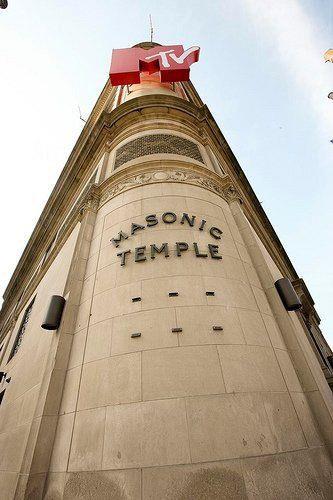 But it's not.
See: Wikipedia of The Masonic Temple of Toronto AKA The MTV Temple
edit on 31-1-2013 by NJoyZ because: (no reason given)

posted on Jan, 31 2013 @ 10:32 PM
link
I've seen plenty of old masonic buildings that have been turned into business.
Doesn't mean they are connected.

Originally posted by GmoS719
I've seen plenty of old masonic buildings that have been turned into business.
Doesn't mean they are connected.

Originally posted by GmoS719
I've seen plenty of old masonic buildings that have been turned into business.
Doesn't mean they are connected.

Link to image of building prior to MTV

For some reason your link didn't work, is this what you were after:
LINK
edit on 31-1-2013 by NJoyZ because: (no reason given)

TORONTO - After 95 years, the iconic Masonic Temple — the concert hall where Frank Sinatra, the Ramones and Led Zeppelin once rocked out — may permanently shut its doors and be turned into condos.

Bell Media confirmed Friday they “are considering all options,” including selling the historic building to developers, after they move their MTV Canada studios out of the six-storey landmark at the northwest corner of Davenport Rd. and Yonge St.

“We are moving the MTV studios to 299 Queen St. and, as a result, there will be no further production done at the Masonic Temple as of now,” Scott Henderson, Bell Media’s vice-president of communications, said.

It can't be used in that way any longer given there is nothing considered music being played on the TeleVision any longer.

It can't be used in that way any longer given there is nothing considered music being played on the TeleVision any longer.

Anyways, back to web browsing.

I haven't watched that channel since it came out in the 80's.

posted on Feb, 1 2013 @ 12:26 AM
link
Ugh, there are plenty of threads on this very subject already. This theory has been debunked in ad nauseam.

posted on Feb, 1 2013 @ 12:34 AM
link
Why would the freemasons let their symbols be used on TV considering the content of mtv? That would open them up to frivolous lawsuits, no?

posted on Feb, 1 2013 @ 01:08 AM
link
This thread is the epitome of why people make fun of conspiracy theorists. They find something they think has some great conspiracy meaning but don't do even surface level research to find out the truth. The truth, in this case, is much more mundane, and it took me 5 minutes on google to find it.

The masonic temple is no longer owned by any lodge, it was sold to MTV (who is now moving out). As part of its sell, due to its historical landmark status, MTV agreed to keep the style of the building in tact. This is a requirement that comes with the building - its listed as a historic building under the city's historic sites preservation program. That means whoever owns it agrees to keep its original facade and appearance. The reason why it says "masonic temple" on it now when it did not say so before is because the signing is part of it being registered as a historic landmark.

There is absolutely nothing unusual here.
edit on 1-2-2013 by thelongjourney because: (no reason given)


Originally posted by winofiend
Pretty sure MTV stands for Music TeleVision
It did once.
It can't be used in that way any longer given there is nothing considered music being played on the TeleVision any longer.

TV CAN NOT STAND FOR TELEVISION! TELEVISION IS ONE WORD, WHERE AS IN AN ACRONYM LIKE TV EACH LETTER MUST STAND FOR A SEPARATE WORD. SO TV MUST MEAN TEMPLE VISION.


You're being silly, right? We aren't talking about their Logo, we're talking about occult symbolism associated with the secretive rituals and codes associated with freemasonic brotherhoods. Things like, black and white checkers floors, pyramids with eyes in them, a hand over one eye, subliminal sexuality, representations of ancient gods and goddesses that only tree students of ancient history (or masonic brothers) would recognize, etc..

Check out this totally awesome related video I just found. it even has the picture I posted during the first few seconds:


If these videos prove anything, it is that I am not the first person who's had this idea.
edit on 1-2-2013 by NJoyZ because: (no reason given)

But then I saw this, and now I'm all like "O' Egyptian stuff, could be masonic, but maybe its just African Americans, connecting with they African roots."


Lets see: first thing in the video is the drawing of baphomet...which has absolutely no connection with freemasonry and does not appear in any masonic ritual. How can you take this stuff seriously when these videos can't even get the basics right?