page: 1
62
<<   2  3  4 >>
log in
join
share:
Arken
+36 more
posted on Jan, 31 2013 @ 05:02 AM
link
This incredible and clear Footage was captured by a commercial pilot over Costa Rica skies and show an bright/white unidentified flying object that travel at very high speed and rapidly moving below the aircraft. The footage corresponds to a flight on Wednesday, January 23, 2013.


The video was captured by the commercial pilot Joseph Daniel Araya, who has more than 500 flight hours. Araya says he was recording with his cell phone when suddenly the camera screen saw the object moving, When he looked out of the aircraft there was nothing, said the pilot.
[...] estimated that the object on the screen could have a length between 7 and 10 meters. Its speed could reach 3600 kilometers per hour, seven times more than the ship from which the footage was captured. 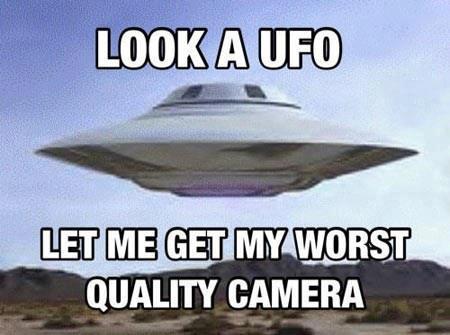 Hmm.Nice video but still cant be sure.
It can also be flare from the lens.
edit on 31-1-2013 by shivaX because: (no reason given)


WoW, frikin awesome!
I threw this up on the big screen and saw how the shadows beneath it changed
with the elevation of the terrain. I could not see any pixalation or distortion that would reveal CGI.
SnF. I also looked for something in the cockpit that would reflect internally, and found no evidence of it.
And at 0:36, when the disk passes through a sunbeam, the surface of the craft reflects the sun.
Now if one of the Dos Amigos put this up, I'd bet you would have 100 flags and 50 + stars.
Again SnF
edit on 31-1-2013 by Violater1 because: (no reason given)

Originally posted by homeslice
It does show up exactly when the lens is facing the sun...


That was the first thing which struck me too.

The zoomed in shot confirmed it.

Originally posted by Arken
This incredible and clear Footage


Lens flare.
No wait wait, it's a Costa Rican lantern!
Oh oh, wait, it's swamp gas, and it reflects the light from Venus.
Yeah, that's the ticket.

However, it is peculiar that it travels in a similar radial as the turning air plane.
It wouldn't be the first time that a UFO paced an aircraft.
edit on 31-1-2013 by Violater1 because: (no reason given)


Originally posted by Arken
This incredible and clear Footage

"The Incredible" is... your post...
In which kind of "Lens Flares World" do you live?

No one expert, with a brief knowledge of photographic skills, can subscribe your opinion.

The object is real and fast, really fast, and everyone can see that it shine when it pass throught the sunrays.


I trust you've filed an official request for the local radar data to back this up and will be checking with police departments in the area.

Mads1987
+18 more
posted on Jan, 31 2013 @ 05:34 AM
link
Not a lense flare
The object seems to be moving very smoothly at the same speed and direction, which it wouldn't do if it was a lenseflare since both the plane and the man holding the camera are in motion. A lens flare would usually accelerate the further it gets from the lightsource in the picture, but that doesn't seem to be the case in the video.
Also, as someone else pointed out, there is a clear shadow cast from the object onto the ground. (Watch in full screen).

Doesn't look like CGI
It doesn't resemble any of the CGI videos I've seen before. Those are usually way more detailed, because whomever made them usually wants to show off their skills. Could be a hoax like the videos from Jerusalem that surfaced 1-2 years back. But don't see why a commercial pilot would get involved with that?

posted on Jan, 31 2013 @ 05:34 AM
link
The footage is far from incredible, that could be anything, the picture quality is lacking detail and is too grainy to make any informed decision on what it is whatsoever.
edit on 31-1-2013 by michael1983l because: (no reason given)


Well I don't think anyone is actually holding that camera - it seems mounted inside the cockpit. The guy obviously didn't notice it until after seeing the footage. And it does fade out towards the end like a lens flare would.

And a shadow? you have got to be kidding - where?

posted on Jan, 31 2013 @ 06:10 AM
link
Unfortunately, it appears when the sun appears and disappears on cue exactly when the sun disappears on the other side. My guess is he may be one of those pilots who post recordings of flight, take off and landing and when he saw this he thought he'd have a laugh. Innocent enough, I suppose. But no UFO.


In the parts of the video that are zoomed you can see a small dark outline on the bottom of the object, which would also indicate that it farily close to the ground, as it moves along the dark outline move upwards and downwards as it follow the curvature of the ground beneath.
But the quality is very poor, so it is hard to tell and it might be some sort of artifact.


Thats not a shadow, it is most likely because of the poor video quality. The dark part jumps above the object half the time. How would a shadow on the ground do that?

Originally posted by magma
The aircraft is banking to the left.

I've tried running your theory over in my head a few times, and I simply can't see how the object could keep a straight trajectory if the plane is banking. Not unless the lightsource was moving aswell - which it couldn't be.