posted on Jan, 29 2013 @ 06:19 PM
link
OK, the name of the source page says it all. I find it amazing what some supposedly intelligent people actually believe. But a man buying a money spinning goblin to bring success and wealth to his transport business has to be very near the top of the list of "good grief Charlie Brown" stories.

According to the traditional healer, Mr Kamuyedza acquired a money-spinning goblin from a nearby country to boost the fortunes of his transport business.

He, however, decided to dispose of it after it started “to make extreme demands.’’ 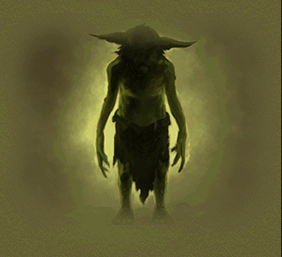 Sekuru Shumba [the healer] beheaded the goblin. Clever (the businessman), subsequently, told his wife to collect the US$15 000 from their car that was parked outside.

“That is when Sekuru shouted that the goblin was fighting back. All I remember after that is a loud sound coming from the bedroom. The walls of the house crumbled. Virginia and I struggled to get outside.”

A traditional healer and a survivor claim that the house in which they were carrying out a cleansing ceremony exploded after they beheaded a goblin.

According to the story, a man acquired the goblin from a neighboring country to bring wealth and prosperity to his business. But the goblin became troublesome, making demands, so he needed to get rid of it. The ceremony cost him $15,000.


He, however, decided to dispose of it after it started “to make extreme demands.’’

Maybe in ZImbabwe the words "goblin" and "in-law" are synonymous....

...c'mon, you knew someone was gonna say it.

Originally posted by Advantage
reply to post by happykat39


He, however, decided to dispose of it after it started “to make extreme demands.’’

Maybe in ZImbabwe the words "goblin" and "in-law" are synonymous....


Literally just spit out my wine

posted on Jan, 29 2013 @ 06:56 PM
link
Just when you think you have read it all, something like this comes along. Guess he didn't bother to video tape it, or take pictures did he.

posted on Jan, 29 2013 @ 07:11 PM
link
I thought it was common knowledge that money spinning goblins from out of state are bad investments.
Transporting juju across state lines almost never works out. Be safe and buy local goblins and get a bill of sale just in case.

The mysterious blast killed five people, including Sekuru Shumba, the businessman and a seven-month-old child. Investigators are still trying to establish the cause of the explosion that also damaged 12 other houses.

Sounds like a drug lab exploding with the wife running outside to grab the cash before it all went down!

posted on Jan, 29 2013 @ 07:52 PM
link
Once had me a "money spinning goblin..." but the ink got expensive, all that money spent to power the clothes dryers (not to mention all the poker chips) used to soften that goblin's output to make it feel more circulated; it all started to add up. "Goblins" can be demanding. Don't even ask me about the time one of my wives spilled water on him... And god! That time I let the f'er share a slice with me after midnight?! Phew!! Fuggetaboutit!
I called it quits when the Secret Service started nosing around my "goblin," talkin about charges and whatnot. Damn Obama!

posted on Jan, 30 2013 @ 06:19 PM
link
Goblin has been done on here before, if ya check out the youtube videos that say "human face goat" , it looks like the same thing to me.A deformed goat, the ears are giveaway.

Zimbabwe, as many countries in Africa, is so poor that life in an American slum would seem like a luxury to many of the people. Literacy is low, educational systems are often very limited, and as a result, people are often prey to ideas, scams, and schemes that you think no one in their right mind would fall prey to.

Cue the idea to "make money by extracting a powder called 'red mercury' that's used in explosives and sells for up to $300,000 per kilogram on the black market." Your average US citizen, with access to the internet, would laugh that idea down after a fast googling. But in a poverty stricken nation, with little internet access, it sounds plausible.

The story was fabricated so that the survivor wouldn't get blamed for taking part in an illegal activity.

Although Western nations may scoff, Zimbabwe has a long tradition of magic and rituals that has fascinated anthropologists for centuries. The culture and practices are rich and elaborate and serve to stabilize cultures when civilization fails them.

Anyway... a fascinating slice of crime and culture. Thanks for finding this one!