Inflation unchained: US dollar down 23 percent from 2000, Tuition up 72 percent

Here are two charts. They are STUNNING.

The first is the value of the US dollar, we know it's start, but there it is. 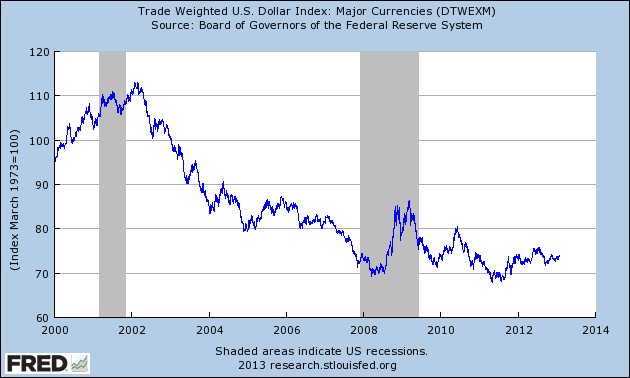 This one is the average income of somebody who HAS a college degree. 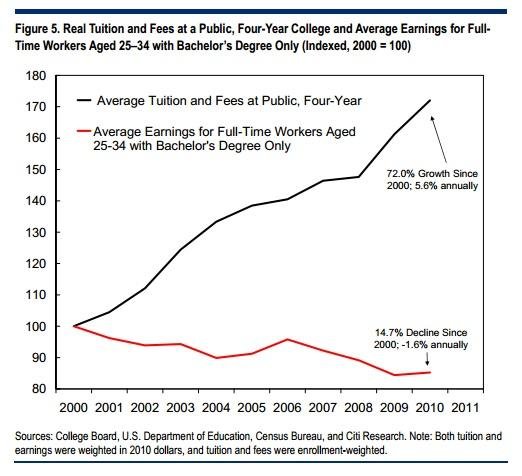 Just to be clear, the cost of tuition has gone up 72%, yet the average earnings are down 14%. How is it possible to stimulate an economy with an educated workforce when they cannot afford to get educated?

When they do get educated, they end up making very little in wages, compared to the mountain of debt they've been forced to amass to even get that crappy wage.

Housing prices are up 44% as well, so there goes the American dream. You can't go to college, graduate, get a good job and then buy a house anymore. You have to plan your whole life to get one piece of something and even then you're forced to pay far into your twilight years to settled the costs involved.

Personally I'm getting really tired and dumbfounded with the state of education, and the electorate's refusal to make it a top priority in current legislation. Solving the debt crisis and creating a sound fiscal environment is not ONLY about the stock markets.

It's about your workforce and the power of their dollar. It's about their education and the costs associated with it.

posted on Jan, 29 2013 @ 04:25 PM
link
I hear you. I graduated and every month the student loan company's take 100% of my money. It makes life very difficult. Almost so difficult that it has pushed me to doing criminal things. So far that hasn't happen. But who knows what the future holds.

Converting to a resource based economy is plausible, like converting the costs of things into gold and vice-versa.

The answer is certainly not cut and dry, nor will finding it be easy. What we do know is that what we have now, doesn't work.

posted on Jan, 29 2013 @ 04:40 PM
link
Yep, the dollar is collapsing, and our status as a leading superpower is collapsing with it. I just don't understand why our politicians don't care; are they really so short sighted and selfish that they would usher in the collapse of their own nation?

There are measures that can be taken to at least fight the collapse, but it's bread and circuses as usual, courtesy of Rome.

We're witnessing the downfall of many first world nations, namely those in Europe, and America, with her poor spending habits and lack of action, is undoubtedly to follow suit. I suppose the rich don't care, however, because once China becomes the new America, they will simply move their businesses there and slowly bleed the Chinese people dry as well.


I don't think it's possible for us to return to a gold-backed currency; there simply isn't enough gold, nor is there any inclination to from those with the power to do so.

I have to say I agree entirely.

The United States of America is Constitutionally empowered to create and use it's own currency. Why we *must* borrow it from a private bank is neither logical nor moral. Sort of like accepting that someone has a royal birth-right to rule over you .... the framework is the nexus of our economic oppression.
edit on 29-1-2013 by Maxmars because: (no reason given)


Oh, no, it's not about having that actual amount of gold available. You simple use the value of gold as the base.

For example, what is the value of 100 tons of silver, in gold? See where I'm getting at? As the amount of gold is finite, manipulation in the market, so long as you remove speculation is very difficult.

Anyway, in lieu of a solution from the politicians I'd accept in the interim an admission that we do have inflation.

Aren't they all claiming we are not suffering from an inflation problem? I think that is the official meme that the US economy has no inflation or a very small inflationary index?

Again, I am no economist but the price of goods and services continues to rise while wages and the value of the dollar fail to keep pace - what is that called?

Ya I hear that. lol. Food has been going up like crazy. They give us these little deals to make us think we are getting it cheap but were actually just getting the normal prices. And those prices are still expensive. The USA is a total fail these days. Thank god for eFoods. haha

I mean come on, this is ATS, and no one has commented on the dow climbing up a mountain since the start of the new year....

Why is everyone suddenly shouting economic glory? Good news is coming out of every crevice right now. Investors aren't shy at all. Housing is up, everything is up.....

Why do I get the sense that we're about to go off a cliff?

Does anyone else see this? Or is it really improving? I just don't understand how all these things can look so great, when the nation is in debt 16.5 trillion dollars, with a debt ceiling that keeps getting delayed, with QE3 buying bonds with unlimited money that they print..... I don't see how the stock market is doing so well.


The prospect of adding 12 million citizens through immigration reform means the housing market will rise. Buying a house means buying everything that goes inside it, etc. This is more than likely fueling speculation.

posted on Jan, 29 2013 @ 05:10 PM
link
This thread is true. Couple it with the fact that the statistics are averaged and you will find that the few highest paid individuals have had their salaries go way up while the middle to lower ones had a decline worse than the graph.


Yeah I see where you're going with it. It's a feasible idea, too. Unfortunately, the market thrives on manipulation.

Think about it, our entire economy runs on imaginary money. This imaginary money has an agreed upon value, and provided that said value is enforced, it matters little that the money has no intrinsic value, i.e. is not backed by gold.

Problems only arise when people begin to lose faith in the imaginary value of our currency. 16+ trillion dollars of debt, with no feasible plan to cut our government's haphazard spending habits, definitely warrants other countries becoming alarmed and vying to trade in other currencies than the dollar. We're pretty much in knee deep in an economic black hole at this point; the cuts we need to make are very drastic, and so I suppose our politicians figure they can keep ignoring our insurmountable debt until it's too late, and then proceed to get the hell out of Dodge, leaving the people to clean up their mess while they sip Pina Colattas in the Carribean.


That's why removing speculation from basic commodities would drastically improve and stabilize the economy.

You can do all the fancy cheating and financial tricks you want with luxuries, but we use to hang speculators for the things they do today.

posted on Jan, 29 2013 @ 06:07 PM
link
You do remember the current administration "cut out the middle men" and took over student loans right?

Before that college was expensive, but then again it has always been expensive, now it is more expensive, and inflation plays a role in that.

When the money supply is increased the value of the dollar decreases which means?

It takes more cash to buy the same products, and education is a product like anything else.


Perhaps that's part of the problem?

Treating education as a luxury instead of a vital necessity?

Other nations have taken education out of the hands of capitalists and they are doing quite well.


All I know is before Carters Department of education of the 70s we put men on the moon and post DOE we haven't done much anything noteworthy.

A persons educations is neither a privilege or a right because there are vast differences what most people call education.

Education is one thing intelligence is another today the world we live in education is nothing but indoctrination that produces the most unproductive members of society that there has ever been,

Once upon a time in America we produced some of the worlds most educated,most intelligent people in the world something we no longer do.

There are many problems in this country and that is in my opinion the most damning one it has never been an issue of money.
edit on 29-1-2013 by neo96 because: (no reason given)


Yes that's true, America was once the nation of great thinking and innovators. But while it was busy meddling in other people's affairs, other nations were focused on matching American in those industries and education fields.

They've now surpassed you and me in my nation up north and it's now time to buckle down and get back to business.