posted on Jan, 29 2013 @ 11:19 AM
link
Kazakhstan air carrier SCAT has lost a Bombardier CRJ2000 carrying 15 people and five crew members. The flight departed from Kokshetau and was scheduled to arrive in Almaty, when it crashed roughly 3 miles short of the airport. Weather in the area was reported as freezing fog and low visibilty. There are no signs of survivors, and the Kazakhstan transport prosecutors office has opened a routine investigation.

Kazakhstan's transport prosecutor's office has opened an inquiry into the crash of an aircraft operated by local carrier SCAT.

The prosecutor's office identifies the aircraft as a Bombardier CRJ200 and states that it came down 5km from its destination, Almaty, at about 13:00.

Flight DV760 from Kokshetau had been due to arrive at Almaty, the primary business centre of Kazakhstan, at 12:55 according to the flight status board at the city's international airport, which subsequently listed the service as a "late arrival".

The aircraft was identified as UP-CJ006, serial number 7413, originally built in 2000. The aircraft had operated over 25000 hours in service, with its last maintenance being in June of 2011.

Kazakhstan's transport ministry has identified the SCAT Bombardier CRJ200 involved in an accident outside the city of Almaty as a 13-year old airframe.

The ministry states that the aircraft had logged just over 25,700h in operation spanning 22,975 cycles, and gives the date of its "last repair" as June 2011.

I'm sure a powerful energy weapon that "could" create earthquakes would down any jet or plane that flew "through" the beam.....

I was trying to find a pic of that type of plane, since I have no idea what any of those numbers mean. Still not sure how big it is, but I did find this↓. The pic doesn't show much, aside from showing that the visibillity is/was definitely poor.

[color=ADC7C1]Kazakh rescue workers emerge from the fog at the crash site of a passenger plane near Almaty, Kazakhstan, Tuesday, Jan. 29, 2013. The jet carrying 21 people crashed Tuesday in heavy fog killing all on board, the airline said. 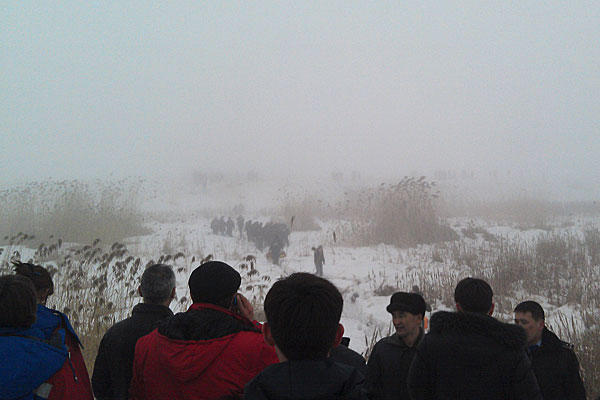 
This is the aircraft that crashed.

Hours is important so that you know when you have to do certain maintenance checks, but cycles is more important to life span of the aircraft. One cycle is a take off and landing. The reason that they are important is because every time you pressurize the aircraft you are expanding the fuselage, and then shrinking it when you depressurize at the end of the flight. So you're basically taking the metal and flexing it.

For a short haul plane, 25,000 hours is pretty common. So is a high number of cycles, although this one apparently was used for some longer haul flights prior to going to SCAT, because it only has 22,000 cycles in 12 years.

posted on Jan, 30 2013 @ 06:26 PM
link
The Russian Interstate Aviation Committee has taken control of the CVR and FDR from the crashed aircraft and will analyse them. SCAT has confirmed there were 16 passengers, including one child, and 5 crew on board the aircraft when it crashed. It was the first accident of the type in the country.

The Captain of the flight had over 1,000 hours in type, and over 18,000 hours total time. The crew is reported as being healthy and prepared for the flight. The aircraft had a 2A check in mid December. A 2A check is basically like an oil change and PM for the aircraft, where they check for any major issues with the aircraft at the same time.