posted on Jan, 27 2013 @ 12:43 PM
link
It IS a good read.
It also looks like wherever they were generated from has improved on clean edges of the circles too.

In spite of the grainy shots, the edges just don't look as clean to me.


That is a really thought-provoking article.

Thanks for the OP mate - its appreciated!

Here are the photo(s) to compliment your thread 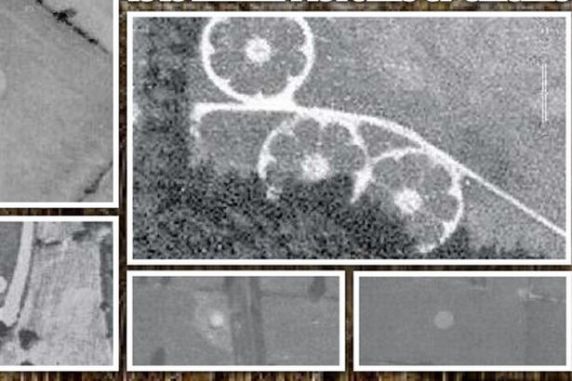 
Thanks for embedding the photo's I can never get it to work.

The photo's shown are from only my local area. This Australian chap has covered the whole UK it seems with his research. I will see if i can source any further material he may have unearthed.

posted on Jan, 27 2013 @ 01:21 PM
link
I am glad to see this thread. Not that it will do much good, though. Skeptical people will simply say that the hoaxerswere doing it back then as well. And they will ignore any evidence to the contrary. Crop circles are smoking gun type evidence of aliens, in my humble opinion. The arecibo reply glyph seals the deal for me. I have outlined why in the thread I will link below. www.abovetopsecret.com...

posted on Jan, 27 2013 @ 01:50 PM
link
Just because a circle made in the fields is old is absolutely no indication that it was made by anything other than humans. The overall reason behind tiny amount of the man made circles 60 years ago may have been different from the hoax orientated man made circles of today but just because they existed does not mean anything significant.


The circles in the photos are very likely not fresh. And that is why they don't appear as crisp.

posted on Jan, 27 2013 @ 01:59 PM
link
Very interesting. It amazes me how little we know about this planet and yet we purport to know the general science of the Sun, Moon, stars, planets, comets etc......


Of course the color photos are not from1945 and this one looks very sloppy/man-made: But what I'm trying to theorize is, if these formations are the result of some unknown electromagnetic resonance of sorts then, is it fair to consider Earth may be picking up more energy for some reason? Maybe she is getting ready to implode into a star in a few weeks.... as George Kavassilas would have you believe! But also, he's already conducting damage control by saying he might've gotten the date wrong. Imagine that! I don't care for people with microphones and an audience anymore


I love the way you can clearly see the regular 3foot wide tracks that make up the entire design in the photo you just posted. If there was ever a good example of a man made circle then that has to be it.
edit on 27-1-2013 by PhoenixOD because: (no reason given)

Originally posted by PhoenixOD
Just because a circle made in the fields is old is absolutely no indication that it was made by anything other than humans. The overall reason behind the man made creation of the circles 60 years ago may have been different back then but just because they existed does not mean anything significant.

Good point for we don't really know why the Nazca Lines/pictograms were formed either. Not all crop circles are circles.
Maybe its time we change the name. I liked Cereal Art myself. Not sure who coined that. Maybe Colin Andrews?
So many theories----so far away from the truth we remain.

funnily enough i live and work where these are reported to have been found, and also often work at a farm a short distance from the town - most likely the same village or within a mile or two of where these photos were apparantly taken...
i will ask a farmer i know about this and see if he can garner any news on this - though obvs the 70 yrs since this happened will prove problematic.. no promises on when i might hear something (if anything) though.

as for "non-alien" reasons as to why they could have happened, it's worth noting that stourbridge has a strong history of arts and crafts, as well as it's fair share of mystically minded and "out-there" folk - this could have been a form of artistic expression, which knowing more than just a little about the place, would not surprise me one bit.

ETA: ok, i'll admit i'm something of a luddite and cant seem to find the 1945 layer on google earth to look into this further and maybe apply some local knowledge, any advice greatly appreciated
edit on 27-1-2013 by skalla because: (no reason given)

posted on Jan, 27 2013 @ 02:13 PM
link
The "orange cut open" type markings are very similar to markings left by a group called Deer Tribe after they have had one of their 24 hour circle dance with regular approach to a middle person/object.

You know where they usurp old traditional native american culture and spice it up with their own inventions - then calling it ancient.

In times gone past I programmed a small sequence for the game Neverwinter Nights where a group of dancers did just that. My brother-in-law composed a piece of music for it which was called Wokka-Wokka ( inspired by the often weird australian place names ).

posted on Jan, 27 2013 @ 02:14 PM
link
Hi all, havnt got the time for a long post, but just thought i'd chime in my initial observations about this, it reminded me of that coin , from a few hundred years ago, the pattern i think is what reminds me, Someone will know the coin of which i speak its been covered in the UFO threads before on ATS.

I have a feeling that the simplest ones, the ones showing
only ONE simple circle, could be the landing spot of a saucer. . .?

I have a feeling that the simplest ones, the ones showing
only ONE simple circle, could be the landing spot of a saucer. . .?


Or a young couple making out in the middle of a field where the crops are to high for anyone to see...ahh brings back memories

posted on Jan, 27 2013 @ 09:51 PM
link
I am not prepared to make an argument at this time, but crop glyph followers would be well advised to do a simple Google search on "Old Crop Circles". One of the very first results will turn up a very good data base on crop glyphs pre Doug and Dave. When viewed from the skeptical standpoint, their argument is reduced to laughing stock, especially when one reads accounts from 1950 and priorn which the witness actually watched these things form.

posted on Jan, 27 2013 @ 10:28 PM
link
These old ETs were really lacking into design creativity department, just boring circles... Good for them to improve their design and style with the time. The same can be said about their flying saucers because they were really so old school in style

posted on Jan, 27 2013 @ 10:40 PM
link
Cool report! I did start scanning some of the 40's photography on GE but was annoyed it doesn't quite show Wiltshire (in fact, it cuts off back to modern imagery about 5 miles from my house, damn it, I very much wanted to see my town from the 40's!!)

As for the subject matter, no doubt they've been around a long time, I can believe that!

According to Mrs Dutton, crop circles regularly appeared on her husband's farm between 1914 and 1956

Before today’s circle-makers entered the picture, there had been scattered reports of odd patterns appearing in crops, ranging from 17th century pamphlets to an 1880 account in Nature to a letter from astronomer Patrick Moore printed in 1963 in New Scientist.