posted on Jan, 25 2013 @ 11:25 PM
link
Just now, I decided to type in "life on moon" into Google. The first result I got was from November 9th 2012. Apparently, a Russian found alien life on moon on Feb. 1972. The article states that they drilled a hole with a ten inch, hollow core bit to "collect another regolith sample that was also hermetically sealed on the moon." When they examined their findings, the biological nature of some of the particles(despite hundreds of photographs)was missed continually. I found this to be interesting. I would like to get my fellow ATSers feedback on this article. Has it been debunked already?


I think that was fossilized earth microbes, from when the moon was chunks blown off the earth. I could be wrong who knows for sure?
edit on 25-1-2013 by zonetripper2065 because: (no reason given)


I think that was fossilized earth microbes, from when the moon was chunks blown off the earth. I could be wrong who knows for sure?
edit on 25-1-2013 by zonetripper2065 because: (no reason given)

I'm not saying your wrong but thats such a convenient excuse to explain away anything that might give away their secrets.


Well I'm not going to worry about the authenticity of the account, but if the moon was formed after a collision with the Earth, it stands to reason that any fossil containing rock that was ejected into orbit, would still be out there.

As Zone said. It's not a convenient way to dismantle and deny evidence. It's just a fact.

It's about as close a body in space to the Earth that we're going to get. It's very certain to attract flies... so to speak.

But as a species we're really quite arrogant and seemingly not very humble when it comes to our own intelligence. I still hold the opinion that we don't know what forms of life can exist in very extreme environments. We still find places on Earth so hostile it is impossible to sustain life, yet we find it thriving there.


Uhhh...I think that if the Russians had gone to the Moon we would know about it.

It's not exactly something you can hide...that being a Gigantic Rocket launching into space that has a huge heat signature and radar cross section that would be monitered. Nevermind the Russian crews radio contacts between themselves and the Russian Ground Control.

Apollo Missions had their radio communication continually monitered by both the U.S. and thousands of HAM Radio operators all over the World. These HAM Radio operators were able to triangulate the Apollo Spacecrafts position from the Earth to the Moon the entire way as well as know EXACTLY where each missions landing location was.

So it is IMPOSSIBLE to Rocket to the Moon in a massive craft back in 1972 and even today without someone knowing about it.


It was an unmanned probe
Luna 16


Oh...OK...I must have misread as I thought they were saying a Russian collected this sample on the Moon.

The OP's linked story has a gaping hole in it - namely the historical context.

In the early '70s the Soviet space program was reeling. By the time they had their spacecraft intended for manned circum-lunar missions (Zond) debugged, the Americans had already made manned landings. The Soviet manned landing program was in shambles. Although they successfully flew their LK lunar lander in Earth orbit (a mission equivalent to the US flight of Apollo 5), they could not get their massive and complex N1 rocket to fly without blowing-up.

Part of the problem with the Soviet space effort was that they had several different programs competing for funding. In addition to the two aforementioned manned-lunar programs, they also had two unmanned lunar programs, (the "Lunokhod" rovers and the sample-return missions) and two manned space-station programs (Salyut and its secret military counterpart, Almaz), not to mention two high-profile interplanetary programs (Venera, which ultimately succeeded and Mars, which did not).

When it became obvious that Apollo was a success, the Soviet propaganda machine announced that the USSR never intended to land men on the Moon, preferring instead to use unmanned probes for exploration while concentrating their manned effort on Earth-orbital "Salyut" space stations. Gullible western media swallowed this lie hook, line & sinker.

After a rocky start (which included the highly publicized crash of Luna-15 while Apollo 11 was still on the lunar surface), the Soviets successfully landed a rover and completed its first robotic sample return mission in 1970 (while Apollo was grounded following the near-disaster of Apollo 13). Another rover landed in 1973 and two more sample return missions succeeded in 1972 and 1976 (The total weight of lunar material returned by these three missions was roughly half-a-pound, recovered from wherever the probe happened to land. This is in stark contrast to the 800+ pounds of rock & soil samples carefully documented & collected by the Apollo missions).

The Salyut program got off the ground in 1971. In June, the crew of Soyuz 11 docked with the world's first manned space station and spent 3 weeks there - setting a new spaceflight endurance record. But triumph turned to tragedy when their Soyuz capsule depressurized as they were returning to Earth, killing all aboard. Their next station, "Salyut 2" (actually an Almaz station) launched in 1973, but failed before the first crew could arrive. Months later, the entire Soviet space station effort was upstaged by the spectacular US "Skylab" station, which was much larger and allowed new manned space records to be set.

This brings us back to the OP:

The Soviets needed a win - very, very badly. If they could have discovered evidence of extraterrestrial life from their cheap probes - evidence that the expensive American program failed to uncover - then the boost to Soviet prestige would be incalculable, and the humiliation to the "successful" Americans would be total. That they made no such announcement makes a crushingly-strong argument that no such discovery was made.

So what is that circular thing in the OP's linked article? Well that's easy: It's a "zap-pit". Both the Americans & Soviets (and scientists from all over the world who studied the returned lunar material) found them all over the samples.

Have you ever hit a rock with a hammer? If you do, and examine the broken material, you will notice that there are a lot more smaller pieces than large ones. In fact, the smaller the fragment, the more of them there are. Similarly, out in space there are a lot more small bits of debris left over from the formation of the solar system than there are large ones. Some are as small as the particles found in cigarette smoke. Our atmosphere shields us from these high-speed flecks. When we see a "shooting star", the actual meteor is typically around the size of a grain of sand.

Our moon does not have an effective atmosphere that can stop meteors of any size. They all - down to the smallest dust-mote - hit the ground at several miles per second. Note that when I say "ground", I may be referring to a rock on the surface or even an individual particle of dirt. When a smoke-sized dust-dot hits a dirt-speck at that speed, you still get an explosion - albeit a very small one (take THAT, Whoville!) that leaves a crater that geologists whimsically called "zap-pits".

Here is another picture of one: 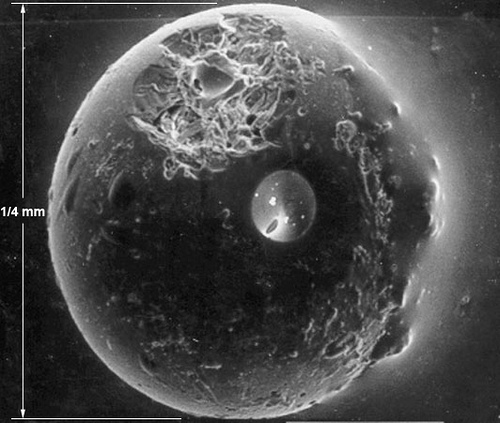 They can come in any size, with the upper limit being whatever it takes to shatter the target rock/particle.

Have you heard about the book or its PDF :
PENETRATION
Ingo Swann, 1998.

With that you WILL know if there is life on the moon, AND
which type or kind of life ! !