I Stumbled Across this Compilation of Animal Reunion Stories Today. I Really Enjoyed them so I Thought I Would Share. Have a Box of Tissues Nearby Because some of these Stories are Real Tear Jerkers.

Ban was reunited with her owner in tsunami-ravaged Japan after a news channel aired dramatic footage of her being rescued from the sea. This is pure joy.

Joplin's owner was incarcerated for 3.5 years. Would Joplin still remember her after all that time apart? (The answer, of course, is yes, but don't let that stop you from watching this beautiful video)

In 1969 a young Australian, John Rendall and his friend Ace Bourke, bought a small lion cub from Harrods pet department, which was then legal. 'Christian' was kept in the basement of a furniture shop on the Kings Road in Chelsea, the heart of the swinging sixties. Loved by all, the affectionate cub ate in a local restaurant, played in a nearby graveyard, but was growing fast...

A chance encounter with Bill Travers and Virginia McKenna led to a new life for Christian. He came to live in a huge enclosure and to sleep in a caravan at their Surrey home. Then in 1971 he was flown to Kenya, his ancestral home, and returned to the wild by lion-man George Adamson. Nine months later in 1972, John and Ace returned to Kora in Kenya. This clip is of their reunion at that time.

It was an emotional reunion: "He ran towards us, threw himself onto us, knocked us over and hugged us, with his paws on our shoulders."

Chuck being reunited with his family, the Nakkim's, after 4 1/2 years of living on the streets. Same collar. Same tag. He went from 100lbs. to 60lbs.


Reunion between Anita and the wolves

Anita had not been in Polar Zoo in about 2 months. When she returned i had the chance to film her first meeting in a long time with the wolves she spent a long time socializing from 16th of May 2008. The video is recorded in Polar Zoo and any questions related to socializing process should be taken with them.

One family's search for their dog they had to leave behind during Hurricane Katrina is finally over.
Katrina's Animal Rescue covers the dramatic struggle to save the 'other victims' of the Gulf catastrophe. Exclusive footage reveals selfless heroism and amazing stories of survival on the streets and rooftops of Louisiana and Mississippi. 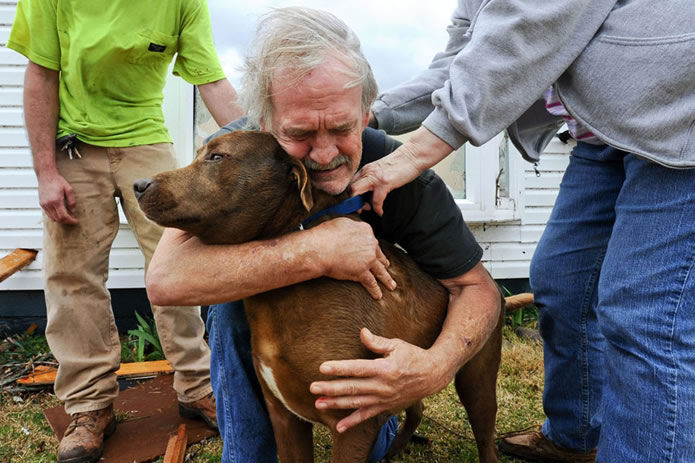 Greg Cook hugs his dog Coco after finding her inside his destroyed home in Alabama following the tornado in March 2012.

Only Greg Cook's beloved dog Coco was home when a tornado tore through his home in Limestone County, Ala.
Cook rushed home after the winds had stopped to find his house and 50 others destroyed. While homes can be repaired, it was his chocolate Labrador that he feared he'd lost forever.
But like the rainbow at the end of the storm, there was some good news when Cook was reunited with Coco, who managed to survive the Category-5 tornado.
Cook sifted through the debris and crawled through a window to find his dog soaking wet and shaking in a hallway.
"It was just such a relief, I was happy to see him," said Cook, who was in tears when they were reunited. "I love my dog, he's my best friend and I was just so happy to see him."

Man Reunited With His Childhood Friend Gorilla and Gorilla won't let him go.


Lavern's Rescue During The Tornado 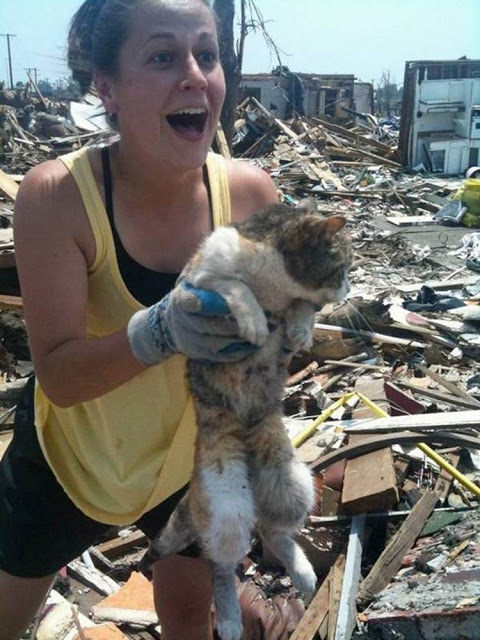 For 16 days, Lavern, a 13-year-old cat, was buried beneath the rubble of a house in Joplin, Mo. Her owner, Terrla Cruse, assumed her cat had died. But when she and her sister returned to the house to look for some papers, they heard meowing and began to dig frantically. Lavern's head soon emerged and Terrla's sister was quick to take a photo of the moment.

To say that our boxer, Chuck, was excited to see him come home is an understatement. (And if you're wondering why it says "again" it is because we went through this a year ago as well. That video is also posted.)

Jared Is Reunited WIth His Lost Cat

Clyde had been missing for 12 days before someone found him and returned him while 10-year-old Jared was at school. Jared's mom decided to surprise him, and a lovely, tearful reunion followed.

Our 11 year old cat, Clyde, had been missing for 12 days. My 10 yr old son Jared has always had Clyde in his life & he (and us!) were devastated. A lady saw my Lost & Found ad and I picked up Clyde while Jared was in school! Incredible reunion of Jared and Clyde! Get out the tissues!! Can you tell I'm crying through out this video? If you love happy endings, this video is for you! Also, check out the video made shortly before Jared came home of my German Shepherd, Triton--who was heartsick over Clyde being gone. In no uncertain terms, both showed each other how much they had loved and missed each other!

Maynard was reunited with his owners after a series of minor miracles just before Christmas in 2009. He'd been missing for two years before that!

Okay, so this isn't exactly an animal-human reunion. But it is heartbreaking and amazing. Karma is reunited with her calf after they've both been rescued. Yes, it's okay to cry now.

I Don't Know What to Say? - I feel so Warm and Fuzzy Inside, this was so Beautiful to Watch.
I especially liked Karma's story - Animals have so much Unconditional Love.

posted on Jan, 23 2013 @ 09:38 AM
link
Well, you weren't lying about the tissue.
Seeing the daughters reaction to the first "Chuck" dog was priceless.


Those videos are awesome, dogs truelly are mans best friend, but when it came to Jared and the cat, well sorry but that cat didn't give a sh1t, he actually looked pissed off for being woken up!


And Jared was so Happy to see Clyde. What is it with Cats?

posted on Jan, 23 2013 @ 10:20 AM
link
Good thread. It's nice to see something other than the doom and gloom we've been seeing lately. My favorite was christian the lion, it's amazing how powerful love is.