posted on Jan, 20 2013 @ 05:34 PM
link
Albeit from the 'International Metaphysical University' it's been recently reported that this year historian and UFO researcher Richard Dolan plans to teach an online Ufology course to the general public via 'a series of 12 riveting lectures'.

In the vid below he states he believes that a great many people are quietly interested in UFOs and the course will present a fresh exploration of 'the most fascinating subject in the world' - he also mentions that after conducting two decades of study on the topic, he's convinced that there is a phenomenon occurring which is real and which is not explained in our official version of reality.

A proper study of Unidentified Flying Objects (UFOs) is a broad undertaking, involving many separate disciplines. Unfortunately, there are very few college-level courses that deal with this subject at all. Fewer still that make an effort to cover it in a balanced manner, and probably none that address the full spectrum of issues related to it.

This is a comprehensive overview of the UFO phenomenon for people of the 21st century. It provides up-to-date information and analysis relating to the full history of UFOs, from ancient times to our own era, focusing on the most significant and instructive cases..


Titles of the lectures include 'What Are UFOs?', 'The Early Cover-Up' and 'The Growth of Ufology' and whilst I don't always agree with Richard Dolan's opinions, his work on historical aspects of the UFO subject like government documentary evidence, highly dubious official UFO explanations and the way the USAF manipulated 'actual unknown' statistics are pretty hard to dismiss.

He also discusses the detailed nature of some of the military UFO reports; simultaneous radar/visual incidents and the importance of separating the mundane from the truly puzzling UFO cases so I suppose that can only be a good thing.

That said, his recent association with the Exopolitic crowd and assumptions made in his new book 'A.D. After Disclosure' have made me a bit wary about his convictions (and credibility) - it looks like all links to the IMU are down at the moment but I am sincerely hoping the course is free..


Richard Dolan is offering something never seen before in any academic setting, anywhere else in the world: a complete and fresh study of the entire UFO phenomenon.

Through a series of twelve riveting lectures, Richard Dolan provides up-to-date information and analysis relating to:


1. The full history of UFOs, from ancient times to our own era, focusing on the most significant and instructive cases.


2. The political issues, such as the how the U.S. government and the military and intelligence communities deal with UFOs. This includes the issue of whether some UFOs are made by “us” and what might be the true structure of secrecy.


3. The philosophical and investigative problems brought about by UFOs, including how ordinary objects and events might fool us, and how they differ from “true UFOs.” Moreover, in an age of the internet, Facebook and Youtube, when information practically overwhelms us, how to separate fact from fiction, legitimate issues from fear-mongering or fantasy-peddling.


4. The science behind UFOs, from propulsion technologies to space travel to consciousness itself.


5. The beings behind the phenomenon, whoever and whatever they are. The history and claims of contact, explores the nature of that contact, and asks pertinent questions about just who and what we are dealing with.


6. A look into the future, especially focusing on such issues as disclosure. Can UFO secrecy ever really end, and if so, what might a post-disclosure world look like?

What Are UFOs?
Theories of Ancient Visitation
Into Modernity: Airships, Foo Fighters, and Flying Saucers: 1896 to 1969
The Early Cover-Up, and those who fought it
Digging Deeper: The Breakaway Civilization
High Strangeness: UFOs from 1970 till 1990
UFOs from 1991-2012
Contact and Abduction
The Growth of Ufology, 1970s till today
Who Are They? What Are They? What Do They Want?
Weird Science: Propulsion, Energy, Spacetime, and Consciousness
Into the Future, Into Ourselves

Are you on commission?

This video and post is just an advert for an online coarse that costs over $400. I think ill keep my money thank you very much.

Are you on commission?


No, never made a penny out of UFO research - where did you see the course cost $400 and did you not read this bit of the thread?


That said, his recent association with the Exopolitic crowd and assumptions made in his new book 'A.D. After Disclosure' have made me a bit wary about his convictions (and credibility) - it looks like all links to the IMU are down at the moment but I am sincerely hoping the course is free..

If Richard Dolan actually is charging $400 then I'd advise people to steer well clear as most of the historical military UFO reports and government documents he mentions are available free online anyway.


Hands up if you want a degree in Ufology? 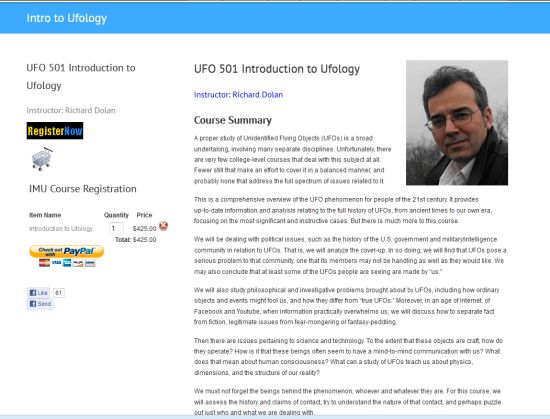 Hands up if you want a degree in Ufology?


Hey Galactictuan, if you've not read it before then some of the literature mentioned in this post is a good start.

Who knows, maybe a degree in Ufology listed on a resume would actually stop a person getting a job.

Nice one, other links I tried to the 'International Metaphysical University' were off line before so I didn't know if he was charging or not.

Seems a bit steep just to hear someones opinions - I guess Mr Dolan is going down the Mr Greer path.

It's shame because 'UFOs and the National Security State' was a very good book - it's linked in the first post on free E-book format, have you read it?


If the links were down you were not to know i guess.

I agree $425 is a bit steep, its not far off what 'bag man' Greer was charging for his exoplotics lectures a few years back. I sure wouldnt mind a 100 people signing up to a course id made at 400 bucks a piece. I think id tell them anything for that kind of money lol.

This started off as a free course as long as people applied and agreed to the reading list he provided. When I looked last year it was certainly free so he might well have figured a few dollars for the efforts were worth taking a punt on? Time is money and he has bills to pay like anyone else.

If people want to pay for the course, fair enough.

Personally I prefer being self-taught and seeking the wisdom of researchers via e-mail and blogs. Each to their own and the lecture titles look reasonable enough...no words like *proof* or *disclosure!*

posted on Jan, 22 2013 @ 02:27 PM
link
Dolan's two volumes of ""UFOs and the National Security State" are interesting reading. Where he lost me was when he stopped talking about the facts and speculating on them and started to simply speculate.

I'd prefer it if he finished his third volume of "UFOs and the National Security State".


One thing I thought was cool was the Richard Dolan show.

I mean, the intro music at least is awesome right?